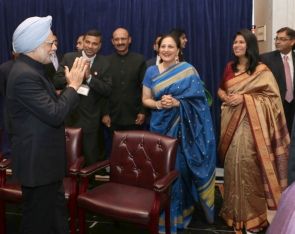 Prime Minister Manmohan Singh on Monday concluded his visit to America where he held talks with United States President Barack Obama and met his Pakistani counterpart Nawaz Sharif for the first time, besides addressing the United Nations General Assembly.

Singh left the JohnFKennedyAirport in New York for Frankfurt where he would have an overnight stay before arriving in New Delhi on Tuesday.

The prime minister reached Washington on September 26 and held talks with Obama the next day during which they decided to expand ties in various areas including defense, energy and trade. "We believe that if there's a strong India, that's good for the world, and it's ultimately good for the US," Obama had said in a joint appearance with Singh.

Immediately after the meeting, the two countries issued a joint declaration on defense co-operation, which brings India at par with the closest American allies like Britain. The prime minister flagged India's concerns over terrorism emanating from across the border and described Pakistan as "epicenter of terrorism".

In a rarest of the rare gesture, Obama himself walked down from the Oval Office to Singh's car to see him off. Singh reached New York on September 27 where he held a meeting with the top American CEOs.

Singh in his first meeting with Sharif, after the latter assumed charge as Pakistan's prime minister in June, made it clear that ending ceasefire violations is a pre-condition for taking the relationship forward.

A day earlier, Singh addressed the UN General Assembly wherein he raised concerns over terrorism coming from across the border. He also spoke on security council reform and reiterated that diplomacy be given a chance in resolving the crisis in Syria and Iran.