Delhi: Constable among 4 killed in violent clashes over CAA, 50 injured

The violence-affected areas witnessed several rounds of stone-pelting from pro and anti-CAA protesters.
At least 11 police personnel, including DCP Shahdara and ACP (Gokalpuri) were injured.
2 CRPF personnel were also injured.
All private and government schools in Northeast Delhi district will remain closed on Tuesday. IMAGE: A pro-CAA protester throws a stone during a clash between supporters of the amended citizenship act and those who are protesting against it, in New Delhi, on Monday. Photograph: Danish Siddiqui/Reuters

A head constable was among four people killed and at least 50 others, including several paramilitary and Delhi Police personnel, were injured as violence spiralled over the amended citizenship law in northeast Delhi, turning it into a battlefield on Monday with frenzied protesters torching houses, shops, vehicles and a petrol pump, and hurling stones.

This is the second day of clashes in the city where United States President Donald Trump arrived on Monday evening on the main leg of his India visit. 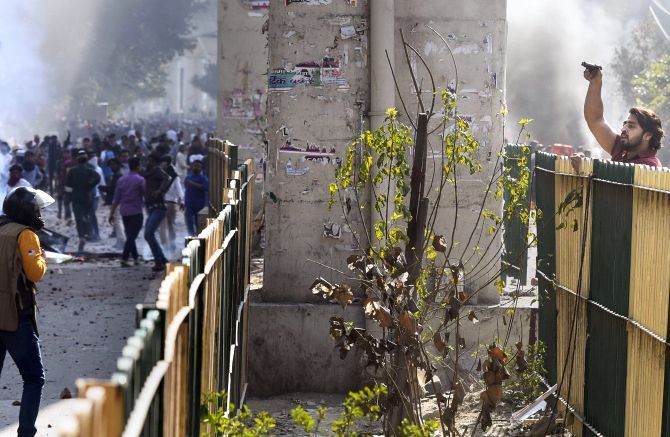 IMAGE: A protester brandishes a pistol during the clashes at Jaffrabad in Northeast Delhi. Photograph: Ravi Choudhary/PTI Photo

Security personnel conducted flag marches and prohibitory orders were clamped to bring the situation under control.

Ratan Lal, 42, a head constable attached to the office of the ACP Gokalpuri, died after he sustained injuries during stone pelting at Gokalpuri. 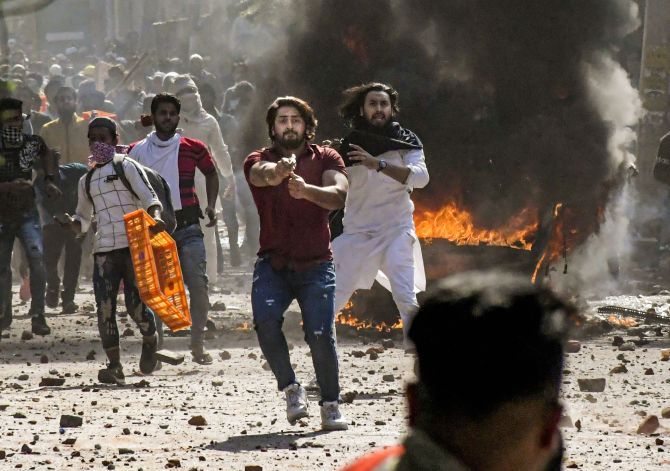 IMAGE: He aimed his gun towards the Delhi Police personnel, but fired a few rounds in air later. Photograph: Ravi Choudhary/PTI Photo

Three other civilian succumbed to injuries in the clashes, a Delhi government official said, adding 50 people with injuries had come to hospital for treatment.

Government sources said the violence in the national capital appears to have been 'orchestrated' by some for publicity as it comes at a time when Trump is visiting the country.

They said Delhi Police Commissioner Amulya Patnaik was stationed at the police control room and closely monitoring the situation. 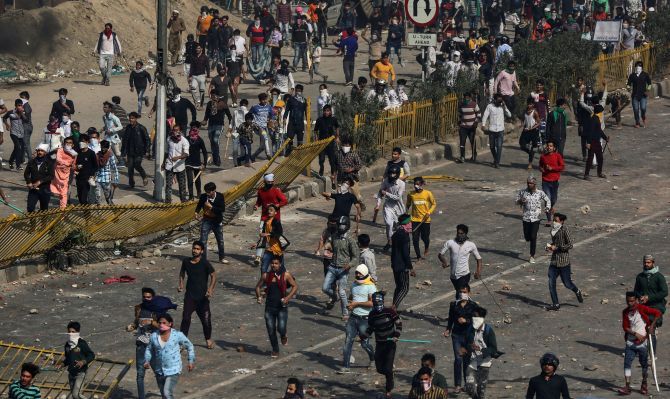 IMAGE: This is the second day of clashes in the city where United States President Donald Trump arrived on Monday evening. Photograph: Danish Siddiqui/Reuters

Union Home Secretary Ajay Bhalla told reporters the situation in the national capital was fully under control and sufficient forces were deployed on the ground.

Officials said at least eight companies (100 personnel each) of central armed police were present on the ground, besides the Delhi Police.

All private and government schools in Northeast Delhi district will remain closed on Tuesday in the wake of the violence, Deputy Chief Minister Manish Sisodia tweeted.

The violence-affected areas witnessed several rounds of stone-pelting from pro and anti-CAA protesters.

The roads were strewn with bricks, stones and glass shards. 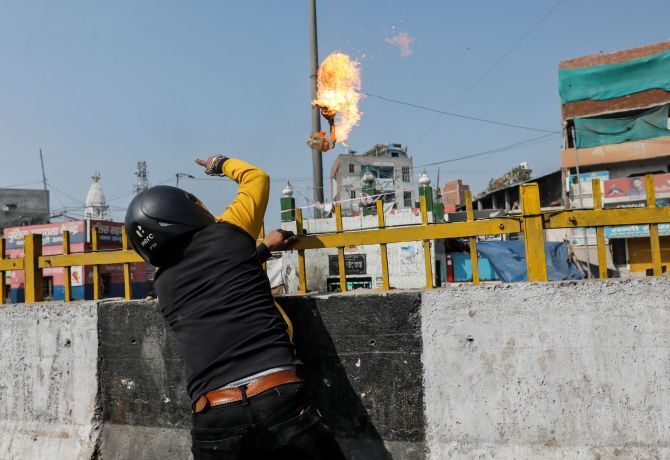 In Maujpur, pro and anti-CAA protesters indulged in stone pelting and at least three vehicles were torched. Even closed shops were vandalised.

At least one house was set on fire and plumes of smoke bellowed from the balcony.

A protester fired multiple rounds in air as a policeman was seen trying to stop him. The man was later identified as Shahrukh, according to Delhi Police sources.

Pro-CAA protesters were also seen gheraoing and assaulting a man at Maujpur. Blood was oozing from his head, while some of the attackers raised provocative slogans. 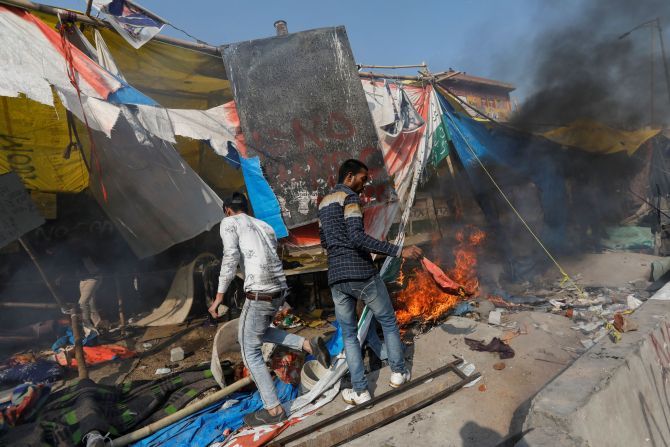 A petrol pump and two school buses were torched at Bhajanpura-Yamuna Vihar border during the rampage by the protestors.

Police chased and hit at least four young men with batons near a footbridge on one side of the road, where dozens of personnel were deployed in anti-riot gear, a PTI reporter witnessed.

At least half a dozen youths were also picked up in a truck by the police.

Another identified man was chased down and assaulted as he ran to escape the mob on an intersection under the Gokulpuri flyover at around 6.30 pm. 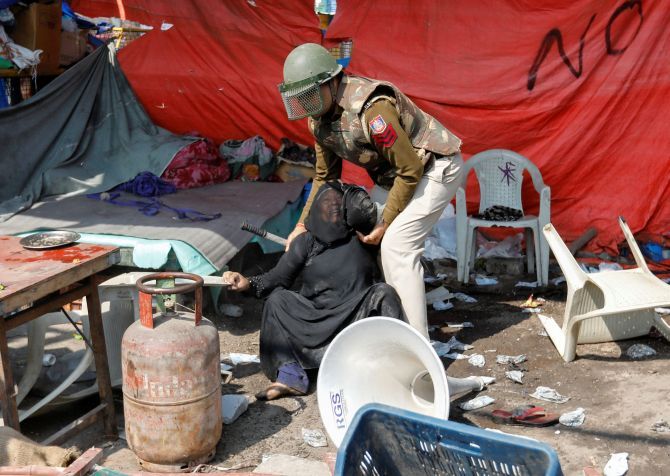 IMAGE: A policeman helps a woman injured in the clash. Photograph: Danish Siddiqui/Reuters

Police have imposed section 144 of the Code of  Criminal Procedure, which prohibits assembly of four or more people, in areas affected by violence in northeast Delhi.

Vehicular traffic remained restricted on road number 59, which leads to Bhajanpura on one side and Ghaziabad via Gokulpuri flyover on the other side, causing inconvenience to commuters and locals, including students.

At Gokalpuri, protestors resorted to stone pelting in which Head Constable Ratan Lal was killed.

At Bhajanpura Chowk, a fire tender was damaged by the protesters after it responded to an emergency call in the area. 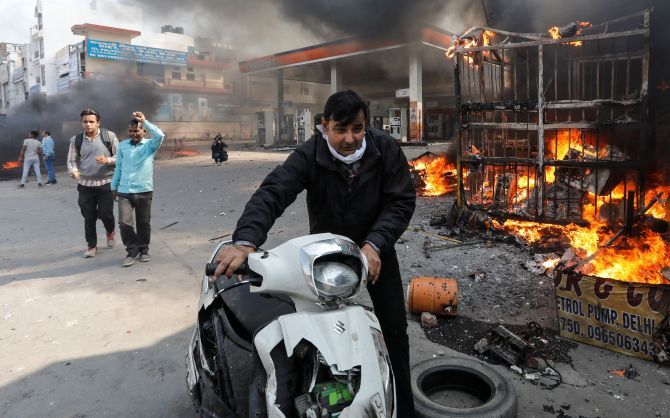 IMAGE: A man pushes his damaged scooter past a burning petrol pump during the clash. Photograph: Danish Siddiqui/Reuters

There were many who were caught in the crossfire.

"I don't know how are we going to go back home now," a woman hawker, standing along with a fellow hawker at C Block Yamuna Vihar bus stand, wondered as they waited for a DTC bus.

A 20-year-old man carrying a helmet said he had to leave his motorcycle in Gokulpuri as he tried to make his way to Mustafabad but was stuck at barricades put by the police.

"My sister works there and she is calling me repeatedly, asking me to come and take her home in this situation. I am unable to find a way to reach her," the man, visibly worried, told PTI. 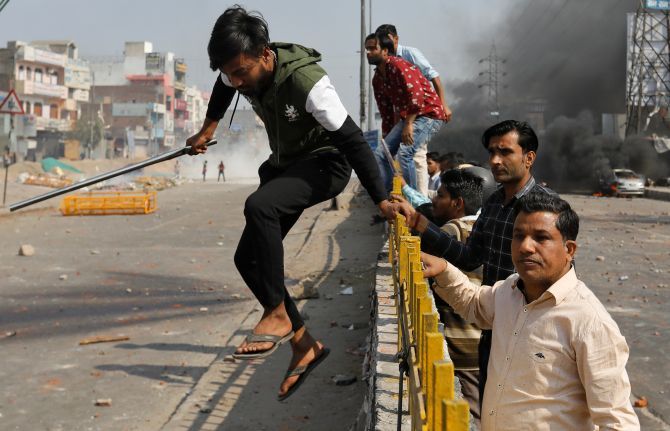 IMAGE: People supporting the CAA jump over a road divider during the clash. Photograph: Danish Siddiqui/Reuters

A family from Aligarh district in Uttar Pradesh which had come to Rohini for a member's treatment was also left stranded.

"Five of us, including two women, had come here in the morning. Rest four are still at the hospital in Rohini and I had come here for some work.

"Now I am waiting for the violence to end so that I can go pick them up and we all can return home," a man, who identified himself as Abhishek Thakur, said as he sat on a pavement with his hatchback parked near Dayalpur police station.

Violence had occurred on Sunday also over the amended citizenship law near Jaffrabad over blocking of the road by anti-CAA protesters , while similar sit-ins were launched in several other parts of the national capital including Hauz Rani. 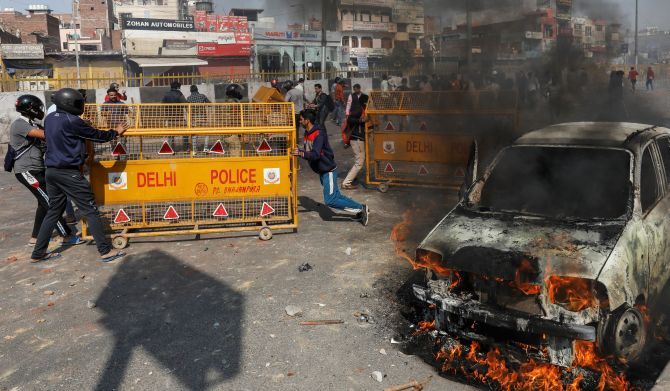 Chief Minister Arvind Kejriwal urged the Centre to restore law and order in the national capital.

'Very distressing news regarding disturbance of peace and harmony in parts of Delhi coming in. I sincerely urge Hon'ble LG n Hon'ble Union Home Minister to restore law and order n ensure that peace and harmony is maintained. Nobody should be allowed to orchestrate flagrations (sic),' Kejriwal tweeted. 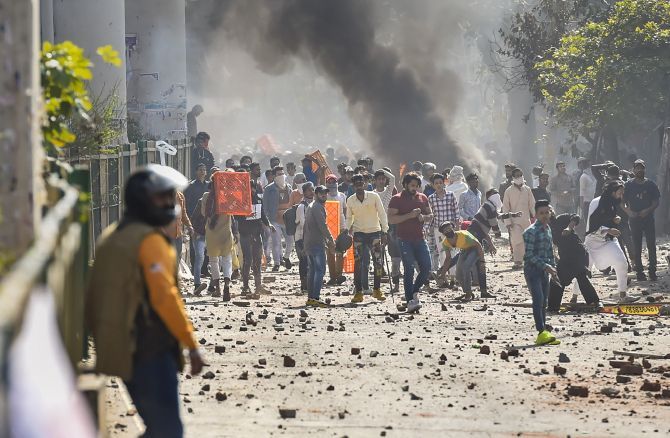 In a tweet, Sisodia said all internal exams scheduled for Tuesday in schools in northeast Delhi will not be held and he will speak to Union Human Resource Development Minister R P Nishank on the issue of postponing the Board exam in this district.

Taking to Twitter, Baijal said, 'Instructed @DelhiPolice and @CPDelhi to ensure that law and order is maintained in North East Delhi. The situation is being closely monitored. I urge everyone to exercise restraint for maintenance of peace and harmony.' 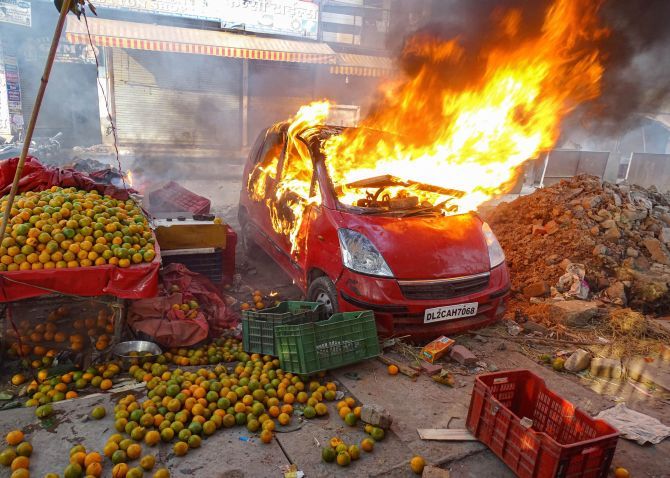 Congress leader Rahul Gandhi on Monday condemned the violence in Delhi and urged people to show restraint, compassion and understanding irrespective of the provocation.

He said peaceful protests are a sign of a healthy democracy, but violence can never be justified.

'The violence today in Delhi is disturbing and must be unequivocally condemned. Peaceful protests are a sign of a healthy democracy, but violence can never be justified.

'I urge the citizens of Delhi to show restraint, compassion and understanding no matter what the provocation,' Gandhi tweeted. 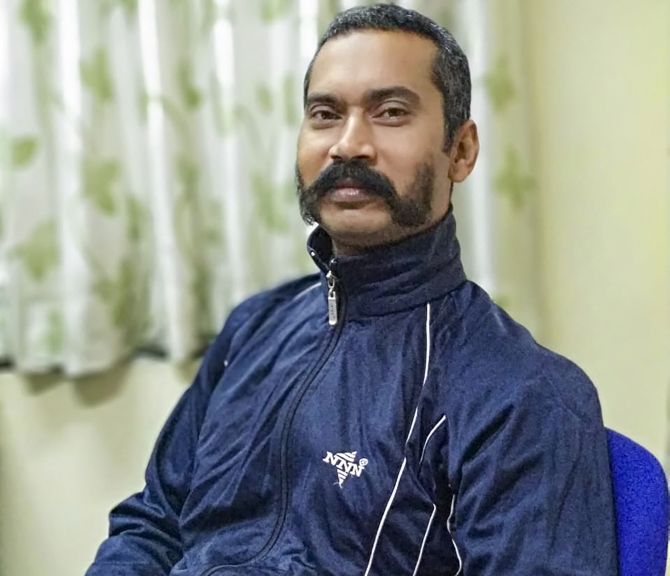 IMAGE: Constable Ratan Lal of Delhi Police who was killed in the clashes. Photograph: PTI Photo

BJP spokesperson Meenakshi Lekhi said the death of a Delhi Police head constable was a 'ploy' to embarrass India during Trump's visit and likened it to the massacre of Sikhs in Chattisinghpura in 2000 during the then US president Bill Clinton's trip to the country.

'Shocked to hear the death of HC Sh Ratanlal in a brutal & barbaric manner. This reminds me of massacre of Sikhs in Chattisinghpura during Clinton's visit.

'Incidents change but anti India forces remain the same. Ploy to embarrass India, Request all to remain calm & maintain peace,' she said in a tweet. 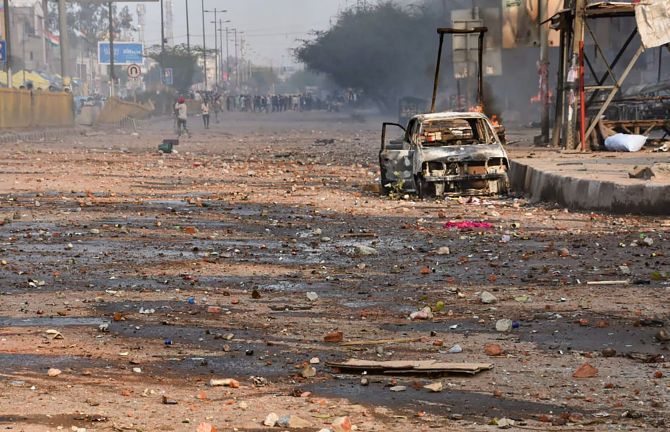 IMAGE: Brick-bats lie on the Khajuri road after the clashes. Photograph: PTI Photo

The Delhi Metro has closed entry and exit at the Jaffrabad, Maujpur-Babarpur, Shiv Vihar, Gokulpuri, Johri Enclave stations as violence prevailed in the area.

The entry and exit of Central Secretariat, Patel Chowk and Udyog Bhawan were shut for nearly an hour. 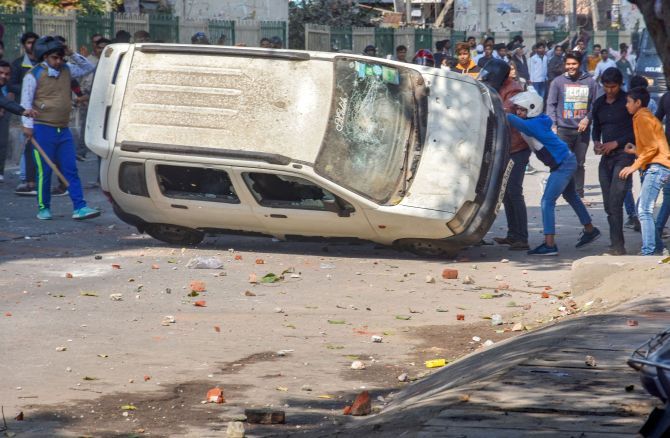 A case has been registered in connection with a protest march against the citizenship law in south Delhi's Hauz Rani a day ago, police said on Monday.

A first information report was registered against the people who participated in the protest, mobilised the crowd and injured 37 police personnel, an officer said.

On Sunday, a group of citizenship law protesters, who were on a sit-in at Gandhi Park in Hauz Rani since the past month, were allegedly baton-charged when they took out a march towards the main road, a claim rejected by the police.

According to the police, no permission was granted for the march and the protesters had tried to block traffic at multiple locations.