Stray incidents of stone pelting were reported from parts of Maharashtra on Friday during the statewide 'bandh' called by Dalit leader Prakash Ambedkar-led Vanchit Bahujan Aghadi against the Citizenship (Amendment) Act and the National Register of Citizens, but normal life remained largely unaffected, officials said. 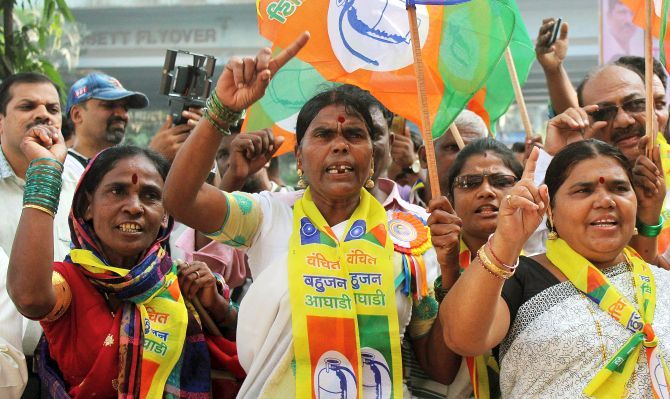 IMAGE: Vanchit Bahujan Aghadi workers shout slogans during the bandh being called against the CAA and NRC in Mumbai. Photograph: ANI Photo

A bus driver was injured in stone pelting in Mumbai.

The Vanchit Bahujan Aghadi called for the statewide shutdown to protest against the CAA, the proposed NRC and also economic issues.

Speaking to reporters as he called off the shutdown at around 4 pm, Ambedkar said the 'bandh' received "good response" from traders and office-goers in Mumbai and it was "peaceful" across the state.

He said some people who engaged in stone pelting or vandalism during the bandh were not attached to the VBA.

Ambedkar alleged that police lathi-charged and detained VBA workers in Vidarbha's Amravati, but later released them after realising that the action was "wrong".

In Palghar adjoining Mumbai, he alleged some Bajrang Dal activists forcibly tried to re-open shops during the shutdown period.

"The protest was held peacefully in rest of the Maharashtra. We were able to convey the message against CAA, NRC and NPR. It is affecting Muslims as well as Hindus...Plus, the country's economy has collapsed, we are on the cusp of bankruptcy. We were able to highlight it," Ambedkar said.

He said around 3,000 VBA workers were detained across the state since Thursday night and added the his party has requested the police to release them as they did not indulge in vandalism.

He also claimed that around 100 political and social organisations apart from labour unions supported the bandh.

Earlier in the day, the driver of a civic-run BEST bus suffered injuries after stones were pelted at the vehicle in Mumbai's eastern suburb of Chembur, an official said.

The incident took place around 9.15 am when some unidentified persons pelted stones at the bus heading towards Kurla station.

Its driver, Vilas Dabhade, was wounded and rushed to Shatabdi Hospital in suburban Govandi.

BEST buses were also pelted with stones in Shanti Baug in Chembur and on JM Mehta road in Malabar hill in south Mumbai.

A Maharashtra State Road Transport Corporation official said it cancelled 1,441 services till 6pm, with Nanded leading with 554 out of its 1,409 services off the roads.

An MSRTC bus was pelted with stones in Paithan in Aurangabad and another got hit in Kandar in Nanded.

Suburban and outstation trains on both the Central and Western Railways, Metro, monorail services, taxis and auto-rickshaws were plying normally in the financial capital.

In Ghatkopar, a mob assembled near Sant Tukaram Bridge and tried to enforce a road blockade in the morning, after which 36 people were arrested.

Another six people were held under provisions of the Mumbai Police Act and IPC when they tried to block the Eastern Express Highway at Kamraj Nagar, an official said. All 42 people arrested in the metropolis were later released on bail.

In Aurangabad city, a bus of the local municipal corporation was pelted with stones by unidentified persons in the morning, but no injuries were reported, officials said.

The bandh was peaceful in other parts of Marathwada region, they said.

The bandh received a lukewarm response in Pune and Ahmednagar districts, where public transport remained largely unaffected, while commercial establishments and schools were open.

A group of 20 to 24 people tried to block a road near Dandekar Bridge on Sinhagad Road in Pune, but were soon dispersed, officials said.

In another incident in Pune, a group of people stopped four to five civic buses on Dandekar Bridge but were quickly scattered, said Anant Waghmare, head of the traffic department at Pune Mahanagar Parivahan Mahamandal Ltd.

"All our operations are going on smoothly and there is no report of any untoward incident," he added.