Entire districts without electricity and untold damage is what is left behind after Cyclone Fani, known as the worst storm to hit the state, barrelled through on May 3.

Take a look at how the state is now picking up the pieces after the storm and inching towards reconstruction. 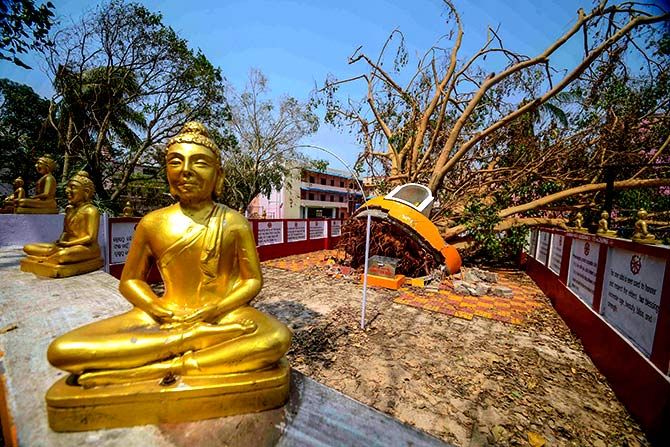 A tree at Budh Vihar that lies uprooted in the aftermath of cyclone Fani, in Bhubaneswar. The Odisha government estimated a tentative loss of Rs 12,000 crore due to cyclone Fani. Photograph: PTI Photo 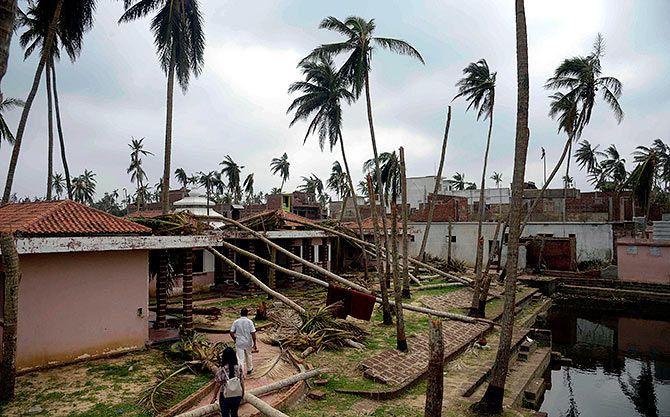 A damaged home and uprooted trees in the aftermath of cyclone 'Fani', at Amphi Theatre, Raghurajpur village, in Puri. Cyclone Fani killed at least 64 people and damaged more than 5 lakh dwelling units in the state's coastal districts. According to a state government report, while the loss to public properties was to the tune of Rs 5,175 crore, expenditure towards relief and response stands at Rs 6,767.56 crore. Photograph: PTI Photo 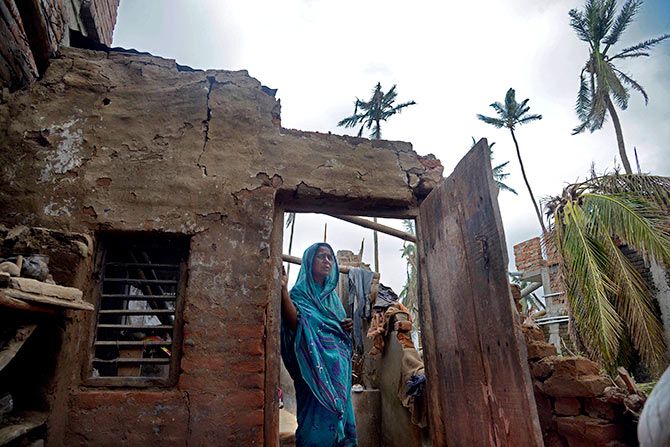 A woman stands in the remnants of her home at the heritage crafts village Raghurajpur, in Puri district. Raghurajpur, home of Odisha's famous Pattachitra art, is a village ruined, priceless pieces of art washed away by the cyclone. The crafts village, about 15 km from the coastal town of Puri, is also called ‘Mini Odisha' and is a major tourist attraction. It is home to around 700 people of 140 families, each of which has an artist, many of them award winners. Photograph: PTI Photo 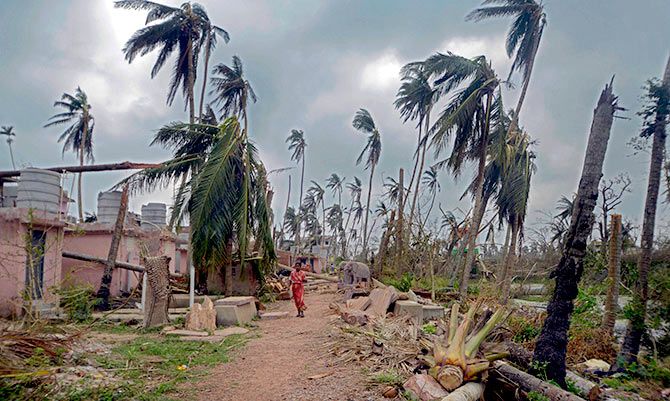 A woman walks past the damaged structure and uprooted trees in Puri district. Residents of villages complain that after the storm there's no light, no connectivity and no water. Photograph: PTI Photo 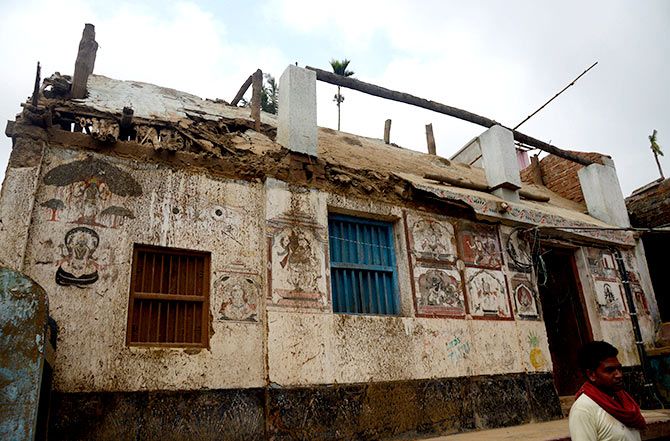 A man stands near a house of a 'Pattachitra' artist, damaged in the aftermath of cyclone 'Fani. The hands, which used to create the magic called Pattachitra -- patta (canvas) and chitra (painting) - are now occupied in clearing the debris. “This place was like a dream before the storm with one generation handing over the art and heritage to next but now there is deep silence. We use natural colours, palm leaves, coconut and a special kind of gum but there are no trees left,” said National Award winner Gangadhar Maharana. Photograph: PTI Photo 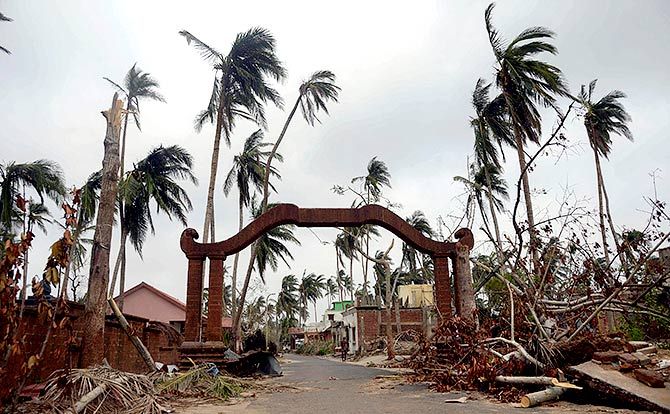 Damaged structure and uprooted trees are seen in the aftermath of cyclone 'Fani', at Amphi Theatre, Raghurajpur village, in Puri. The state government has estimated the highest loss in the power sector at Rs 1,160 crore, while the loss in the panchayati raj and the drinking water department stands at Rs 587 crore. Photograph: PTI Photo 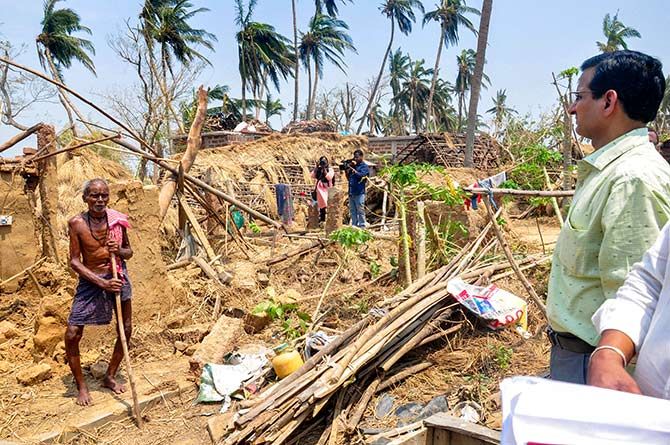 Central Team interacting with cyclone victims during their visit to Arakhakuda and Mirzapur village, at Khordha district of Odisha. Entire Puri district and hundreds of villages in other districts have been without electricity 12 days after the cyclone 'Fani' devastated coastal Odisha. Photograph: PTI Photo 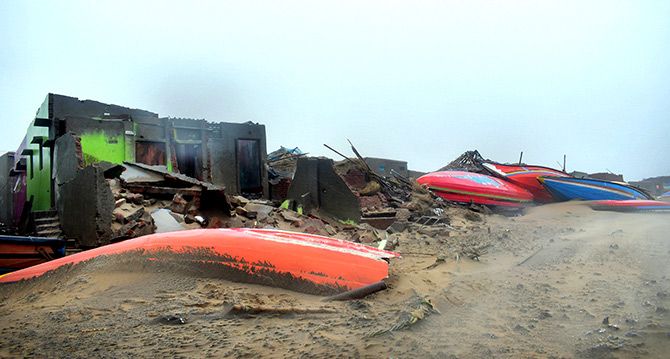 A view of damaged houses in the aftermath of Cyclone Fani, at Penthakata village of Puri district. Puri district bore the maximum brunt of the cyclone. Photograph: PTI Photo 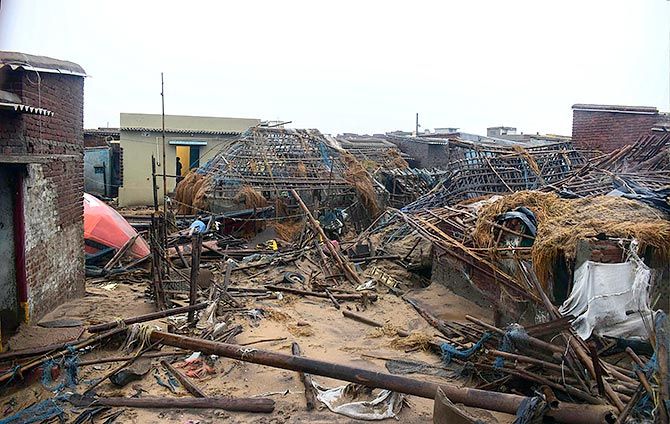 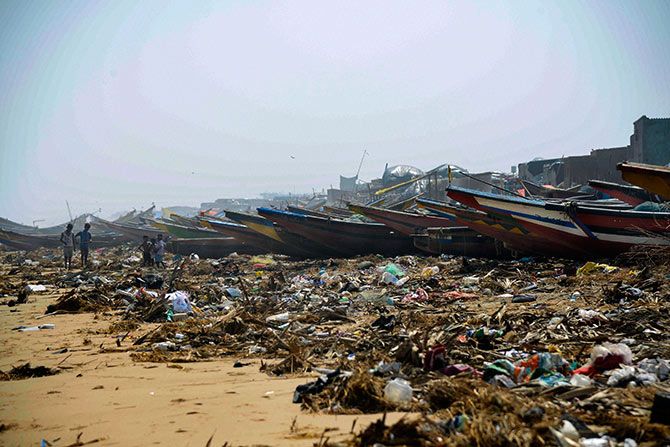 Debris scattered along the coastline in the aftermath of Cyclone Fani, at Penthakata village of Puri district. Photograph: PTI Photo
SHARE THIS STORY
Print this article 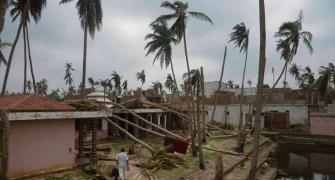 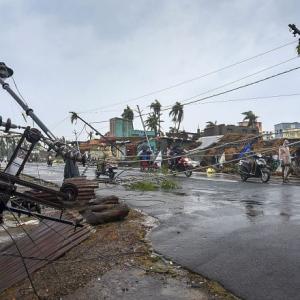