A passed out guest on the floor to kids pulling funny faces at the perfectly wrong moments are not what we associate with wedding photography.

But that's the magic of Ian Weldon's photography which captures the real character of the big day.

Discussing the amusing moments he's caught on camera, Ian Weldon, from Newcastle, said: 'I am not a wedding photographer. Instead, I prefer to call myself a photographer that photographs weddings'.

With his debut exhibition taking place at the Martin Parr Foundation at the end of the month -- coinciding with the launch of a new book co-published by the foundation and RRB PhotoBooks -- Ian’s new series, simultaneously titled I am Not A Wedding Photographer, is by no doubt set to shine some light on the traditional genre.

With his kind permission, here are some of the hilarious images. 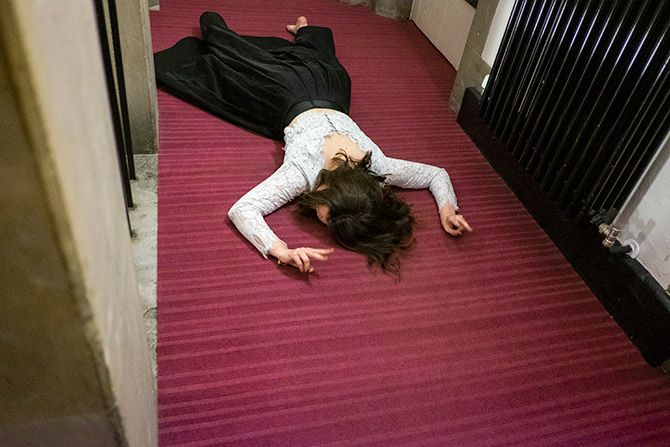 Floored! This wedding guest is finally at peace on the floor after heavy drinking on the big day. Weldon's pieces cut through the clichés of the big day. A photographer for 15 years, he says he tries to bring out the chaos and the drama that goes along with someone's wedding. 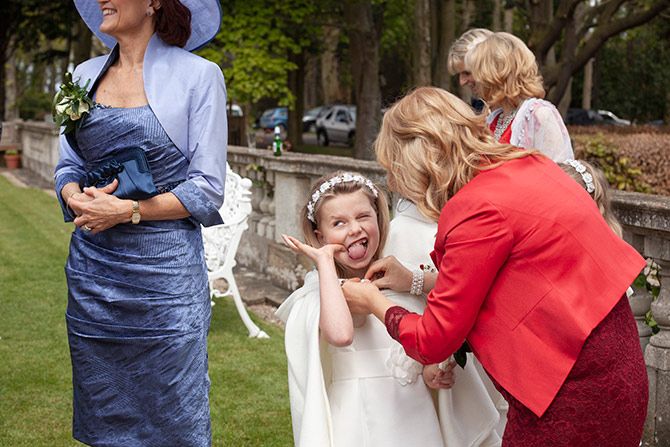 Say cheese! This sweet bridesmaid decided to stick her tongue out and make this image funny and warm. "I think that understanding the ideas of photography and trying to apply that to a genre that is so entrenched in tradition and popular aesthetic helped me to forge a path," says Weldon about his style of photography. 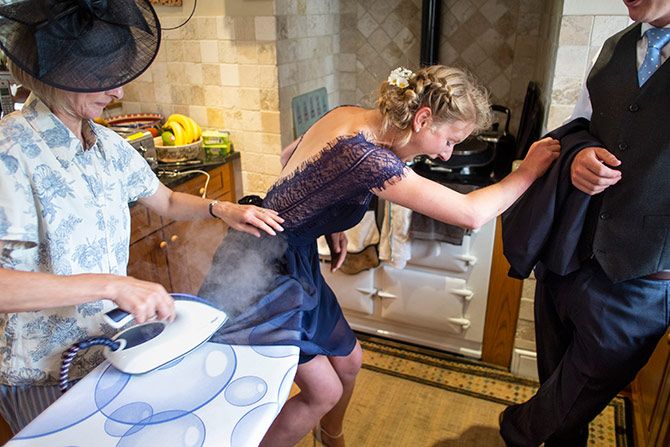 Hot off the presses: With no time to spare, this bridesmaid had her dress ironed while she was still wearing it. Speaking of his clients, he says, "Almost all of the couples said that they didn’t want a wedding photographer at their wedding. No matter the budget, all were only interested in having the reality of the day photographed." 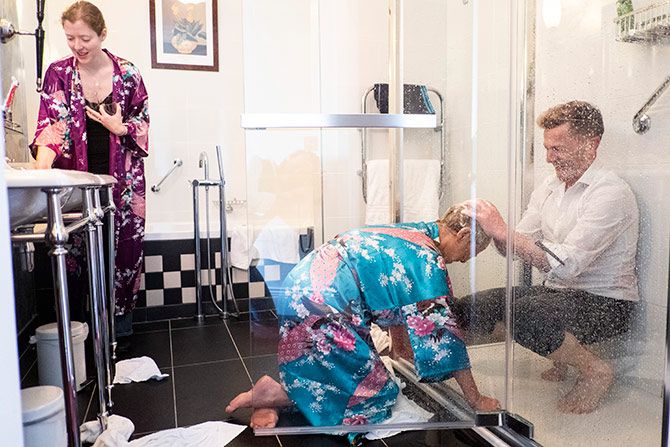 Letting your hair down! One hairdresser in his attempt to give his bride the perfect hair do, decided to get into the shower and do things himself. Weldon says that all photographs are as important as any other photograph. Everything in that situation will mean something to that couple on the day. 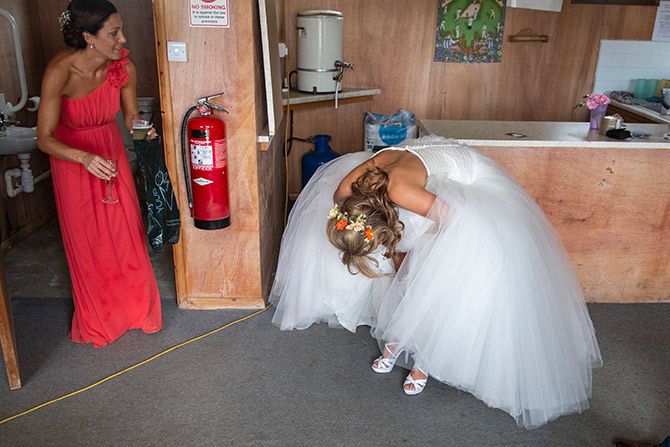 Dress stress! This bride seems to struggle in what she may have thought as her 'perfect dress'. Sometimes things don't turn out the way we thought they would... 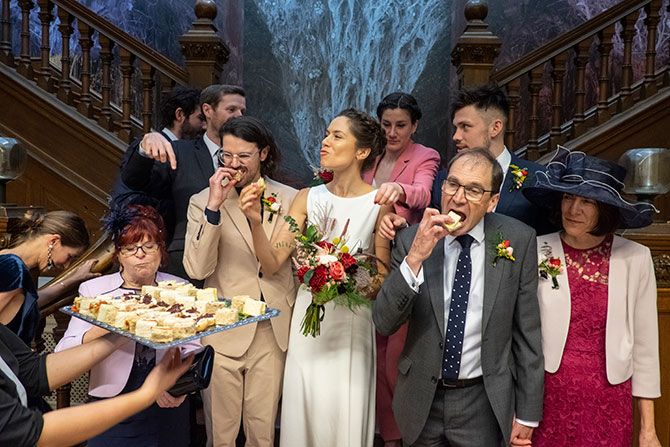 Hot cakes! Here, Weldon was getting ready to take a traditional group portrait. The group had been on their feet all day and had not had a chance to eat anything. So when a waiter walked past with a tray of canapes, they went for it. ‘It’s what I am trying to do with all my photographs,’ says Weldon. ‘It’s that serious situation that is juxtaposed with a ridiculous aspect. 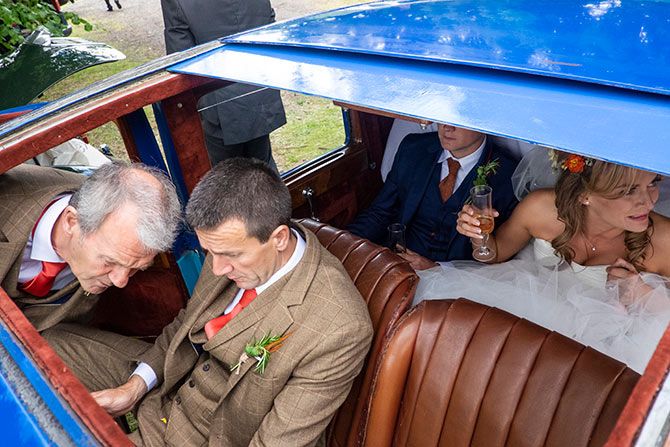 On a high ride! It may be the day that most couples spend thousands on, but no amount of money is a guarantee it'll all run smoothly - as this bride found out when the car wouldn't start. 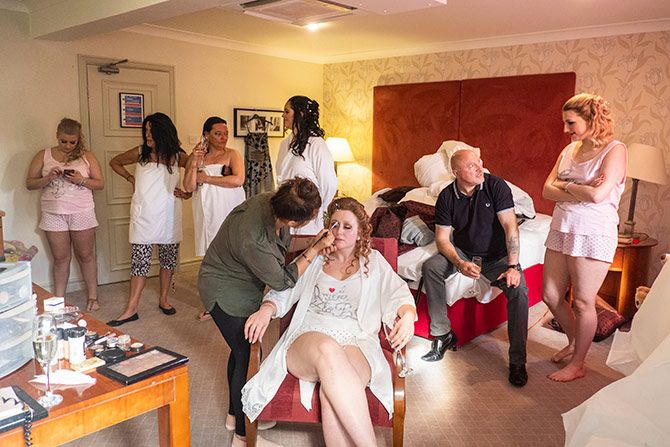 She's got the look! As this bride-to-be gets ready, her bridal party simply hover in the background not knowing what to do. 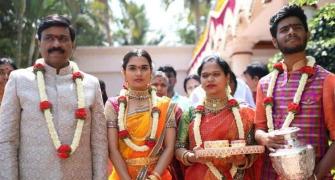 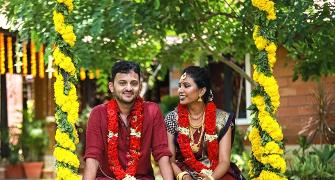 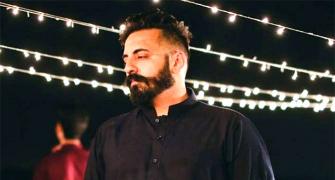 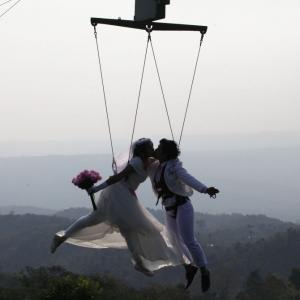