Coronavirus cases in the country crossed 600 on Wednesday as authorities beefed up preparedness to fight the pandemic with the Army ordnance factories and central paramilitary forces earmarking over 2,000 beds in their chain of hospitals for isolation and treatment of people affected by COVID-19. 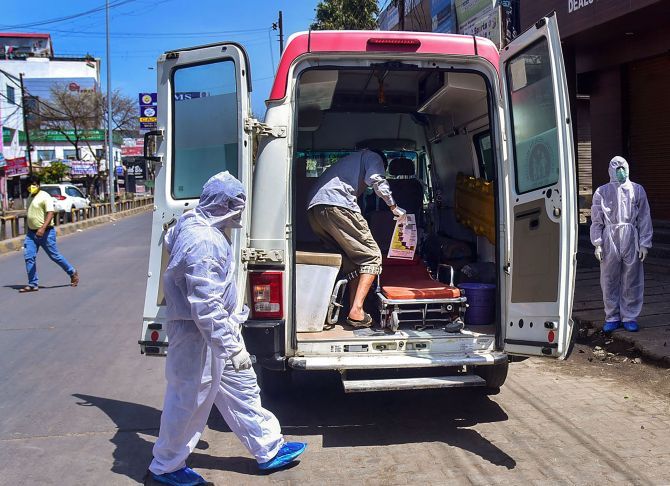 IMAGE: Medical workers escort a suspected coronavirus patient to get in an ambulance as he is shifted to a hospital for treatment during nation-wide lockdown, in Aligarh, on Wednesday. Photograph: PTI Photo

In addition, the Hamirpur district administration in Himachal Pradesh took over all the ten hostels with 2,000 rooms of the National Institute of Technology (NIT) for creating an isolation centre, an official said in Shimla.

A 2,200-bed state-run hospital in Kolkata has stopped admitting new patients who are suffering from other diseases and was discharging patients whose condition had improved as part of efforts to create a dedicated isolation centre, another official said in Kolkata. IMAGE: Homeless people sit along a road as they shift to a safer place, during lockdown in the wake of coronavirus pandemic, in Prayagraj, on Wednesday. Photograph: PTI Photo

Addressing people of his constituency in Varanasi via a video link, Prime Minister Narendra Modi reiterated that social distancing and staying indoors were the only way out and the best option to deal with coronavirus.

"Around one lakh people infected with coronavirus are recovering, this also needs to be highlighted," he said.

"People should focus on how deadly this virus is. This disease doesn't discriminate between rich and poor," the prime minister said, a day after he announced a 21-day nationwide lockdown to try halt the spread of the coronavirus. The lockdown came into effect from midnight. Underscoring the enormity of the health challenge before the country , he invoked the Mahabharata, and said the epic war was won in 18 days and his government's effort is to win this war against coronavirus in 21 days.

"The war of Mahabharata was won in 18 days and our effort is to win this war against the coronavirus in 21 days.”

The number of coronavirus cases on Wednesday touched 606 of which 43 were cured or discharged, a union health ministry official said, adding the death toll stood at 10. IMAGE: Police distributes food to poor people during lockdown, in the view of coronavirus pandemic, in Patiala, on Wednesday. Photograph: PTI Photo

The all India tally, however, did not take into account one death each reported on Wednesday by state officials in Tamil Nadu and Madhya Pradesh.

The deaths were the first casualties from the viral infection for the two states.

A 65-year-old woman succumbed to coronavirus at a government hospital in Indore becoming the first case of COVID-19 death in Madhya Pradesh, officials said.

The woman, who had no history of travelling abroad in recent times, originally hailed from neighbouring Ujjain and was undergoing treatment at the government-run M Y Hospital in Indore. A 54-year-old man infected with the coronavirus died at a hospital in Madurai in the early hours of Wednesday, Tamil Nadu's first recorded death due to the disease, state Health Minister C Vijayabaskar said.

The man had a medical history of prolonged illness with uncontrolled diabetes, he added.

The health ministry also clarified that the second reconfirmatory test of a Delhi patient who died on Tuesday, came negative.

Therefore, the death was not included in the updated toll, it said. The death was shown against coronavirus in Tuesday's tally. IMAGE: Police punish offenders for flouting the lockdown guidelines, on the first day of the 21-day nationwide lockdown, in Amritsar, on Wednesday. Photograph: PTI Photo

The number of deaths around the world from the novel coronavirus cases is stated to have crossed 19,000 and more than 427,940 declared cases were reported to have been registered in 181 countries and territories since the epidemic first emerged in China in December.

Authorities were augmenting the preparedness to deal with the pandemic at a time when an international team of scientists projected that India could face over one lakh confirmed cases of coronavirus by mid-May if the current trend in spike continues. In a heart warming gesture, a Pune-based couple, the first COVID-19 patients in Maharashtra, received an emotional welcome from the members of their housing society when they reached their homes on Wednesday afternoon after being discharged from a hospital following recovery.

Residents of the housing society, located on Sinhgad Road in Pune, came out in their balconies and clapped and clanged their utensils to greet the 51-year-old man and his 43-year-old wife.

A chain of 32 paramilitary force hospitals across the country, with a total capacity of about 1,900 beds, has been taken over by the government for isolation and treatment of COVID-19 affected patients, officials said in Delhi. The 'urgent' decision to use the 'composite hospitals' of these forces, also called as the Central Armed Police Forces (CAPFs), was taken after a high-level meeting of the Union home ministry that was chaired by the secretary of border management.

The total capacity of these 32 earmarked hospitals is 1,890 beds, a senior official said. IMAGE: Stranded passengers wait in a queue maintaining social distancing at SRTC bus terminal during a 21-day lockdown, imposed in the wake of coronavirus pandemic, in Jammu, on Wednesday. Photograph: PTI Photo

It has also been directed that arrangements should be made so that people already admitted here, troops of these forces or their family members, could be shifted to another location in case of an increase in the number of coronavirus-affected people.

The Ordnance Factory Board (OFB) has designated a total of 285 beds for isolation wards to handle the coronavirus cases, the Defence Ministry said. IMAGE: People purchase vegetables on the first day of the 21-day nationwide lockdown, imposed to contain the spread of coronavirus, in Bhopal, on Wednesday. Photograph: PTI Photo

The West Bengal government has started discharging patients from a state-run hospital and stopped admitting new ones to the institute to convert the entire facility into an isolation and treatment centre for people suspected to be infected with coronavirus, a senior health official said in Kolkata.

Full fledged operations at Medical College Hospital, Kolkata as a dedicated facility for isolation and treatment of suspected coronavirus patients will begin from Saturday, he said.

"From Tuesday, we have started discharging patients who are in better condition and also stopped admitting new patients, especially those who are pregnant and are referring them to other hospitals.

"This is as per the state government's plan to convert the entire hospital, which has 2,200 beds, into an isolation and treatment centre for persons suspected to be infected with the coronavirus," the official said.