Kumaraswamy had proved right the adage that politics is the art of the possible, but the science graduate failed to get his chemistry right in keeping the coalition legislators together to ensure his government's longevity. 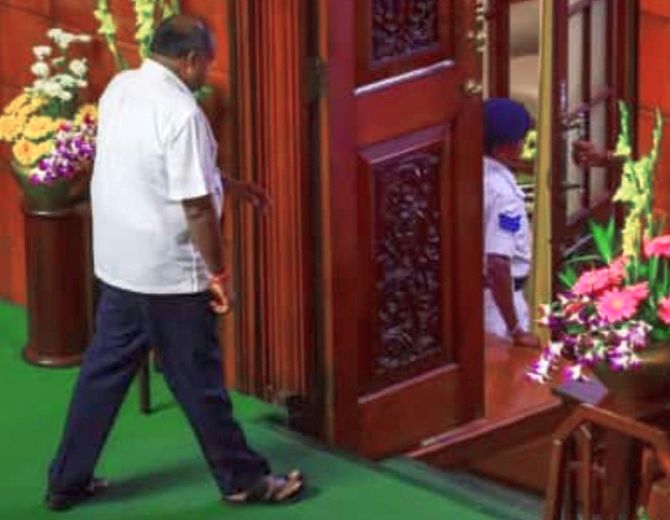 "I will be the king and not the kingmaker," H D Kumaraswamy had said in the run-up to the Karnataka assembly polls in 2018.

His words turned prophetic as the 59-year old Vokkaliga leader occupied the coveted post on May 23,2018 despite his Janat Dal-Secular finishing a poor third in the polls.

But, like his last stint, his tenure as chief minister was short-lived as the wobbly coalition government that he headed finally collapsed after over 13 months in power.

Kumaraswamy lost the trust vote on Tuesday in an unending battle of nerves played out in the state assembly over four days during the debate on the confidence vote moved by him.

His coalition government was pushed to the brink with 16 MLAs,13 from the Congress and three from JDS, resigning, while independent MLAs R Shankar and H Nagesh withdrew support.

One Congress member Ramalinga Reddy subsequently retracted from his decision to resign, saying he would support the government but then it was all in vain.

Kumaraswamy's second term as chief minister was a hard one, with coalition worries and disgruntlement within, repeatedly threatening the longevity of his government.

Managing the coalition contradictions and ensuring the stability of the government became a daily exercise to an extent that Kumaraswamy called himself a "child of circumstances."

Reflecting the strains in the coalition, he had even said he was "not happy" in the top post and was swallowing the pain like Vishakantha (Lord Shiva), who drank poison.

On the margins of Karnataka politics for a decade, Kumaraswamy, the third son of JD-S supremo and former prime minister H D Deve Gowda, was widely tipped to play a supporting role in government formation.

Nobody had even reckoned him landing the chief minister's chair.

As the counting of votes progressed on May 15, 2018, and it became clear that there would be no straight winner in the three-horse race for power, fate smiled on Kumaraswamy.

A battered Congress moved in swiftly and declared its unconditional support to the JD-S to form the government, despite the party having only 37 MLAs, less than half the Congress' strength of 78 then.

Seizing the opportunity, Kumaraswamy staked claim to form the government.

Governor Vajubhai Vala, however, swore in BJP's B S Yeddyurappa to form the government as the leader of the single largest party in the 225-member assembly.

Vala's decision could only delay Kumaraswamy's ascension to Karnataka's throne, as Yeddyurappa, facing an imminent defeat during the trust vote, resigned within three days of being sworn in.

Though Kumaraswamy managed to be back as CM, managing the contradictions in the coalition was not smooth sailing for him after the JD-S and Congress fought a bitter electoral battle in the state, particularly in the old Mysuru region.

Kumaraswamy, who knew clearly that running the coalition government would be a "big challenge" for him, made every attempt to carry forward the administration steadily, amid repeated rumblings within.

But the rout for the coalition in the Lok Sabha polls, exactly one year after his government came to power, came as a virtual death blow to his wobbly rule.

Both the Congress and the JD-S managed to forge an alliance for the 2019 Lok Sabha polls, but it was not something grassroot level workers of both parties were happy with, especially in old Mysuru region, where they are arch rivals.

The reality became evident leading to the defeat of Deve Gowda in Tumkur and Kumaraswamy's son Nikhil Kumaraswamy in Mandya.

It had been a turbulent one year for the Kumaraswamy-led government as coalition worries, dissidence in alliance partner Congress and a strong BJP with 105 MLAs allegedly trying to poach MLAs of the ruling combine repeatedly aiming to destabilise the government, marred its smooth functioning.

Repeated demand from ministers in his own cabinet for Congress Legislature Party leader Siddaramaiah to become chief minister, and they openly expressing displeasure against his functioning had affected Kumaraswamy's morale to a great extent, following which he had even offered to quit.

Though in this short span Kumaraswamy pushed for populist measures like farm loan waiver, it came under attack for alleged lack of clarity about the number of farmers it would benefit and total outgo.

Also his 'Grama Vastavya' (village stay) programme was dubbed as "political drama" as it came under criticism for lack of direction and spending, while the state was reeling under drought.

Kumaraswamy was also under intense criticism for allegedly functioning from a luxury hotel leading to inaccessibility, and troubled relationship with the media.

Seen as an "accidental politician", Kumaraswamy's first love was films.

A fan of Kannada thespian, Rajkumar, he was attracted to cinema since his college days.

He took up film-making and distribution, and produced several successful Kannada films, including "Jaguar", starring his son Nikhil.

Kumaraswamy, who grew up in a political environment, entered electoral politics by contesting the Kanakapura Lok Sabha seat in 1996 and won.

He subsequently lost both the parliamentary and assembly elections.

He got elected to the assembly for the first time in 2004, when the JD-S joined the coalition government led by Congress' Dharm Singh after the polls threw up a hung House.

In 2006, he rebelled and walked out of the coalition with 42 MLAs against the wish of his father, citing threat to the party, and formed the government with the BJP, becoming the chief minister during his very first term as MLA.

Under a rotational chief ministership arrangement, he helmed the state for 20 months.

When the BJP's turn for chief ministership came, he reneged on the arrangement, and brought down the Yeddyurappa government within seven days.

In the election that followed in 2008, the BJP formed its government in Karnataka, its first to the south of the Vindhyas under the leadership of Yeddyurappa.

Kumaraswamy had proved right the adage that politics is the art of the possible, but the science graduate failed to get his chemistry right in keeping the coalition legislators together to ensure his government's longevity. 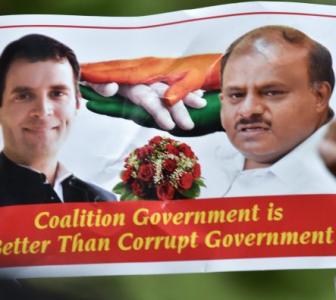 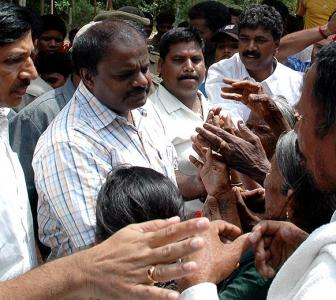