'The message they want to send to the country is that they can do anything by hook or crook.' 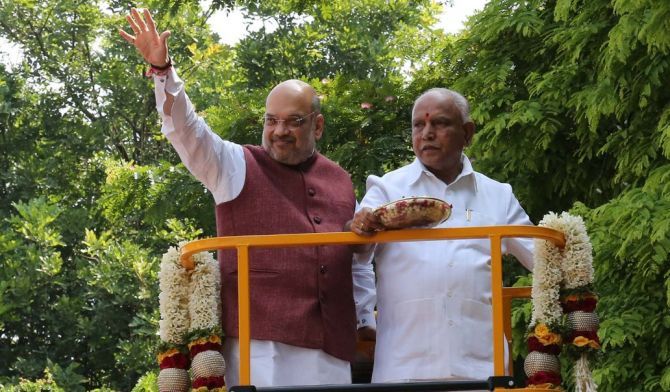 Amid political turmoil triggered by charges of horse-trading flung at each other by the ruling coalition and the Bharatiya Janata Party, H Nagesh (Independent) and R Shankar (Karnataka Pragnyavantha Janatha Party) wrote to Governor Vajubhai Vala, conveying their decision to withdraw support with immediate effect.

In the 224-member Karnataka assembly, the BJP has 104 members, the Congress-79, the JD-S 37, the Bahujan Samaj Party, the KPJP and Independent one each, besides the speaker.

In 2018, the Congress and JD-S formed a coalition government in the southern state after BJP leader Bookanakere Siddalingappa Yeddyurappa, who was sworn in as chief minister, resigned ahead of taking a floor test to prove his government's majority in the same month.

The two Independent MLAs's withdrawal of support brings down the numbers of the ruling alliance from 120 to 118 -- the halfway mark stands at 113.

Meanwhile, the BJP has shifted all its 104 MLAs to an expensive resort in Haryana's Nuh district.

"We have 118 MLAs, so where is the BJP going to get its majority from?" JD-S General Secretary Danish Ali asks Rediff.com's Syed Firdaus Ashraf.

Is your government stable? What is the political crisis in Karnataka?

There is no crisis.

The government is stable.

The BJP from day one wanted this government to fall.

They know that the Karnataka government is a symbol of Opposition unity.

This move (poaching MLAs) by them (the BJP) has come soon after the SP-BSP (Samajwadi Party and Bahujan Samaj Party) alliance in UP.

The message they want to send to the country is that they can do anything by hook or crook.

Will your government complete its full term?

Yes, we are confident of our majority.

We have 118 MLAs even after the Independent MLAs have quit.

So where is the BJP going to get a majority from, I fail to understand.

The BJP claims some Congress MLAs are ready to switch sides.

If that is the case, why is the BJP holding its Karnataka MLAs in a Gurugram resort?

The same BJP was criticising the Congress during the Rajya Sabha elections in Gujarat.

Why is the BJP keeping its MLAs in lock-up?

They are not confident about their MLAs.

Horse-trading is in the BJP's DNA.

They did that earlier, during Yeddyurappa's time, which was called Operation Kamla.

It looks like your government is in danger of collapse.

Our government is stable and will complete its full term.

What about the Congress MLAs who are said to be camping in Mumbai with 'BJP leaders'?

There are three MLAs and they have not said anything so far.

They have not said they are withdrawing support to our government or resigning.

Is Congress leader D K Shivakumar going to Mumbai to meet those MLAs?

There are reports that these Congress MLAs are being threatened by central agencies.

That is why those MLAs are there (in Mumbai). They have got an enforcement directorate inquiry.

In such a situation, how do you run the government?

In a coalition, these things happen.

It is not difficult to run the government as it is stable and will continue to work smoothly.

Your government is just seven months old and you are facing this crisis. Is it possible to run a coalition government in Karnataka or in the country?

We have seen earlier how mili juli sarkars have completed their terms.

Coalition politics came to India in 1990s and this is a reality of Indian politics.

In the initial stages, there were some instability, but after 2000 onwards, coalitions are a reality of Indian politics.

The government will be strong only if they are working for common people, for their welfare and not in the interest of crony capitalists.