India needs to be prepared for 'two-front threat': Army chief

Army chief General M M Naravane on Tuesday hoped for an amicable resolution of the military standoff with China in Ladakh through talks based on 'mutual and equal security' even as he said India will have to be prepared to deal with a 'two-front' threat scenario due to the potent and collusive threat from China and Pakistan. 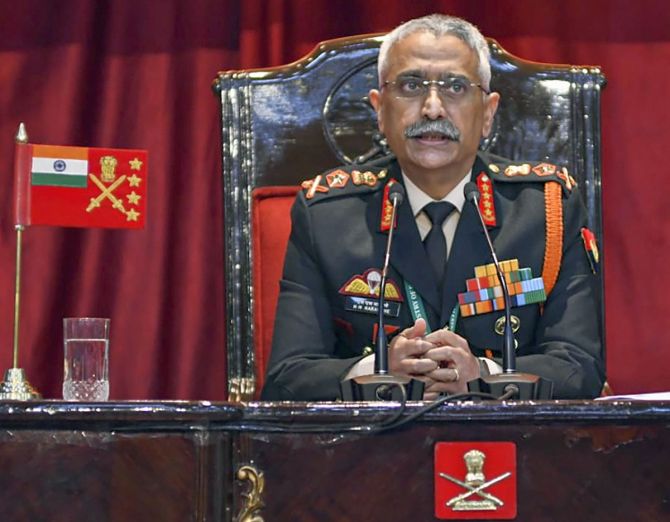 Gen Naravane at the same time asserted that Indian troops are fully prepared to deal with any eventuality along the Line of Actual Control (LAC) and will hold their ground as long as it takes to achieve the 'national goals and objectives'.

The Chief of Army Staff was addressing a news conference in New Delhi ahead of the Army Day on January 15.

He said through the medium of talks with China, India is trying to reach a solution that is 'acceptable and not detrimental' to the national interests, adding 'if the talks get prolonged, so be it'.

On increasing security challenges at the LAC, he said a need was felt about 'rebalancing' of troops along the northern borders and subsequently steps have been taken to put adequate focus on the borders with China.

"I am sure that through dialogue and discussion, we will be able to reach an amicable solution based on the principle of mutual and equal security and in consonance with the talks...I am very hopeful for a positive situation.

"But as I said, we are ready to meet any eventuality," he said.

"We are prepared to hold our ground as long as it takes to achieve our national goals and objectives," he said, adding the Indian troops are maintaining a high level of alertness all along the LAC and not just in Ladakh.

"Our operational preparedness is of a very high order and the morale of the troops is high. Whatever has transpired in the last year has highlighted the need for us to restructure and for us to enhance our capability."

Asked about the actual situation in eastern Ladakh, Gen Naravane said it remains the same that was prevailing last year, and there has been no change in status quo.

To another question on the same issue, he said the situation remains the same whatever existed earlier.

India and China are locked in a military standoff in eastern Ladakh since May 5 last year.

Referring to the overall security challenges facing India, he said Pakistan and China together form a potent threat to national security.

"There is no doubt that Pakistan and China together form a very potent threat and there is an aspect of collusivity which cannot be wished away.

"That is also very much part of our strategic planning and calculus when we are formulating our plans," he said.

"There is no doubt that a collusive threat exists. This is not just something which was part of some strategy paper or loud thought process.

"It is very much manifesting on the ground."

Gen Naravane said there has been an increasing cooperation between China and Pakistan in both military and non-military sectors and the possibility of a two-front threat is something India should be prepared for.

"There is indeed increased cooperation between China and Pakistan in both military and non-military fields. And a two-front threat is very much something that we have to be prepared to deal with and in dealing with such a threat, we will have to see which is the more serious threat and prioritise and deal with that first," he said.

When queried about China's mobilisation of troops in May last year, the Army chief said it was not new as they came to the region for training and India was monitoring them.

However, he added the Chinese Army had the 'first mover advantage'.

"We had the first mover advantage in August as they did not know we would surprise them," he said, in an apparent reference to the Indian Army capturing a number of strategic heights along the Pangong lake in August last year.

Gen Naravane also said China has withdrawn some troops from depth areas on conclusion of training and noted there is no reduction in deployment of personnel at the frontline.

"However there is no decrease in strength either on their side or on our side as far as friction points are concerned."

The Army chief said one should not read too much into either the presence of Chinese troops in training facilities or their absence.

"These areas are well in depth as much as anything from 500 km to 1,500 km away from the borders. We keep an eye on them because these are the forces which could be mobilised and reach the borders in 24 to 46 hours.

"We need not lay too much significance on these comings and goings," he said.

"What is more important is the border areas where the eyeball-to-eyeball confrontation is there and the various friction areas which are there. There is no reduction of troops in these areas," he said.

On Pakistan, Gen Naravane said the country continues to use terrorism as an instrument of state policy and India will continue to confront the menace effectively.

"Pakistan continues to embrace terrorism as an instrument of state policy. However, we are very clear that we have zero-tolerance for terror and we reserve our right to respond at a time and place of our own choosing and with precision. This is a clear message that we have sent across," he added.

Gen Naravane said what has clearly emerged in the last one year is the need for India to restructure, and to enhance its capabilities.

He said the Army is carrying out restructuring with an aim to transform it from manpower-driven force to technology-intensive force, adding it is looking at application of high-end technologies like big data, artificial intelligence and quantum computing.

"We are fully committed to tri service jointness and the evolution of various Integrated Command and we will work with the other services to make sure that this happens in a very calibrated and smooth manner."

Asked about the financial resources of the Army, Gen Naravane said he expects that the force will be given its requirements in the Union Budget.

"We have been assured that considering the situation, if there is additional requirement, they will be fulfilled," he said. 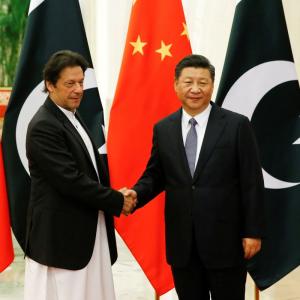