Odisha gears up for Cyclone 'Bulbul' With Cyclone 'Bulbul' set to intensify into a severe cyclonic storm soon and trigger heavy rain in Odisha, the state government on Thursday issued a revised advisory asking the districts to brace up for possible flood-like situation and waterlogging.

Though cyclone 'Bulbul' over Bay of Bengal is set to move towards Bangladesh and West Bengal coasts, skirting Odisha, it will unleash heavy to very heavy rain in over 10 coastal and northern districts in the state for at least three days from on Friday, a senior official said.

Earlier, the IMD had predicted light to moderate rainfall accompanied by wind with 40 to 50 kmph in north coastal Odisha under its impact, he said.

Jena said the Prime Minister's office reviewed the situation through video-conference on Thursday.

In view of rough weather, all schools and Anganwadis will remain closed on Friday and Saturday in Puri, Jagatsinghpur and Kendrapara districts, an official said.

Cyclone Bulbul, moving at a speed of 15 kmph, is now centred over east-central Bay of Bengal, about 560 km south-southeast of Paradip in Odisha and 680 km south-
southeast of Sagar Islands in West Bengal, said the Director of Bhubaneswar Meteorological Centre, HR Biswas.

It is likely to intensify into a severe cyclonic storm during next 24 hours, move initially north-northwestwards for next 12 hours and then towards northwards till Saturday morning.

Thereafter, it is likely to re-curve northeastwards towards Bangladesh and adjoining West Bengal, he said.

With the IMD modifying its predictions, Odisha government on Thursday asked the district collectors, mainly in coastal and northern region, to be prepared to deal with any situation as the cyclone may trigger heavy to very heavy rainfall in several areas, the SRC said.

While evacuation of people from vulnerable areas may be undertaken wherever necessary, around 15 of the state's 30 districts have been asked to remain prepared to deal with any possible waterlogging and flood-like situation.

The SRC said around 15 districts, including Puri, Jagatsinghpur, Kendrapara, Bhadrak, Balasore, Cuttack, Jajpur and Mayurbhanj, have been asked to keep their administrative machinery 'fully prepared' to tackle any contingency.

Odisha Disaster Rapid Action Force (ODRAF) and NDRF have also been requested to send their teams to districts to assist the administration in dealing with the calamity, he said.

Officials have been told to ensure total suspension of fishing operations from Friday.

No fisherman should venture into the sea from Friday till further notice and those inside sea must return immediately, he said.

Farmers have also been advised to take steps to protect crops and harvested paddy.

Jena said the cyclone is expected to cause damage to thatched houses, huts, embankments and salt pans, while unattached metal sheets may fly.

It may cause partial damage to power and communication lines, major damage to Kutcha (non-metallic) and some damage to Pucca (metallic) roads, he said adding flooding of escape routes may also occur.

There may be breaking of tree branches, uprooting of trees due to the cyclone which is likely to cause major damage to coastal crops, the SRC said adding people in the affected areas should remain indoor.

Under the impact of the cyclone, heavy rainfall is likely to take place in Puri, Jagatsinghpur, Kendrapara and Bhadrak districts on Friday and Saturday.

IMD has issued 'yellow warning' (be aware) for these districts during the period.

Similarly, it issued 'orange warning' (be prepared) for Balasore,Bhadrak, Kendrapara and Jagatsinghpur districts on Saturday and Sunday when heavy to very heavy rainfall may pound these areas.

Heavy rainfall will also lash some places in Cuttack,Jajpur and Mayurbhanj districts on Sunday, it said.

Gale wind with 70-80 kmph speed and gusting to 90 kmph is likely to prevail over Jagatsinghpur, Balasore and Bhadrak districts on Saturday, the MeT centre said.

However, the prediction of the cyclone likely to skip Odisha has come as a major relief to the people of the state, who are struggling to return to normalcy post cyclone Fani in May.

According to official reports, more than 64 people lost lives in cyclone Fani and over five lakh houses were destroyed under its impact.

A fortnight ago, six people were killed in Odisha in rain-related incidents. 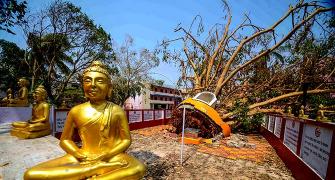