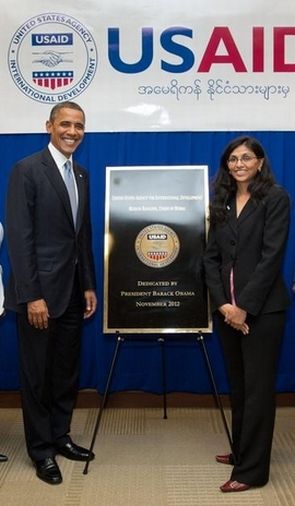 Biswal will succeed the current point man for the region, Robert Blake.

Rediff.com had exclusively reported this development nearly two months ago.

Blake, as reported exclusively by rediff.com, is expected to be nominated shortly by Obama as the new US ambassador to Indonesia.

In nominating Biswal and several other individuals to the departments of state, energy, and defence, Obama said, “It gives me great confidence that such dedicated and capable individuals have agreed to join this administration to serve the American people. I look forward to working with them in the months and years to come”.

Biswal is currently assistant administrator for Asia at the US Agency for International Development -- which is headed by Dr Rajiv Shah, the highest ranking Indian American in the Obama administration -- a position she has held since September 2010.

At the time rediff.com reported exclusively that Biswal would be the next point person for South Asia, sources said that Biswal, during Obama’s recent trip to Myanmar, along with Shah, had been at the President’s side and had provided Obama with comprehensive briefings on how the US could help that nation in its development efforts if it moved toward a democratic future.

She “really impressed the President,” and consequently had “tremendous support” to succeed Blake “among those who matter in the White House, who are rooting for her.”

Blake has always fondly referred to Biswal as ‘my close friend and colleague”, and spoken glowingly of what an asset she is to the administration.

Biswal will create history by being the first Indian American to occupy this position since a separate South Asia bureau was created in 1991 thanks to the efforts of then the staunchest supporter of India in the US Congress, late Democratic lawmaker from New York Stephen J Solarz.
Solarz at the time chaired the Asia and Pacific Affairs Subcommittee of the Foreign Affairs Committee that had jurisdiction over affairs pertaining to South Asia.

Much to Solarz’s chagrin at the time, President Clinton had appointed Robin Raphel as the first assistant secretary for south Asian affairs and she was a disaster for India-US relations.

At her first-ever briefing at the Foreign Press Centre, she declared that the US did not recognise the instrument of accession of Kashmir as an integral part of India.

But the situation was salvaged when Clinton in his second term appointed Karl F 'Rick' Inderfurth to this position.

Inderfurth and his counterpart at the National Security Council in the White House, Bruce Riedel, were part of the transformation of India-US relations that took place during Clinton’s second term and culminated with his historic trip to India in March of 2000.

President George W Bush, in his first term, also appointed a mediocre albeit less controversial official Christina Rocca. In his second term, he made amends by appointing career diplomat Richard Boucher, but US-India relations progressed exponentially at the time since it had the imprimatur of the President himself and that of Secretary of State Condoleezza Rice, who drove the relationship, resulting in the historic India-US civilian nuclear deal.

But perhaps the most experienced South Asia hand appointed to the position since its creation was Blake, who came to the job after serving as the deputy chief of mission in New Delhi and then US ambassador to Sri Lanka.

Administration sources told rediff.com months ago, when they disclosed that Biswal would be nominated by Obama, that she would bring expertise, experience and gravitas to the position.

Sources told rediff.com that like her current boss Shah, Biswal too is loved on both sides of the aisle in Congress and lawmakers have been impressed by her experience and commitment whenever she has appeared before the Senate Foreign Relations and House Foreign Affairs Committees.

They contended that the confirmation of her nomination is likely to be non-controversial and a shoo-in. 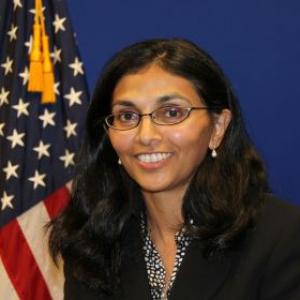