'Didi vs All': Shiv Sena extends support to TMC in Bengal

After Rashtriya Janata Dal and Samajwadi Party, the Shiv Sena on Thursday extended its support to the Trinamool Congress supremo Mamata Banerjee, and said it would not contest assembly elections in Bengal. 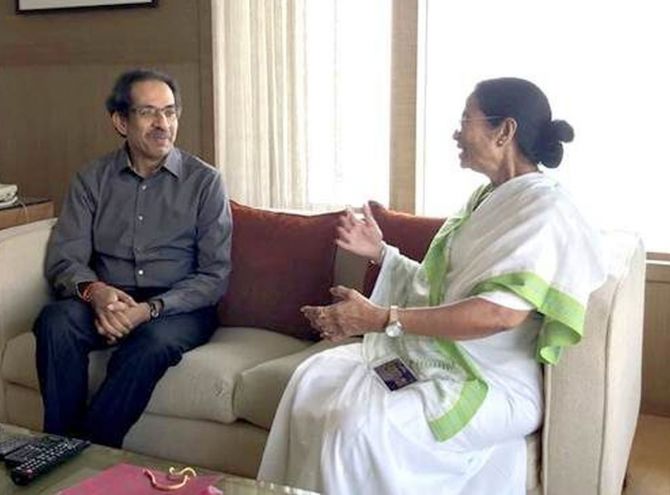 Hailing Banerjee as the "real Bengal tigress", the party, which had earlier said that it would join the electoral battle in the state, vowed to "stand in solidarity" with the TMC camp.

Senior Shiv Sena leader and Rajya Sabha MP Sanjay Raut, in a tweet, made the announcement and said that the decision was taken following discussions with party president and Maharashtra Chief Minister Uddhav Thackeray.

Raut took to Twitter and said "at the moment, it appears to be a Didi vs All fight".

"A lot of people are curious to know whether Shiv Sena is contesting West Bengal polls or not? So here's the update after discussions with party president Uddhav ji Thackeray."

"All 'M's -- Money, Muscle and Media -- are being used against 'M'amata Didi. Hence, Shiv Sena has decided not to contest West Bengal polls & stand in solidarity with her.

"We wish Mamata Didi a 'roaring' success, 'cos we believe she is the real Bengal Tigress," he added.

"We welcome Shiv Sena's decision. We are thankful to Shiv Sena for not putting up candidates in the assembly polls in West Bengal," TMC MP Sougata Roy said.

The BJP, however, declined to attach much importance to the development.

"What is the stake of Shiv Sena, RJD or SP in Bengal? They don’t have any presence in Bengal. It hardly matters whom they support or not. It is laughable," BJP state general secretary Sayantan Basu said.

Earlier this week RJD leader Tejashwi Yadav met Banerjee at Nabanna and extended his support to the Trinamool Congress.

Samajwadi Party leader Akhilesh Yadav too has extended his party support to TMC.

A significant takeaway of the Shiv Sena, SP and RJD pledging support to Mamata is that they are shunning Congress and siding with the Trinamool Congress in the battle for Bengal.

Congress, which has entered into alliance with the Left Front and Indian Secular Front of Muslim cleric Abbas Siddiqui for the Bengal polls, promises to defeat the TMC as well as the saffron party in battle royale in the eastern state.
The three parties though do not have any electoral presence in Bengal, they could mobilise some hindi speaking voters in some pockets in favour of the Trinamool Congress.

Shiv Sena is with the Congress in the Maharashtra government, but it has preferred TMC instead of the grand old party in Bengal.

Lalu Prasad headed RJD though had one MLA in 2006 to 2011 during the Left Front rule in Bengal is also a marginal player in the state.

RJD is also an ally of the Congress in the opposition Grand Alliance in Bihar, but has opted for Mamata in Bengal instead of that party.

The RJD promises to rally some Hindi speaking electors of Bengal in support of Mamata particularly in the areas on border with the Bihar, where it's the single largest party.