The 15-month-old Kamal Nath government in Madhya Pradesh teetering on the brink of collapse got a reprieve from the Assembly Speaker who did not take up the floor test on Monday. 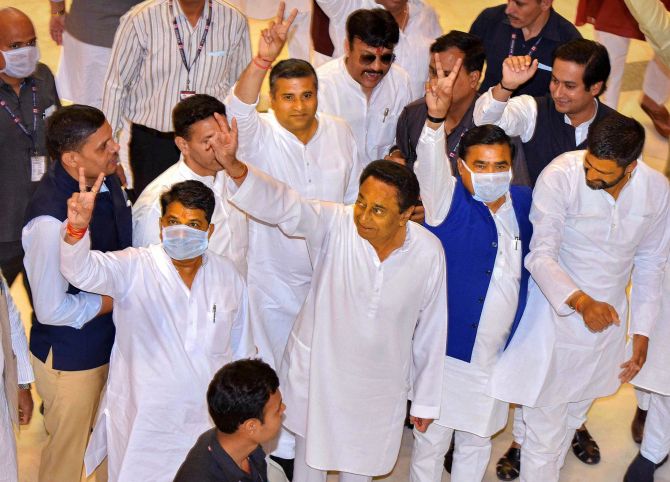 Citing coronavirus concerns, the 15-month-old Kamal Nath government in Madhya Pradesh teetering on the brink of collapse got a reprieve from the Assembly Speaker who did not take up the floor test on Monday as directed by the Governor and adjourned the state assembly till March 26.

As Governor Lalji Tandon asked Chief Minister Kamal Nath to test his majority on Tuesday in a fresh directive following the resignation of 22 Congress MLAs, the tussle for power in the central state also moved to the Supreme Court with a miffed senior Bharatiya Janata Party leader Shivraj Singh Chouhan seeking its intervention.

Chouhan, a former chief minister, sought a court direction to the state government to face a floor test, shortly after Speaker N P Prajapati announced the adjournment of the budget session which commenced on Monday.

The apex court agreed to hear Chouhan's plea on Tuesday in a throwback to its intervention during political crisis in states including in Karnataka and Maharashtra in the last couple of years when it
favoured floor tests without any delay.

The plea contended that Governor Tandon's direction to the chief minister on Saturday to seek a floor test on March 16 immediately after his address to the House was not complied with.

The plea, mentioned before the mentioning officer of the apex court for urgent hearing, said the Speaker, the Chief Minister and the Principal Secretary of the Assembly be directed to "hold the floor test in the Madhya Pradesh Legislative Assembly within 12 hours of the passing of the order by this court and as directions... issued by Governor".

"Even coronavirus cannot save this unstable government," Chouhan said in response to a query by a reporter on concerns about the spread of the disease being cited by the state government for the adjournment of the House. Chouhan also claimed the BJP a enjoyed majority in the House.

Chief Minister Nath for his part dashed off a 6-page letter to the Governor stating that holding of a floor test in the assembly would have been "undemocratic and unconstitutional" since some MLAs of the
Congress are being allegedly held in "captivity" by the BJP with the help of the police in the BJP-ruled Karnataka.

Speaker Prajapati adjourned the House after Legislative Affairs Minister Govind Singh brought up the issue of coronavirus scare, saying the World Health Organisation has declared it a pandemic.

"You all know that in the wake of (Covid-19) pandemic outbreak, the ongoing assembly sessions of Rajasthan, Kerala, Odisha, Chhattisgarh and Maharasthra have been adjourned," he said addressing Govind
Singh's concerns soon after the governor finished his customary address on the first day of the Budget session within a minute and left the House.

BJP chief whip in the Assembly Narottam Mishra said the chief minister should seek a trust vote on Monday itself as directed by the governor. There were noisy scenes after Congress legislators objected to the demand.

Leader of Opposition Gopal Bhargava said the trust vote should be held on Monday itself to which Prajapati said the opposition hasn't held any discussions with the Speaker over the issue.

The treasury and opposition benches traded charges and amid the commotion, the Speaker left the House for a while.

When he returned, the opposition pressed for the trust vote vociferously, while the treasury benches opposed them.

Amid the noisy scenes, Singh drew the attention of the Speaker to the coronavirus situation which, he said, has assumed alarming global proportions.

The Speaker then adjourned the House till March 26.

The drama didn't stop after the House was adjourned, as 106 MLAs of the BJP, led by Chouhan reached the governor's residence and demanded that a floor test be held immediately.

Meanwhile, Nath dared the BJP to bring a no-confidence motion against his government.

Earlier in the day, the BJP MLAs reached the assembly in three separate buses along with senior party leaders, after arriving in Bhopal from Manesar in Haryana around 2 am.

Many legislators were seen covering their faces with masks amid the threat of coronavirus. These masks were provided by the state Assembly secretariat.

Talking to reporters after meeting the governor, Chouhan said, "Kamal Nath government is in a minority. This government has lost its majority. The governor had directed the chief minister to prove his majority in the floor test on March 16. They should not have had any problem in facing the floor test, if they have majority".

Chouhan said Nath has no constitutional right to run the government after losing majority, in view of 22 Congress MLAs tendering their resignation from the House.

"The number of Congress MLAs in the House has reduced to 92 (after resignation of 22 MLAs). We have 106 MLAs who have come to Raj Bhawan. The BJP has a clear majority now. The Congress government is evading the floor test," he said.

The BJP has 107 seats in the House, which now has an effective strength of 222 in the 230-member Assembly, with the majority mark being 112.

The seven others are two MLAs from the Bahujan Samaj Party, one from the Samajwadi Party, and four Independents who have supported the Nath government and whose next move is keenly watched.

Filed through lawyer Saurabh Mishra, Chouhan's plea submitted that the Kamal Nath government has been reduced to a minority and it has no moral legal, democratic or constitutional rights to remain in power even for a single day.

It said any deferment of the floor test will further encourage "horse trading" and will be in utter violation of the directions issued by the Governor, law laid down by this court and the spirit and basic structure of the Constitution of India. 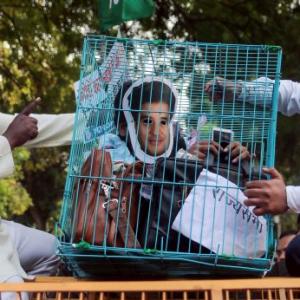