'Unlike the Congress, the BJP is not a party that merely goes by family connections.'
'Scindia's future will depend on what he brings to the BJP table.'
'The BJP is also a party where vertical growth is mostly factored by RSS preferences.'
'To secure confidence of the saffron brotherhood, Scindia will have to be his grandmother's grandson and not his father's son,' notes Nilanjan Mukhopadhyay. 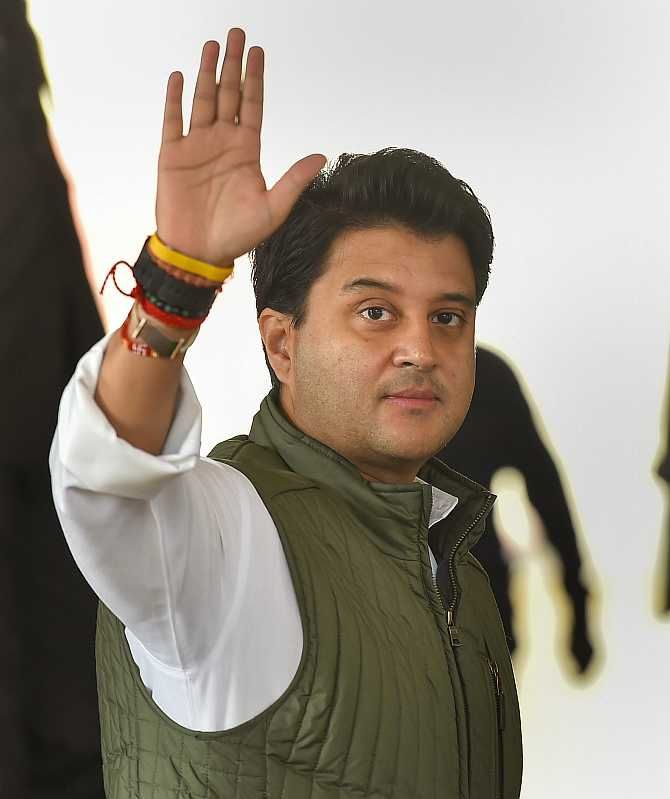 The third generation political dynast of the Scindia family that once ruled Gwalior state, Jyotiraditya Scindia, has made his first move towards the Bharatiya Janata Party.

The still unfolding saga is characterised by multiple ironies, The first of these is that among various planks used by the BJP to acquire hegemony on Indian politics is its high-pitched campaign against political dynasticism.

It is ironical because the BJP has the highest share of lawmakers and leaders who were preceded by at least one family member in Parliament, state assemblies or party politics.

To this tally, it has added another one, at least as ally.

This brings a total of four 'Scindias' on the side of the party -- Jyotiraditya's aunts Vadundhara Raje and Yashodhara Raje and cousin Dushyant Singh being the other three.

The immediate future of the one-time Congress minister and close associate of Rahul Gandhi will be known over the next couple of weeks, possibly after conclusion of the ongoing Budget session of Parliament.

The widely expected expansion/rejigging of the Union council of ministers is expected around that time and it will be known if Scindia makes it back to the ministry, under a different prime minister.

But it is his long-term future, either as member of the BJP or as an NDA partner, that Scindia should be worried about.

His first worry will stem from his ability to 'deliver' rebel Congress MLAs to the BJP fold.

This is not an easy matter given that it will be first determined by the question of whether the Kamal Nath-led Congress government survives or not, and if resignations of the 22 MLAs who hoisted the flag of rebellion is accepted by the Madhya Pradesh assembly speaker or not.

Even thereafter, it will be not be easy to retain their loyalty.

Jyotiraditya's second concern stems from the fact that unlike the Congress, the BJP is not a party that merely goes by family connections, at least after the initial push or embrace.

Scindia's future will depend on an assessment of what he brings to the BJP table besides ambitious legislators.

The BJP is also a party where vertical growth is mostly factored by preferences of the Rashtriya Swayamsevak Sangh.

To secure confidence of the saffron brotherhood, Scindia will have to be his grandmother's grandson and not his father's son.

Furthermore, the BJP has several factions and it is not going to be easy for him to secure his position within the party.

If Scindia eventually chooses to plough the lonely furrow and sets up a small proprietory outfit of his own, like his father Madhavrao Scindia once had, the path will not be any easier, because he has little past experience of party building.

Driven by the mentality that most 'entitled' scions are, he has not risen in politics by the grind and this deficiency will show when he is on his own.

This is where deeper and older ironies regarding the past relationship between Scindia and the BJP need to be mentioned.

Additionally, there are paradoxes rooted in history -- firstly the stance of his ancestor, Jayajirao Scindia, who was the ruler of Gwalior in 1857 during the First War of Indian Independence, and secondly, the role of his grandmother, Vijaya Raje Scindia, popularly called Rajmata, who was the first prominent woman leader of the BJP and its preceding party, the Jana Sangh.

It is, after all, no easy matter to be a scion of a political dynasty that has been on both sides of India's deepest ideological divide.

The Rajmata herself started out in politics as a Congress member in 1957.

Although she and the royal family did not hide their proclivity towards the Hindu Mahasabha, she continued to represent the Congress in the Lok Sabha for a second term in 1962.

Over the next five years, Vijaya Raje got disillusioned with the Congress, interestingly not for political reasons, but because of personal loss stemming from then finance minister Morarji Desai's decision to promulgate the Gold Control Act limiting possession of gold with individuals and families to up to four kilograms.

The Rajmata termed the measure as the 'venomous sister of prohibition' mainly for suffering a personal loss of 11.7 kilograms of gold that she had to surrender.

By the time of the 1967 general election she had abandoned the Congress and decided to sail on two boats -- the Swatantra Party for the Lok Sabha and the Jana Sangh for the assembly election.

Finally, she opted for the latter and began a disrupting career in state politics.

The Rajmata actually provided the template for what we have seen unfold in Bengaluru, Gurugram and Jaipur -- legislators holidaying to remain herded.

She had a running duel with Dwarka Prasad Mishra, then Madhya Pradesh chief minister (now often also referred to as Brajesh Mishra's father).

Vijaya Raje helped the Congress chief minister's rival rebel Congress leader Govind Narayan Singh split the Congress and cart rebel legislators to Delhi where they were confined in a hotel and later paraded in front of then President Dr Zakir Hussain, who after ascertaining their numbers, decreed that the Congress had lost its majority.

In that era, the President and governors still acted of their own volition!

Unlike the Rajmata, her son Madhavrao began with the Jana Sangh in 1971 when he became a member of the Lok Sabha.

He later hopped across to the Congress during the Emergency, partly because of convenience, but chiefly due to differences with his mother which remained till her death.

Jyotiraditya stepped into his father's shoes in 2002 by contesting a by-election after his father's untimely death and it is this association which will be flagged by his rivals within the saffron party.

In 2010, the Gwalior municipal corporation accused Jayajirao Scindia of 'betraying' Rani Laxmibai of Jhansi by providing her with a 'weak horse'.

Anomosity between Jyotiraditya and the BJP unit in Gwalior is well known and their evolving relationship will have to be tracked.

Jyotiraditya has acted to avenge his marginalisation within the Congress, but it is not going to be easy for him to a secure a very prominent position within the BJP.

The BJP has certainly been a net gainer as the episode deflects attention away from the multiple challenges it faces.

Likewise, the biggest loser, notwithstanding the developments in MP, is the Congress leadership, Sonia Gandhi and her son Rahul.

It is premature to draw a P&L statement for the man who has triggered this political upheaval.

Nilanjan Mukhopadhyay, journalist and author, is the author of The RSS: Icons of the Indian Right and Narendra Modi: The Man, The Times. 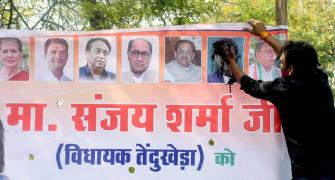 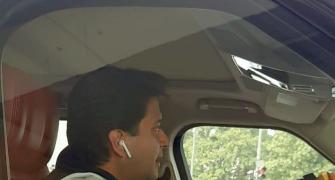 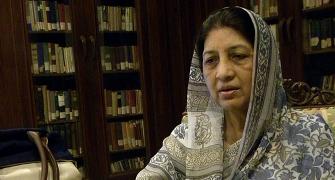