There are also over 10 million voters in the 18-29 age bracket. Winning them over could be Nitish Kumar’s biggest challenge, reports Aditi Phadnis. 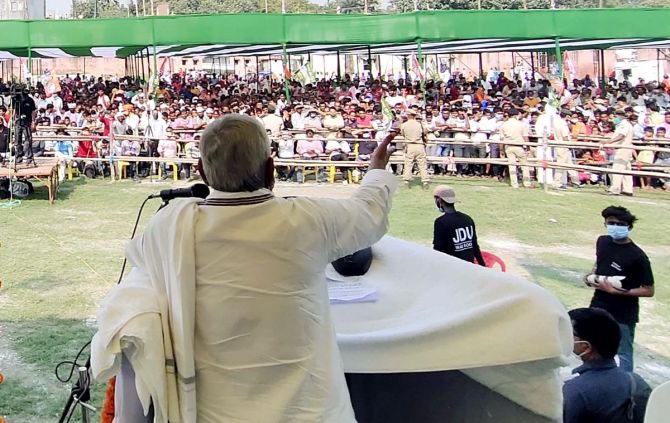 As Bihar votes in the first phase of assembly elections and voters hope the next five years are better than the last five, many of the principal actors look upon this election merely as a stepping stone to the next one.

For Tejashwi Yadav of the Rashtriya Janata Dal and Chirag Paswan of the Lok Janshakti Party, this election is a route to power -- not necessarily to the throne.

For incumbent Chief Minister Nitish Kumar of the Janata Dal-United and the Bharatiya Janata Party, the election is a way of consolidating their hold with the joint appeal of Prime Minister Narendra Modi and Nitish in the hope of repeating the 2019 Lok Sabha verdict, when the team won 39 out of 40 Lok Sabha seats.

But recent memory is short. Chief Election Commissioner Sunil Arora said in Patna that the Election Commission had ensured not one of the 230,000 migrant workers who had returned to Bihar villages in the wake of pandemic would lose out on the opportunity to vote. This is the first time an official number has been put on migrants, who are angry and bitter that the state government did very little to ensure their return home.

However, voters do acknowledge that Nitish Kumar’s 15-year rule (barring Jitan Ram Manjhi’s short interregnum) has ensured extensive infrastructure development. The benefits of this have been caste-neutral.

In Central Bihar -- which votes on Wednesday -- as in the rest of the state, the Opposition refrain is lack of jobs. In their manifesto, every party, whether the BJP or RJD or JD-U, has flagged it as the biggest challenge. RJD has even promised a Rs 1,500 allowance to unemployed youth. The prevailing debate is over whether the government can provide 100,000 state government jobs, as the RJD has promised, or near-universal employment as the BJP has said it would.

“Employment and job are different. We’re talking about 10 lakh government jobs... Our promise is genuine. We could have also made fake promises of 50 lakh jobs like the NDA government,” Tejashwi Yadav has said in his public interactions.

Among the other promises the RJD has made are higher Minimum Support Price (MSP) and loan waivers for farmers; better healthcare facilities; better concrete roads; and computer centres in villages, hike in the education budget and more teachers in government schools.

None of the political forces has claimed they can better Kumar’s infrastructure development record. This is a comment in itself.

The JD-U’s appeal lies in reminding people what 15 years of rule has achieved and promising more of the same.

“We have given people roads, tap water and power. If given another chance, we will ensure solar streetlights on every road. We have built thousands of school buildings, have improved health services and have built all-weather roads for better connectivity,” Nitish Kumar said at election meetings in Vaishali and Muzaffarpur.

Alliance partner BJP has repeated not only that Nitish Kumar will continue to be chief minister, but also that people can look out for the power of two with the same party at the Centre and the state.

However, in this phase of polling, it is NDA alliance partner LJP that will be on test. Central Bihar is the area where is has the largest presence, specifically in Hajipur and Vaishali. It has repeatedly said it is an ally of the BJP, but a large number of BJP rebels have been accommodated by the LJP, which is probably why Modi did not mention LJP by name in any of his rallies.

The central issue is whether the JD-U can retain its strike rate and holds its own: Otherwise, Nitish Kumar’s autonomy could be severely compromised if the alliance returns to power.

The biggest asset for Nitish Kumar is the 30 million-strong women voters of Bihar who he has empowered in many different ways: From ensuring reservation in local government, to imposing prohibition in the state.

There are also over 10 million voters in the 18-29 age bracket. Winning them over could be his biggest challenge.