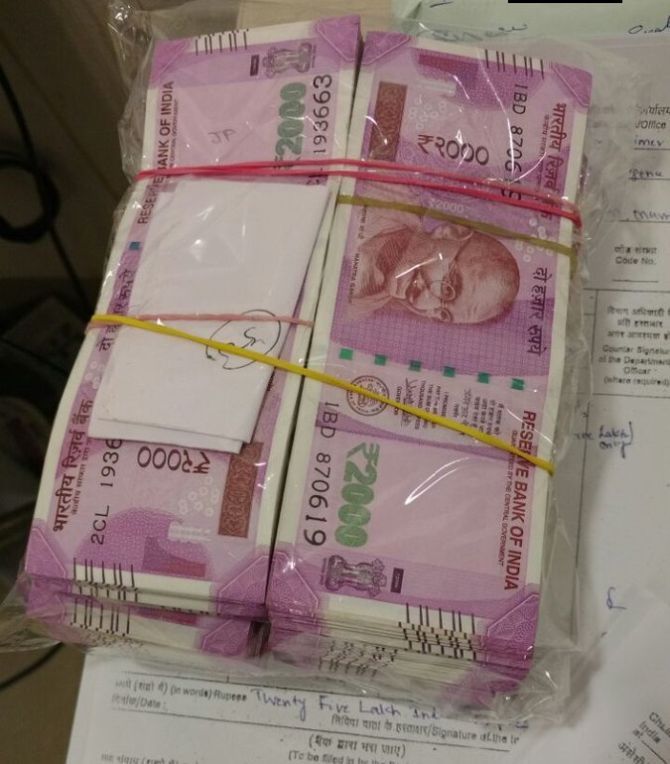 The Air Intelligence Unit of the Customs made these seizures at the international airport in Mumbai in the wee hours and four persons were arrested in this connection.

In the first case, foreign currency worth over Rs 43 lakh was recovered from three passengers -- Shaikh Waheed Ali, Mohammed Sohail and Shaikh Pasha -- who arrived in Mumbai from Hyderabad.

This money was found wrapped in newspapers and was concealed in their check-in baggage.

The trio, in their statement, has said that they brought the foreign currency from Saudi Arabia during their visit last week but did not declare the money before the Customs.

“They have also said that they came to Mumbai for conversion of the currency expecting good returns,” the official said.

They were arrested after a case under Customs Act and Foreign Exchange Management Act was registered against them.

In another case, one Arif Koyante who was departing to Dubai was arrested after Rs 25 lakh, in Rs 2,000 denomination, was seized from him.

Officials said a search of his baggage yielded 1,250 notes kept in 52 different envelopes made of white paper.

“These envelopes containing currency were further placed inside layers of 13 cardboards on which ready made garments were neatly wrapped,” said the official, adding that the currency was seized on the reasonable belief that it was attempted to be smuggled out of India.

A case under Customs Act and FEMA has been registered against Arif and he has admitted to possession, carriage, concealment and recovery, the official said.