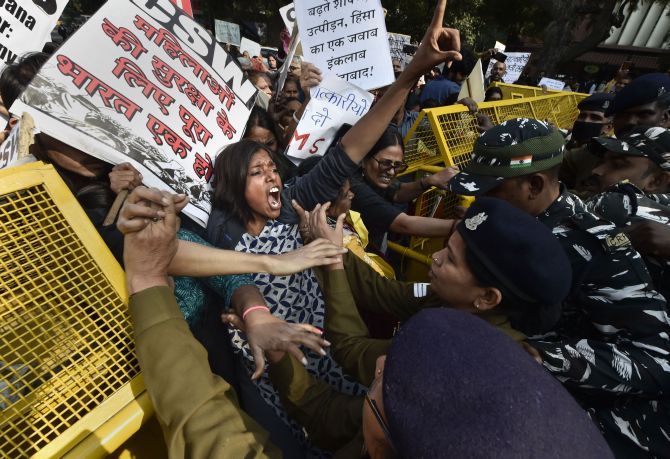 A united Parliament erupted in outrage and anger spilled onto the streets in several states on Monday over the rape and murder of a young veterinary doctor in Hyderabad, as MPs demanded swift death penalty, public lynching and castration of rape convicts.

As the Centre said it was ready to amend laws to bring in stringent provisions and ensure speedy justice, Rajya Sabha Chairman M Venkaiah Naidu even suggested a rethink on allowing convicts in heinous crimes to go in for mercy appeals.

Cutting across party lines, the MPs in the Lok Sabha and the Rajya Sabha condemned the Hyderabad incident 'in one voice' and demanded strict laws that punish the guilty in crimes against women within a fixed time-frame.

Responding to a discussion during Zero Hour in the Lower House, Defence Minister Rajnath Singh said he was falling short of words to condemn the heinous crime.

There was no let up in protests in Hyderabad and other parts of Telangana with students, activists and lawyers taking out rallies and holding demonstrations demanding death penalty for the four accused arrested in the case.

The protesters shouted slogans like 'We want justice' and held placards that read 'Hang the rapists'.

Dozens of people also staged protests at the Jantar Mantar in the heart of Delhi.

"This is my first time in a protest. I am here because just like a woman who stays in Delhi away from home, the issue affects me and my family," said Aditi Purohit, a student of Delhi University's Hansraj College, as she broke down while shouting slogans demanding capital punishment for the accused.

The charred body of the victim, working as an assistant veterinarian at a state-run hospital, was found dumped under a culvert at Shadnagar near Hyderabad on the morning of November 28, a day after she went missing.

Four men, all lorry workers and aged between 20 and 24, were arrested on November 29 on charges of raping and killing the woman. They were sent to judicial custody for 14 days on Saturday.

The four, who faced violent protests while being taken to the prison, are now kept in solitary confinement at Cherlapally Prison.

The Police probing the crime sought the custody of the four for interrogation.

The Cyberabad police filed a petition in a court at Shadnagar near Hyderabad for custodial interrogation of the accused, a senior police official told PTI.

The official said they would complete the probe in a time-bound manner.

Speaking in the Rajya Sabha, Samajwadi Party's Jaya Bachchan said the rapists should be 'brought out in public and lynched'.

Dravida Munnetra Kazhagam's P Wilson said courts should be empowered to surgically and chemically castrate convicted rapists before they are released from jails so as to check repeat offenders.

Leader of the Opposition Ghulam Nabi Azad (Congress) said the society will have to tackle this problem at its root and the guilty should be given stringent punishment without any discrimination on the basis of religion or caste.

Mohammad Ali Khan of the Congress and Sanjay Singh of the Aam Adami Party demanded that the trial and punishment be carried out within a fixed time frame.

Voicing his anguish, Lok Sabha Speaker Om Birla said, 'We in one voice' condemn such incidents.

Rajnath Singh said the government is ready for discussions in the House so that stringent provisions in laws could be explored to give punishment to those involved in ghastly crimes against women.

The minister said the incident has hurt everyone. He observed that such heinous crimes were happening even after strict laws were framed following the Nirbhaya rape and murder incident.

As one member after another mentioned the Hyderabad incident, Union minister G Kishan Reddy said the government is ready to amend the Indian Penal Code and the Code of Criminal Procedure to ensure swift justice in heinous crimes.

The Centre had written to states and police forces over the issue, he said, adding all political parties will be consulted.

As soon as the House met for the day, Speaker Om Birla said he would allow members to raise the 'serious issue' in the Zero Hour.

Saugata Roy (Trinamool Congress) was of the view that the House should take cognisance of this serious incident and urged the Centre to immediately frame laws to make rape punishable by death sentence.

Observing that such brutal incidents create a bad atmosphere across the country, Bandi Sanjay Kumar (Bharatiya Janata Party) said that 'we need to implement punishment on the spot'.

He said laws and establishment of fast track courts will not make any difference till the time the death sentence is not executed.

Nationalist Congress Party's Supriya Sule said there should be 'zero tolerance' towards such incidents.

Nama Nageswar Rao of the Telangana Rashtra Samiti, which is in power in Telangana, said the state government had given highest priority to cases of crime against women and noted that accused in this case were arrested within six hours. 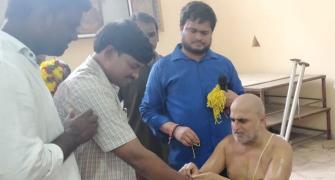