'Every person is a Jatayu, each one of you can be Jatayu, both men and women,' says temple priest behind the group set up to prevent atrocities on women and young girls. 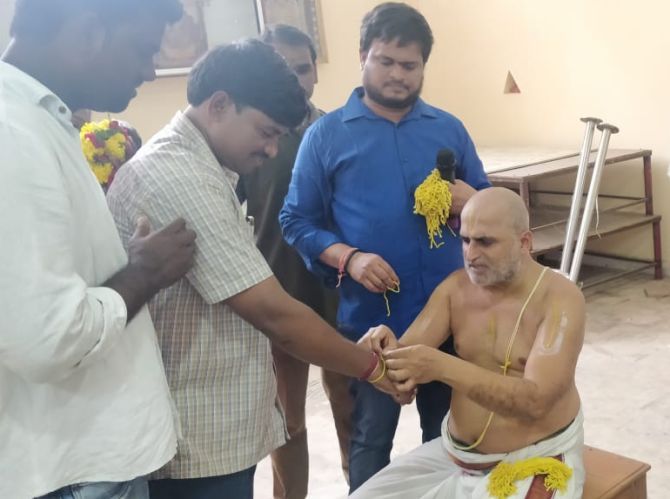 The Chilkur Balaji temple in Hyderabad, also known as the Visa Balaji temple, recently launched a 'Jatayu Army', to prevent atrocities on women and young girls.

Named after the divine eagle that fought Ravana who was abducting Sita and was killed, this is an army to protect the women folk, the temple's head priest C S Rangarajan said.

"Jatayu Army formation is the new initiative, to protect women and girls from atrocities.. We cannot allow any more rapes... Jatayu Army is the only solution," he was quoted as saying by news agencies.

Soon after launching the Jatayu Army in the temple premises in Hyderabad, Telangana, the next day he travelled to Vijaywada to launch the same in its sister state Andhra Pradesh.

He speaks to Rediff.com on what inspired him to launch this army.

"The way Jatayu obstructed Ravana when he was abducting Sita, even though he knew he will lose, is the attitude that I am trying to create, inculcate in our people.

"Society has become irresponsible, insensitive, let me tell you how. A girl on a bus is teased by three boys. There are 40 men in the bus but nobody interferes. They behave like CCTV cameras and watch.

"If just one man shouts at the boys the others will join him. That man is Jatayu. "On the day we launched the Jatayu movement, the first boy we honoured was Nadeem. He is a labourer. He saw a young girl being abducted on a scooter. She was screaming but nobody interfered. He decided to interfere and started hitting the abductor. Others immediately joined in, the police came and arrested the abductor.

"They found blankets and sedatives in the scooter. Nadeem possibly stopped another Nirbhaya.

"Every person is a Jatayu, the concept of Jatayu is being a responsible society, an aware society, a society with the attitude to protect a woman and a child.

"A person can escape the law but not Jatayu. Remember, the law stands for retribution and punishment but Jatayu stands for prevention.

"This Jatayu Army doesn’t have commanders and officers or divisions and exercises. What it has is discipline and an attitude to protect the weak and the helpless.

"Not on my watch, is our slogan.

"This is not an army in the regular sense of the word but a collective effort of dedicated people individually committed to protect women and children.

"This is not against law agencies. We are working with them. It is preventive. We are helping law agencies to uphold the law.

"Helping others doesn’t need any legal sanction and it is never illegal.

"Let me tell you about love jihad vigilantes who beat up the girl. That person is not a Jatayu as the girl has been ill-treated. Our people would not have allowed it.

"Anybody can set up a group of people to help others, helping is never a crime.

"Actually, this idea originated two months back in a conversation with my temple disciple Pawan Kumar. We were travelling to Warangal to condole the death of a nine-month-old baby who had been raped and murdered. The rapist was convicted in 53 days. 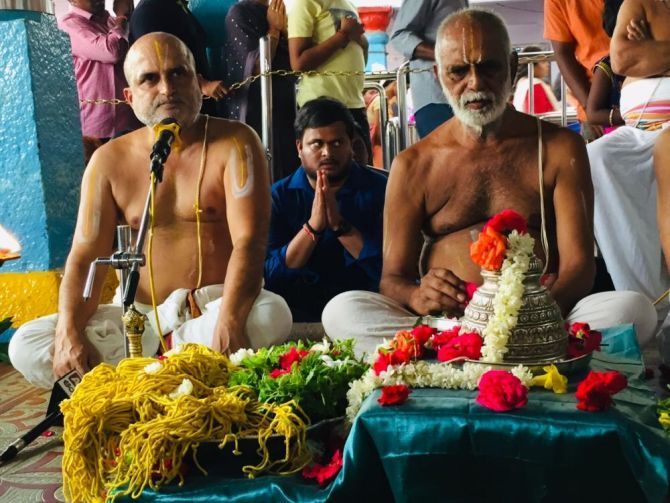 IMAGE: The initiation ceremony for Jatayu army is held on the Chilkur Balaji temple premises in Hyderabad.

"I told Pawan that this would not have happened if Jatayu was around. When he asked me about Jatayu, I related the incident from the Ramayana.

"Ravana had abducted Sita and was on the way to Lanka when he was accosted by a giant bird Jatayu. Ravana cut off both the wings of the bird but he continued to fight. Ravana left him mortally wounded but he held on to his life till Lord Rama came there.

"He died only after telling Rama that Sita had been taken to Lanka.

"The number of paedophiles is increasing in society. Penal provisions are increasing and there is anger in society. The law is punitive and retributive. But it is still not working. Rape of women and children is not decreasing with stricter laws and greater punishment. What we need is preventive measures.

"Each one of you can be Jatayu, both men and women."

As told to A Ganesh Nadar, Rediff.com.