'The death penalty exists in India for murderers. Is it a deterrent and does it stop murders?' asks Aakar Patel. 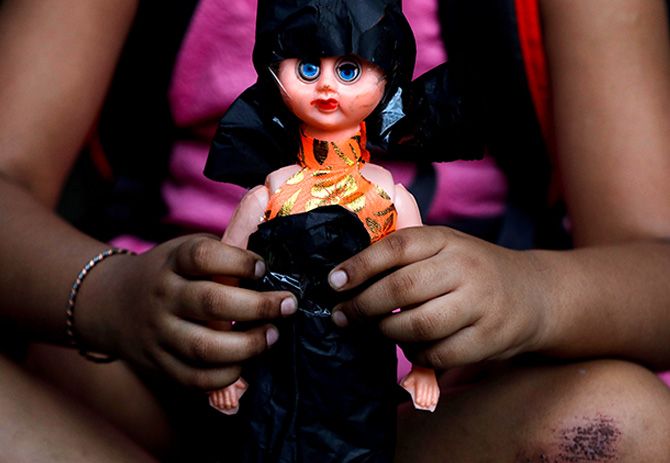 A child at a protest against the rape of an eight-year-old child in Kathua, Jammu and Kashmir, and a teenager in Unnao, Uttar Pradesh. Photograph: Cathal McNaughton/Reuters

How should we as a society react to events as have happened in Kathua and in Unnao?

India has become notorious around the world as a place where women and children are unsafe from sexual violence, and even if this is not the reality it has become the perception.

It should not take foreign media for us to look at ourselves honestly and ask how we can change.

What are the reasons we are unable to prevent such episodes and what actions need to follow so that we can reduce them?

The first thing is that we must accept that this is not just a function of the justice and policing system.

There is a breakdown of values, and in a place where women and minorities are respected, there is no encouragement to bestiality.

Do we live in such a place?

The honest answer to that is obvious. Saying that the government should do something to stop such violence from happening ignores our own roles.

With that understanding, let us now look at what the government can be convinced to do.

There are essentially two things that can act as a response to preventing sexual assault and rape.

One of those is legislation. One popular demand that recurs every so often is to hang the rapists.

The thinking is that harsh punishment is a deterrent and that the potential rapist will be worried about the consequences and therefore not carry out the act.

There are many counters to it, including that having the same punishment for rape and murder encourages the rapist to kill his victim so that there is no witness.

But let us ignore that for now.

Politicians usually favour this solution and if you look at the newspapers of recent days many are in agreement that there should be the death penalty for rapists.

The death penalty exists in India for murderers. Is it a deterrent and does it stop murders?

Let us look at the numbers.

Handing out death sentences does not stop murderers.

Our laws also provide for appeal and remission, and so the number of people who were actually hanged in 2016 was zero.

We should understand this when we seek a silver bullet to end rape in the form of the 'hang the rapists' demand.

Now let us look at the numbers for rape and sexual assault.

The total number of rape cases registered in India was 38,947 and there were over 106,000 crimes against children.

The problem with the rape number is that government data suggests that 99% of victims of sexual violence in India do not report the incident to the police.

And only 6 people, meaning less than 1% are actually finally jailed.

This means that we are not alone in not being able to deliver justice and it is a complex issue that requires a lot of thinking and a lot of hard work.

There are various issues here, some are social and some that can be corrected by the State.

The common factor between victims in India and elsewhere is that rape is an intensely personal crime and that not one that is easy to share.

The social issues in India are many, and the position and treatment of women in our society is the main one.

The second one is that we believe that family 'honour' is reposed in the body of women and that it is 'lost' when a woman is assaulted.

This prevents individuals from revealing details even to family, leave alone strangers in the police station.

There are things that the police can do and it is to follow the law.

The law says that all victims in India can report in any police station of their choosing (and not only in the one in whose jurisdiction the crime is committed), secondly the victim can choose to record her statement in any language of her choosing.

This is difficult because most police stations do not have individuals who speak even English properly, and prefer to record the FIR in the local language only.

Thirdly, the victim's statement must be recorded by a woman police officer.

This again is not done, because of the lack of women police officers and the lack of police generally.

One popular slogan is 'minimum government, maximum governance', but these are meaningless words when the size of the Indian government, as measured by the number of police, doctors, nurses etc, is very small per capita compared to the rest of the world.

The facts show that to prevent sexual crimes we have to make large changes in our society and its treatment of women at the level of the family.

And we need to ensure that the existing laws on reporting sexual violence are followed at the level of every police station across India.

This is very, very, hard work, but it will ensure that the rate of reporting goes up, at least to the levels where it is in the rest of the world.

After the rate of reporting goes up, the State needs to ensure that it conducts proper investigations (which need resources and cannot be done with the same force or budget) that increases the rate of convictions.

All of this is difficult, and most politicians know that it is close to impossible.

That is why the easy way is chosen and that is to demand that rapists be hanged.

The fact that murderers are also hanged and it has no effect on murders does not seem to worry us. 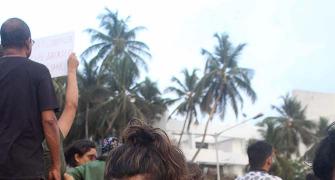