MoD's Big Made In India Push

Banning the import of platforms that are already being built in India serves little purpose. The ministry of defence (MoD) revealed in Parliament on Friday, July 22, the names of 18 major defence platforms that can no longer be imported.

Instead, they will henceforth be indigenously designed and developed (D&D) by domestic industry.

'In continuous pursuit of achieving self-reliance in defence manufacturing under Aatmanirbhar Bharat Abhiyan and in sync with the announcement made in the Union Budget 2022-23 that allocated 25 per cent of the defence R&D budget for industry-led R&D, 18 major platforms have been identified and announced by the MoD for industry led D&D,' the MoD stated in a written response to a Parliamentary question.

These include army platforms, such as a light-weight tank, self-healing minefields and 'plug-and-play housing' for soldiers posted at extreme altitudes.

The navy platforms includes a 127 millimetre naval gun for capital warships, while the air force platforms include the long-awaited Indian multi-role helicopter (IMRH) and a stand-off airborne jammer.

Defence industry watchers point out that, starting from August 2020, the MoD has issued three lists of defence equipment, the import of which is embargoed.

The August 2020 list incrementally bans the import of 101 items, with the embargo growing wider each year.

In June 2021, an additional list of 108 defence items was issued by the MoD, progressively banning their import.

Invoking 'Atmanirbhar Bharat' repeatedly, the second list -- termed the 'Positive Indigenisation List' -- took up to 209, the number of defence items that must be compulsorily procured from Indian companies, the number rising each year out to 2025.

On New Year's Day 2021, 69 items from the first list were embargoed for import.

It is unclear how this latest import embargo list dovetails with the previous two lists.

The defence industry is sceptical about whether these lists create any pressure to indigenise.

The army is already procuring the K9 Vajra system that Larsen & Toubro builds under a South Korean licence outside Pune, so banning the import of tracked guns is superfluous.

Similarly, the army's entire requirement of tanks has long been built at Chennai and its infantry combat vehicles at Medak.

Banning the import of platforms that are already being built in India serves little purpose.

Similarly, there is little purpose in embargoing the import of naval warships, when most of them are already being built in Indian shipyards.

According to official navy figures, of 48 warships under construction, 46 are being built in India; only two frigates are being constructed in Russia.

Similarly, Hindustan Aeronautics Ltd is already building the majority of the air force's fighter and trainer aircraft in India, with the recent exception of the Rafale.

Banning the import of aircraft such as the Tejas Mark 1A and the Light Combat Helicopter serve little purpose, since these are indigenously designed and manufactured aircraft, as is the HTT-40 basic trainer aircraft.

'These 18 platforms have been identified after extensive consultations between the services, DRDO and the defence industry,' the MoD added.

According to the MoD, most of the platforms --- 14 out of the 18 named -- are to be developed under the Make-I procedure of the Defence Acquisition Procedure of 2021.

A single weapon system -- a 'low orbit pseudo-satellite' -- is proposed to be developed under the innovations for defence excellence procedure.

Finally, another single weapon system -- an 'anti-jamming system for multiple platforms -- is proposed to be developed under the Make-II procedure.

According to Minister of State for Defence Ajay Bhatt, 'These major platforms... have been identified taking into consideration multiple factors like the capabilities of Indian industry, being cost effective, faster and scalable; current technological advancements; requirement of future warfare; operational challenges; need for import substitution etc.' 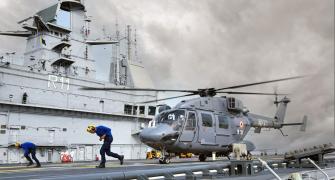 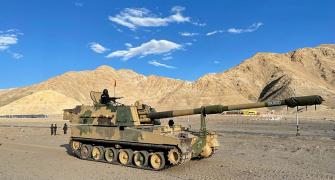 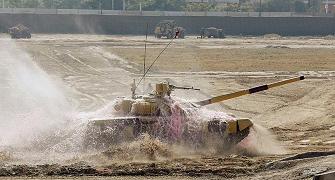