The army has long been deficient in artillery, the modern battlefield’s most lethal killer, reports Ajai Shukla. IMAGE: The first K9-Vajra self-propelled howitzer regiment was deployed by the Indian Army along the Line of Actual Control with China, October 2, 2021. Photograph: ANI Photo

The army's two mechanised strike corps, which are meant to arrow deep into enemy territory during wartime, have over the last five years been equipped with five artillery regiments (100 guns), called the K-9 Vajra.

These 155 millimetre/52-calibre, tracked, self-propelled artillery guns have been built by Larsen & Toubro under licence from the Korean firm, Hanwha Techwin.

While the influx of guns is welcome, the number acquired is clearly inadequate, given that each strike corps is authorised four medium self-propelled regiments, each with 20 howitzers.

Given this shortfall, the army and the ministry of defence are weighing whether to procure another 100-200 mobile self-propelled howitzers.

Three regiments in the second strike corps and seven for the independent armoured brigades that carry out a mobile, offensive role during war.

The army has long been deficient in artillery, the modern battlefield's most lethal killer.

Since the American Civil War, artillery has had a simple function: To pulverise enemy positions completely so that attacking or defending them as the case may be, is a cakewalk for the two combat arms -- the tanks of the armoured corps and the foot soldiers of the infantry.

However, for a variety of reasons, the most obvious being the failure of the army, the Defence Research and Development Organisation (DRDO) and the Ordnance Factory Board to design and manufacture affordable, long-range artillery guns, the army is lacking in firepower.

At the same time, the defence ministry has failed to address this shortfall by acquiring guns from the international market.

This has been a historical weakness in India.

The troop ratio in that battle dramatically favoured the Sultan of Delhi, Ibrahim Lodhi, but he had no field artillery.

Babar's three-to-four gun batteries, and the knowledge and experience of how to use them, caused the sultanate's army to panic.

Meanwhile, the Lodhi army's war elephants, unused to the roar of cannons, ran helter-skelter and trampled large numbers of their own soldiers.

India's modern military inherited the philosophy of artillery usage from World War II and from combat experience in the 1965 and 1971 wars.

In the 1947-1948 Kashmir campaign and the 1962 India-China war, we had hardly any artillery and lacked firepower across the entire frontier. Nor did we have roads to move our artillery guns into better positions for giving fire support.

Consequently, in all the Indian Army's battles since Independence, there have just been a handful of cases where the artillery did well.

One example where the artillery demonstrated its utility was in the use of the 155 mm, 52 calibre Bofors FH-77 gun during the 1999 Kargil War.

With directed artillery fire destroying or degrading much of the enemy's combat potential, our soldiers could stage uphill assaults on Pakistani positions on dominating heights without taking too many casualties.

India has about 226 artillery regiments today and is looking to increase that to 270.

With about 18 artillery guns in each regiment, plus two reserve guns, the arsenal amounts to 5,400 artillery pieces.

In the wake of Kargil, a decision was taken for 'medium-isation' of all the army's artillery regiments.

In addition, there is a growing number of units of multi-barrelled rocket launchers, including six units of the indigenous Pinaka, three Russian SMERCH regiments and five Russian GRAD BM-21 regiments.

Rockets are meant to saturate large area targets with firepower.

In addition, there are three units of BrahMos cruise missiles, and a fourth under raising.

Besides guns, the corps of artillery operates sophisticated surveillance and target acquisition (SATA) systems that pick up and locate enemy guns and radars that can then be destroyed by counter-fire.

These include the indigenous Swati weapon locating radar, which is in service in SATA batteries at the division and corps level.

Enemy guns and battery locations are also detected by LOROS (long-range recce and observation system) systems, imported from Israel. These can pick up vehicles at ranges of 20-25 km.

The simplest way of increasing the range and capability of guns is to increase their chamber size.

The bigger a gun's chamber, the more charge can be exploded in it and, therefore, the longer the range it can hurl a projectile to.

The common chamber sizes in artillery guns are: 19, 23 and 25 litres chambers.

The 155 mm/52 calibre FH-77B Bofors gun has a 19-litre chamber, while the domestic Advanced Towed Artillery Gun System (ATAGS), which the DRDO is developing, has a 25-litre chamber.

A gun's chamber size does not alter its effect on the target, since the same projectile is fired from all three chamber sizes.

All that changes as the chamber size increases is that more propellant burns in it, creating greater pressure on the projectile, propelling it further. That increases the range of the ammunition.

BAE Systems is developing a 58-calibre barrel to increase the range of its M777 155 mm ultralight howitzer. However, these guns are outranged by most contemporary guns, whose 155 mm/ 52-calibre barrel is 52 x 155 mm long, or 8.06 metres.

Another capability improvement the artillery is bringing in is precision.

A gun with greater precision needs to fire less ammunition for achieving the desired effect on a target.

There are two technologies for achieving precision: In the Excalibur ammunition, the projectile is guided precisely to the target with the help of on-board inertial and GPS guidance.

For that, the target's precise coordinates must be known. The Excalibur is not in service with us.

Precision is achieved through another type of guided ammunition called Krasnopol, which is guided onto the target with a laser designator.

India's stocks of Krasnopol, which are now outdated, have been destroyed.

A third way to increase projectile range without increasing chamber capacity or the length of the barrel is to put a ramjet on the rear of the projectile, which propels it further. BAE Systems is already doing that, while the DRDO is pursuing research at academic institutions.

Lethality can also be improved by using higher performance explosives in projectiles.

This is the field of the DRDO's High Energy Materials Research Laboratory, which is working on the bi-modular charge systems. This involves using propellants in a graded system, categorised as Charge 1 to Charge 7, which only ATAGS uses. 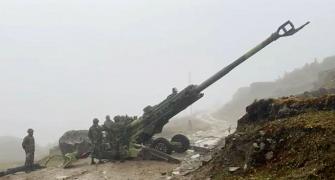 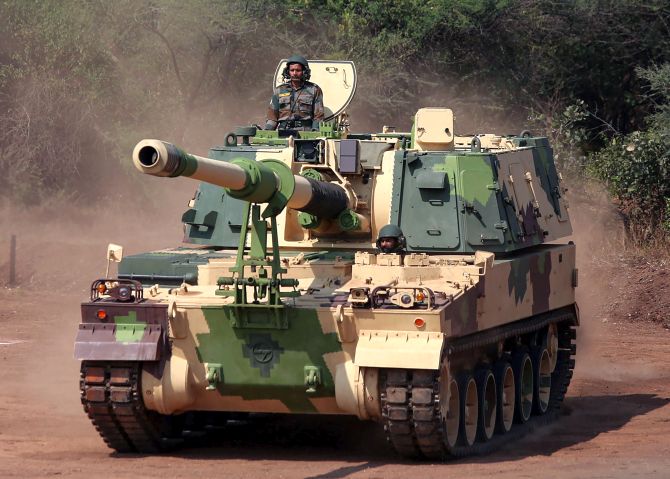 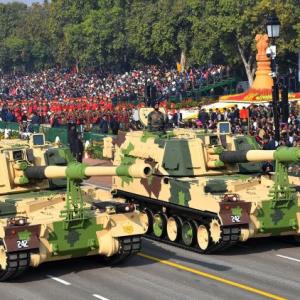