The son of a carpenter father and homemaker mother, who insists on speaking in Hindi and Tibetan back home, but rarely English which he knows well, Jamyang Tsering Namgyal has remained his level-headed self. 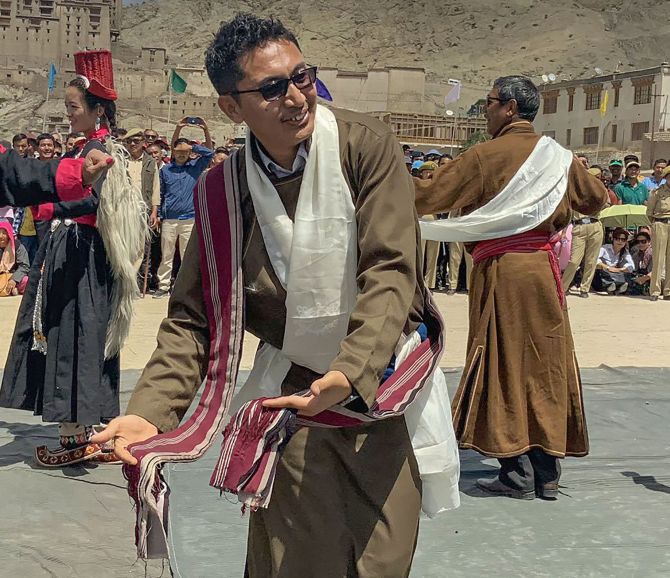 Jamyang Tsering Namgyal, or JTN, as friends and followers of the 34-year-old Bharatiya Janata Party Lok Sabha member from Ladakh address him, is India’s new social media star after his speech in the House on Article 370 and Ladakh getting Union Territory status.

“My Parliament speech was not done for any praise or to make it go viral. I just spoke the Mann Ki Baat of the lovely people of Ladakh,” Jamyang Tsering Namgyal tweeted 24-hours later.

Praise and congratulatory messages from across the country, including Prime Minister Narendra Modi and Home Minister Amit Shah, have inundated Namgyal’s Facebook and Twitter accounts, his WhatsApp and phone inbox.

“I cannot accept more friend request on Facebook as the limit of 5,000 is crossed,” Namgyal tweeted, requesting his fans to “follow” him on his new official Facebook page.

The son of a carpenter father and homemaker mother, who insists on speaking in Hindi and Tibetan back home, but rarely English, which he knows well, has remained his level-headed self as he continues to answer dozens of phone calls, reply to text, WhatsApp and social media messages.

“It’s the love and large-heartedness of the people of India, and I am proud of speaking Hindi,” Namgyal says.

In the Lok Sabha, Namgyal spoke a little while after National Conference’s Hasnain Masoodi.

If Masoodi’s eight-minute speech, where he accused the Centre of violating democratic principles in not consulting the people of Kashmir, had BJP MPs roaring their disapproval, with Shah interjecting more than once, Namgyal’s feisty 20-minute speech brought back smiles on their faces.

To loud cheers from BJP members, Namgyal in his speech accused the Congress, its leaders and Article 370 of discriminating against Ladakh.

He said that the Congress reduced the region, which has a distinct history, identity and ethnicity, to that of a vassal of Srinagar, and ignored Ladakh’s longstanding demand that it should be bifurcated from J&K and made a Union territory.

On Twitter and Facebook, Namgyal has posted videos of celebrations in Leh after Parliament passed the J&K reorganisation Bill that granted Ladakh Union territory status.

Ladakh, as Namgyal pointed out in his Lok Sabha speech, has two sub-regions -- Leh and Kargil.

While Leh is predominantly Buddhist, Kargil is Muslim and has witnessed sustained protests in the last three days.

Namgyal told Business Standard that the Congress and the National Conference have sent “outside elements” to fuel protests in Kargil.

“The protests are not by locals in Kargil, and taking place only in three tehsils. People in villages are happy. I have been receiving lots of congratulatory phone calls, including from local politicians of all political hues,” he says.

There is hope in the region’s villages that panchayats would not have to turn to Srinagar for development funds and permissions for such works as building primary schools, he says.

There is also near-consensus, at least in Leh, in support of the Centre’s move.

Rigzin Spalbar, the Congress candidate whom Namgyal defeated along with a few others to win the Ladakh seat in the 2019 Lok Sabha polls, has welcomed Ladakh getting Union territory status, but also given a call for the next political battle that the region should have its own legislative assembly, just like the new Union territory of J&K.

The demand for Union territory status was part of BJP’s manifesto in the region in 2014, when BJP’s Thuupstan Chhewang won.

Chhewang, 71, a two-term MP, quit the Lok Sabha in 2018, accusing the BJP of being non-serious about delivering on the commitment.

Namgyal had worked as his personal assistant.

Interestingly, the vote shares in Ladakh of various candidates tell its own tale.

Asgar Ali Karbalai, a Congress legislator, who contested as an independent, bagged 23.23 per cent votes, and Sajjad Hussain, another independent supported by National Conference and the Peoples Democratic Party, got 25.3 per cent.

Karbalai has accused Namgyal of distorting facts in his Lok Sabha speech, where the MP said 70 per cent in Ladakh supported the Union territory demand.

Karbalai said the 2011 Census puts the Muslim population at 52 per cent in the Ladakh region, and the majority of people in Kargil are opposed to Union territory status.

“Karbalai was the Congress candidate for all practical purposes. The Congress employs this strategy to win in assembly polls, which also helps a senior leader at the Centre to make it to the Rajya Sabha,” Namgyal says with the authority of a seasoned politician.

During the polls, his opponents in the Congress described him as “chandang” or unripe apricot, Ladakhi slang for an immature person.

“The unripe apricot has ripened now,” Namgyal said at his victory rally.

“Now it is the season for us to shake the apricot trees or beat the branches with sticks to ground the rotting apricots,” he said, alluding to some of the ageing leaders.

Namgyal is no newbie to politics.

After his education in a local school, he graduated from Jammu University and became active in student politics, becoming the president of the All Ladakh Students’ Association.

Subsequently, he joined the BJP’s youth wing, the Bharatiya Janata Yuva Morcha, served in various capacities in the organisation, taught in local schools and started writing on issues like demanding the Bhoti language be included in the Eighth schedule of the Constitution and Union territory status for Ladakh.

Namgyal was elected a councillor of the Ladakh Autonomous Hill Development Council in 2015 and became its chairperson in 2018.

In 2013, Namgyal authored a book on poetry, Nyam-rtsom Gyi Leg-skyes, or A Gift of Poetry.

His wife is a government servant.