News
Business
Movies
Sports
Cricket
Get Ahead
Money Tips
Shopping
Sign in  |  Create a Rediffmail account
Rediff.com  » News » Is there a way forward for India-China in Ladakh?

'The best trust building measure would be to undo what was done in 1954 and reopen the Demchok-Tashigang route on the border for trade as a first step; the next one would be to let the pilgrims visiting Kailash-Manasarovar use this route,' says Claude Arpi.

On March 23, 1954, after three months of tough negotiations, the Indian and Chinese representatives were still far from an agreement on trade between India and Tibet (a month later, it would become the infamous Panchsheel 'accord', which saw India surrendering all its rights in Tibet without getting anything in return, not even an agreed border).

On that day, Ambassador N Raghavan cabled Delhi about the routes in East Ladakh, the Chinese were reluctant to concede Rudok (near the Panggong lake) or Rawang (further east) simply because China was building 'military installations', wrote Raghavan (the Aksai Chin road would be 'discovered' four years later).

Was the fact that China was building this important axis on Indian territory known to the Indian negotiators?

Perhaps not, Indian diplomats were living on their own cloud.

The Indian ambassador observed: "As Ladakh traders [are] already going to Tashigong [the first Tibetan village south of Demchok] besides Rudok, their trade may not suffer if Chinese themselves anxious to develop this trade.

"There is however some risk which only future developments can confirm or remove."

Soon India discovered that China was not interested to keep the trade between India and Tibet alive; further, they wanted to hide from the Ladakhis the development occurring in the area; as a result, the traditional 'silk road' between Ladakh and Western Tibet was closed (and till date, it has not been reopened, though China speaks today of a grandiose Border and Road Initiative).

A month later, on April 24 in the morning, Raghavan informed the foreign secretary about a fight which took place between him and Zhang Hanfu, his Chinese counterpart: "It was royal fight from beginning to end;" the agreement, with its lofty Panshsheel preamble, was however signed in the afternoon; but in the process, the Indian diplomats had discovered that China had a big problem with Ladakh.

It was never publically said.

In Article IV, while India insisted on the inclusion of the words "along the Indus from the Indian border to Shershang - Tashigong - Gartok" at the end of paragraph 7, China virulently objected to this route being included in Agreement; they quoted an oral understanding "they would not like in writing even by implication to have any reference to Ladakh." 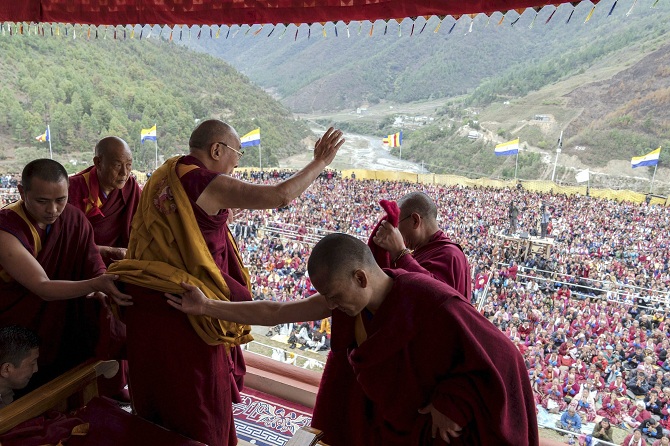 IMAGE: The Dalai Lama during his visit to Arunachal Pradesh in April 2017. His Holiness stopped between Tawang and Bomdila to consecrate the Thupsung Dhargyeling monastery in Dirang and deliver teachings. Photograph: PTI Photo

Why? Because, the mountainous region was for them a disputed area.

Since Ladakh was part of Indian territory and even though this was not in the draft agreement, the route should be mentioned as its omission would be invidious, argued Raghavan, but the Chinese remained adamant.

The Indian Ambassador informed his counterpart that India would be prepared to accept another formula, for example, "customary main route leading to Tashigong along valley of Indus River."

After 'considerable' argument, Zhang agreed but subsequently changed his views, "He now suggests he would consider exchange of letters which will not form part of Agreement concerning routes, including route to Tashigong."

That was at the end of four months of intense talks.

The route has remained closed since then; Ladakh remains for Beijing a disputed area.

One can understand better why, after India announced the abrogation of Article 370 of the Constitution and the creation of a Union territory of Ladakh, China saw red.

Foreign ministry spokesperson Hua Chunying chose to issue two statements, one calling on India and Pakistan to peacefully resolve their disputes through dialogue and second, more damaging for the relations between India and China, objecting to the formation of Ladakh as Union territory, while putting forward China's claims over the area.

"China always opposes India's inclusion of Chinese territory in the western section of the China-India boundary under its administrative jurisdiction," Hua said, adding: "The recent unilateral revision of domestic laws by the Indian side continues to undermine China's territorial sovereignty, which is unacceptable and will not have any effect."

Not only does this type of uncalled for statement have a negative effect on the forthcoming summit between Prime Minister Narendra Modi and President Xi Jinping, but it shows that China still has a problem with the Western Sector of the Sino-Indian boundary.

It is in these circumstances that Dr S Jaishankar, India's foreign minister, paid a two-day visit to China (his trip had been finalised before J&K was bifurcated into two Union territories on August 5 and the unacceptable words of Ms Hua Chunyin).

The Hindustan Times reported before the visit: "Beijing is nevertheless expected to raise its concerns about the situation, especially because its all-weather ally, Pakistan, already sent its foreign minister, Shah Mahmood Qureshi, last week to discuss the issue with Wang."

Apart from finalising the details of President Xi Jinping's forthcoming visit to India in October for a second 'consensus summit' with Prime Minister Modi (the first one was in Wuhan in China in April 2018), the two foreign ministers co-chaired the second meeting of the "High-Level Mechanism on Cultural and People-to-People Exchanges".

It was Dr Jaishankar's first visit as foreign minister to China where he earlier served as India's ambassador; it was also an occasion for the two ministers to discuss bilateral and international issues such as India's serious concern about the trade deficit ($57 billion last year in India's disfavour) for an overall trade touching $100 billion in 2019.

But the ongoing trade war between China and the US is definitively secondary to this basic respect of India's territoriality; Beijing's Ladakh stand needs to be clarified.

Is there a way forward?

The best trust building measure would be to undo what was done in 1954 and reopen this route on the border for trade as a first step; the next one would be to let the pilgrims visiting Kailash-Manasarovar use this route.

Remember the skirmishes at the end of the 1960s in Sikkim!

When the Nathu-La pass was officially reopened to trade in July 2006, it had the effect of 'fixing' the border, thus drastically reducing the tensions in the area.

Considering the 'Nathu-La' effect, reopening the Demchok-Tashigang route could be an excellent confidence building measure between India and China in Ladakh.

For years, the people of Ladakh have also asked for the reopening of the ancient route.

Why can't China allow the devotees wanting to visit Kailash-Manasarovar use the easiest route via Demchok?

But to do so, China will have to drop the disputed territory tag over the area. 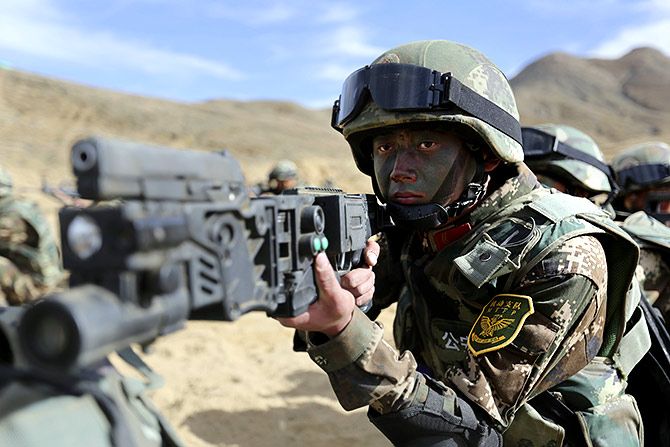 An alternative to Demchok

If China refuses to open Demchok, for whatever reasons, an alternative site would be Dumchele.

Very few in India have heard of Dumchele, a place located east of the Indus river, on the Chinese side of the Line of Actual Control (LOAC) between India and China; it used to be marked as a 'grazing ground' on old maps of the British Raj.

Though Dumchele is one of the 12 places where India and China have a difference of perception on the location of the LOAC, this is not an insurmountable difficulty.

If the political leadership decides so, Dumchele could also become a new Border Personnel Meeting (BPM); presently the meeting points between the Indian and Chinese armies in Ladakh are located at Chushul and Daulat Beg Oldi.

Demchok, the historical land port, could temporarily be set aside in favour of Dumchele which was the main smuggling centre between India and China in Ladakh till 2016, when it was stopped for security reason.

The opening of Demchok or Dumchele would boost the local economy (both sides) and satisfy the local Indian sarpanches... and one day, one can dream of a new route (without crossing a single pass) to Mt Kailash.

It would then become the fastest and easiest access to the holy mountain.

It could be an important step on the path of peace and would show China's sincerity to open its frontiers with its neighbours... build a Border and Road Initiative.

If China is adamant to tag Ladakh as 'disputed', India should start raising the issues faced by of the people of Xinjiang, Tibet and Hong Kong. 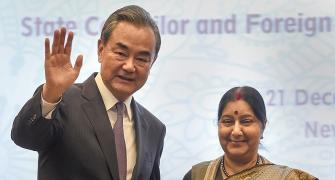