'It is the special status that has kept Kashmir away from India. Article 370 has not led to an emotional and proper integration of Kashmir with India. With special status, what has Kashmir got?'

'All the benefits of democracy will flow to Kashmir now. This has not happened in the last 70 years.' IMAGE: Parliament House in New Delhi was illuminated on August 5, 2019, to mark the passage of the J&K Reorganisation Bill by the Rajya Sabha. Photograph: Arun Sharma / PTI Photo

Well known Pakistan expert Tilak Devasher is member, National Security Advisory Board and a former special secretary in the Cabinet Secretariat and has written books like Pakistan: Courting the Abyss and Pakistan: At the Helm. His latest book is Pakistan: The Balochistan Conundrum.

With the Narendra Modi government scrapping Article 370 and securing the Rajya Sabha's approval for it on Tuesday, there is jubilation in the country but at the same time there are apprehensions too as to what will happen next in the volatile Kashmir valley, and if Pakistan, which has taken a negative stand on the issue, will open the tap of terror further.

The country is celebrating over the scrapping of Article 370, but now there are apprehensions as to what next.

I think a lot of apprehensions are based on lack of information and is unnecessarily hyped up by certain political parties and other interests. Kashmir will become like any other part of India, so are people apprehensive in other parts of India?

Pratap Bhanu Mehta says this decision will potentially see the Kashmirisation of India, do you agree?

People keep playing around with these words. The point is Kashmir is an integral part of India and Kashmiris have as many rights in India as any citizen of India. In the name of special status Kashmir was denied the fruits of Indian democracy. Like Right to Information Act was not applicable there and women could not have property rights if they married an outsider.

Pakistan always considered Kashmir as disputed territory. Now will the word 'disputed' go away from the debate on Kashmir?

What happens to all pacts like Shimla Agreement and Lahore Declaration? Have they gone in cold storage?

Shimla Agreement still remains because it says all issues between India and Pakistan will be decided bilaterally, and it continues to remain.

On the international front America is moving out of Afghanistan and the Taliban looks set to take power in the near future. In this scenario do you think the doing away of Article 370 was the best thing that could happen to India?

I don’t think you can link scrapping Article 370 with Afghanistan because this was part of the BJP's manifesto for a long time. It was not something hidden or sudden. Everyone was aware of it when they voted for the BJP.

But it is about the timing of the decision. The government cancelled Amarnath yatra, USA is all set to move out of Afghanistan and the government sent in additional forces to J&K before tabling the Article 370 bill in Parliament.

The BJP used whatever opportunity they got. It was part of their agenda and you cannot say they did it surreptitiously. The BJP manifesto was open and they have been against Article 370 right from the beginning, from the days of Syama Prasad Mookerjee (founder of Bharatiya Jan Sangh, now BJP). They felt that this was the right time now and they moved in Parliament.

Many mainstream Indian politicians from Kashmir are saying that it was wrong to scrap Article 370 when governor's rule was on in J&K and the state assembly was in suspended animation.

I think once the dust settles down Kashmiris will understand what are the benefits they will get from India and Indian democracy when all laws are extended over there. They will realise how beneficial this move is.

Today there is a lot of emotional reaction to this and anybody who is going to lose the special status will obviously feel upset. Once they realise the benefits, certainly things will settle down.

And anybody who voted for the BJP or did not vote for the BJP knew what the BJP stood for on Article 370. It is perhaps the first time a political party is implementing its manifesto.

Another apprehension is that those who stood by India in Kashmir will flock to separatist ideology post scrapping of Article 370.

I don’t think so. The idea of India is so much stronger and has so much of appeal.

They say it is like India  imposing its imperial will on Kashmiris, they are not being asked what they want but we decide for them.

Not at all, and this is all propaganda. When Maharaja Hari Singh acceded to India in 1947, he acceded because Pakistan had pushed raiders into J&K. They were killing and looting the people of Kashmir.

I mean now, where the scrapping of Article 370 by Indian Parliament is like imposing our rule on Kashmiris.

It is the special status that has kept Kashmir away from India. Article 370 has not led to an emotional and proper integration of Kashmir with India. With special status, what has Kashmir got?

All the benefits of democracy will flow to Kashmir now. This has not happened in the last 70 years.

Pakistani newspapers are playing the communal card and saying this move is like the Hinduisation of Kashmir.

They will raise all kind of fears like people rushing to buy property in Kashmir. You can only buy property when some Kashmiri wants to sell his property. If they don’t want to sell their property you cannot force them to do so.

And look at this, if a Kashmiri lady marries a non-Kashmiri she and her succeeding generations lose all property rights in Kashmir. Is that fair? Half the population of Kashmir you have disenfranchised for the last 70 years and divested them of any property rights. How is that fair?

Moreover, Home Minister Amit Shah has clarified that Union territory status will be only for some time and when things settle down Jammu and Kashmir will become a state once again. 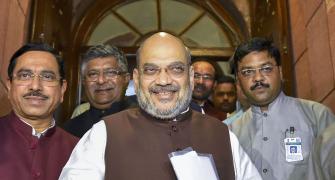 Timing was just right for Modi sarkar to scrap Art 370