Maha seeks clarity from railways on train fares for migrants

The Maharashtra government has sought clarity from the Railways over whether it is bearing 85 per cent of the transport cost of migrant workers heading home amid the lockdown, the state home minister said on Wednesday. 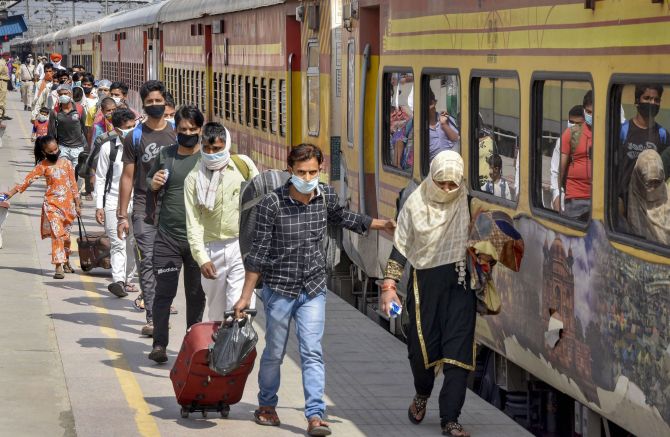 IMAGE: Migrants board a special train to reach Lucknow, during the ongoing COVID-19 lockdown, in Jalandhar, on Wednesday. Photograph: PTI Photo

These workers do not have jobs and the Railways should not charge train fare from them, Deshmukh said in a video message.

The Bharatiya Janata Party on Monday said the Railways has subsidised 85 per cent of ticket fare for special trains being run to transport migrant workers and the state governments have to pay the remaining 15 per cent.

"On behalf of the Maharashtra government, I am seeking clarity from the Indian Railways whether it is really bearing 85 per cent cost of the train ticket. No official order has been received from the railways so far," Deshmukh said.

Everybody knows that these migrant labourers have no jobs since last 40 days and they are desperate to return home, he pointed out.

"The railways should do away with charging the ticket cost from the migrant labourers," he said.

So far, nearly 36,000 migrant labourers have left from Maharashtra for their native places, an official earlier said.

Congress president Sonia Gandhi on Monday said her party's state units will bear the cost of rail travel of needy migrant labourers stranded at their workplaces due to the coronavirus-induced lockdown and seeking to return home.

She also accused the central government and the Railways of completely ignoring the demands made by the Congress for ensuring the safe and free travel of migrant workers and labourers to their homes.

Rebutting the Congress' criticism, the BJP said on Monday that the Railways has subsidised 85 per cent of ticket fare for special trains being run for migrant workers and the state governments have to pay the remaining 15 per cent.

The Shiv Sena on Wednesday criticised states which have insisted on coronavirus testing of migrant workers before taking them back, terming it is a 'cruel and inhuman' stand.

An editorial in Shiv Sena mouthpiece Saamana also criticised the BJP-led Uttar Pradesh government, saying it brought back students from Kota in Rajasthan without any testing 'since they were rich', while train fares were charged from the poor.

'Till yesterday, these workers were the vote bank of political parties and leaders, as if Mumbai and Maharashtra have been built on the hard work of these migrant workers. These people are running away in times of crisis and their political mentors have turned them away," the Sena said.

It alleged thatthe Uttar Pradesh government made a 'u-turn' on taking back migrant workers and put stringent conditions for them, including that they be tested for coronavirus before return.

'This stand of states is cruel and against humanity,' the Sena said

It also accused the Uttar Pradesh government of 'rich-poor bias'.

'Hundreds of buses were sent to Kota to bring students back to Uttar Pradesh without any testing since they were rich. For poor, rail ticket fares were charged,' the Marathi daily said.

The Sena said migrant labourers stuck in different parts of Maharashtra have to face a new ordeal now.

Maharashtra looked after them well but they want to go home while their home state is not ready to take them.

This was done on humanitarian grounds, the Sena said.

'Migrant workers are not cats and dogs. But their native states are not showing humanity,' it said.

The Sena said Union minister Nitin Gadkari has rightly pointed out that 'migrant labourers may run away from Maharashtra but what will they eat in their home state'. 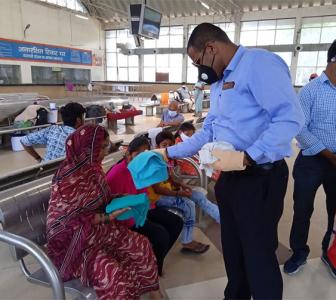