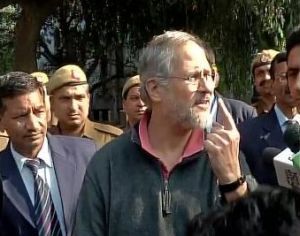 The submissions were made before the court of Additional Sessions Judge Sanjeev Jain during the hearing on Tomar's bail plea.

Advocate Tarunvir Singh Khehar told the court he has been appointed as special public prosecutor in the case by the LG.

“I have been appointed as special public prosecutor in the case by the LG of Delhi to represent police in the case,” Singh informed the judge.

As the hearing on Tomar's bail plea commenced, senior advocate Ramesh Gupta, appearing for the accused, objected to Khehar's appearance in the case saying they neither know him nor has he filed any 'vakalatnama' (power to an advocate to argue/plead in the case).

The court then asked Khehar to file vakalatnama and place on record the authorisation letter of LG showcasing his appointment.

To this, Khehar submitted his 'vakalatnama' in the case and said he has the copy of authority letter of LG but sought time to file it later.

Gupta then requested the court that Khehar's statements be taken on record that he has been appointed by LG to represent police in the case.

"Vakalatnama has been filed by advocate Tarunvir Singh Khehar and he has made a statement at the bar that he has been appointed by Lieutenant Governor of Delhi to represent Delhi police/state but he does not possess the copy at present. Let him file the copy on next date of hearing," the court said in its order.

Tomar, 49, was arrested by Delhi police following an FIR registered on the basis of a complaint lodged by BCD for allegedly forging documents, including educational degrees, to enroll as an advocate.

An FIR was registered against Tomar on June 8 at Hauz Khas police station and he was booked for alleged offences of cheating, forgery, using forged documents as genuine, forgery with intent to cheat and criminal conspiracy.