The Samyukta Kisan Morcha (SKM) has called for a protest outside the offices of district magistrates and divisional commissioners across the country on Monday over two SUVs allegedly running over protesters in Uttar Pradesh's Lakhimpur Kheri, farmer leaders Yogendra Yadav and Darshan Pal Singh said on Sunday. They also demanded a probe into the 'gory' incident by a Supreme Court judge and not by the Uttar Pradesh administration.

Eight people were killed on Sunday as violence erupted during a farmers' protest, claiming the lives of both farmers and Bharatiya Janata Party workers ahead of a visit to Lakhimpur by Uttar Pradesh Deputy Chief Minister Keshav Prasad Maurya, officials said.

'To express our agitation against Sunday's incident, the SKM calls for a protest outside the offices of district magistrates and divisional commissioners across the country between 10 am and 1 pm,' Singh said.

The farmer leaders alleged that Union Minister of State for Home Ajay Kumar Mishra's son was travelling in one of the sports utility vehicles (SUVs) involved in the incident.

'We demand that Union Minister of State for Home and Kheri MP Ajay Kumar Mishra be immediately dismissed from his post. A case under section 302 (punishment for murder) of the Indian Penal Code should be registered against the minister's son and the other goons,' Singh and Yadav said at a virtual press conference.

The SKM, an umbrella body of over 40 farm unions, is spearheading a protest at Delhi's borders against three agriculture laws of the Centre.

The SKM claimed that at least four farmers were killed in the incident and appealed to the protesters to maintain calm.

'The Samyukta Kisan Morcha is able to confirm the deaths of four farmers at this point of time -- Lovepreet Singh (20), Daljeet Singh (35), Nachattar Singh (60) and Gurvinder Singh (19). There are around 12 to 15 persons injured and hospitalised. The

'SKM pays respectful homage to all these martyrs,' it said in a statement after the press conference.

Yadav and Singh alleged that BJP MP Mishra issued a 'brazen threat' against the protesting farmers only a few days ago.

They pointed out that the 'gory episode' targeting farmers took place just a few days after the threat issued by the Union minister.

The violence broke out after the two SUVs allegedly ran over a group of anti-farm law protesters who were demonstrating against Maurya's visit at the Tikonia-Banbirpur road on Sunday.

The two vehicles were set ablaze by the angry farmers, reports said. They also allegedly thrashed some passengers of the vehicles.

'It is confirmed that Ashish Mishra Teni (son of Union Minister of State for Home Affairs Ajay Mishra Teni) came with three vehicles around the time when farmers were dispersing from their protest site at the helipad, mowed down farmers and towards the end, also attacked SKM leader Tajinder Singh Virk directly by trying to run a vehicle over him,' the SKM alleged in its statement.

The farmers' body also alleged that gunshots were fired on the spot where the violence took place.

'There were shots fired and one of the deaths was due to the shooting by Ashish Mishra Teni (minister's son) and his team,' it said.

Yadav claimed such incidents are a 'conspiracy' to 'break' the movement.

'It is a conspiracy to break the movement. We will keep protesting peacefully. We will soon hold a meeting to chalk out further strategy on the development,' he said.

'Reacting to the Haryana chief minister's statements abetting violence against peacefully protesting farmers, Samyukta Kisan Morcha demands an immediate apology from him and a resignation from the constitutional post that he holds,' it said.

Khattar talked about 'tit for tat' during a meeting of the BJP's Kisan Morcha in Chandigarh on Sunday when he told the gathering to form groups of 500 to 1,000 and be prepared to even go to jail, with the Opposition and farm unions alleging that he was asking the supporters of the saffron party to attack the anti-farm law protesters. 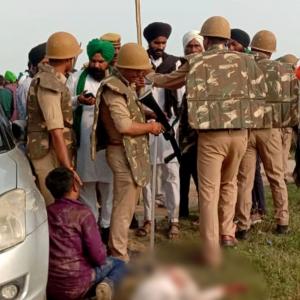 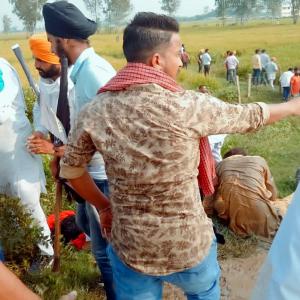