Eight people were killed as violence erupted in Lakhimpur Kheri during a farmers' protest over Uttar Pradesh Deputy Chief Minister Keshav Prasad Maurya's visit, according to an official. 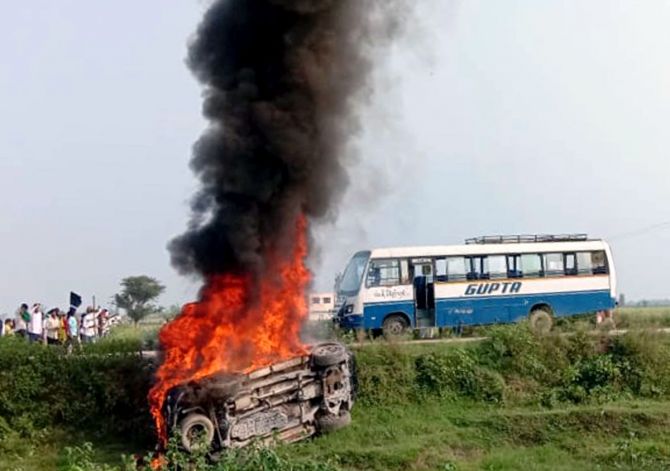 IMAGE: A vehicle set ablaze as violence broke out after protesting farmers were allegedly run over by an SUV in the convoy of a Union minister, in Lakhimpur Kheri on Sunday. Photograph: Naeem Ansari/ANI Photo

Two SUVs were set on fire by angry farmers, reports said, after they hit a group of protesters.

Four of the dead were travelling in the vehicles, an Uttar Pradesh government official in Lucknow said.

The farmers had assembled there to oppose Maurya's visit to Banbirpur, the native village of Union Minister of State for Home and MP Ajay Kumar Mishra.

Maurya's visit to Banbirpur village was cancelled in view of the violence.

The violence broke out after two SUVs allegedly ran over a group of anti-farm law protesters, who were demonstrating at the Tikonia-Banbirpur road.

Farmers alleged that the Union minister's son was in one of the vehicles, a charge denied by Mishra.

Mishra told PTI over the phone that three BJP workers and a driver were beaten to death by 'some elements' in the protesting farmers after a car in which they were travelling turned turtle following pelting of stones.

Mishra said neither his son nor he was present at the site when the incident occurred. 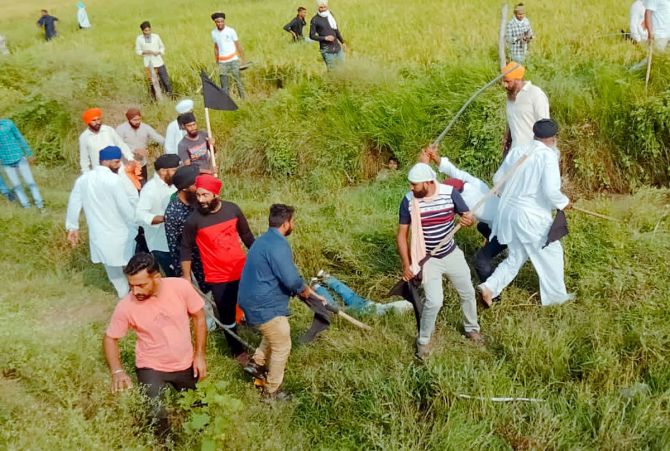 He said the incident happened when some Bharatiya Janata Party workers were going to receive Maurya, who had come to attend an event at Lakhimpur Kheri.

Earlier a UP government official in Lucknow said six people, including two farmers, were killed.

"A cavalcade was going, which was shown black flags (by farmers). The cavalcade was moving as per routine. When two to three vehicles of the cavalcade were left, a vehicle of it started turning upside down, and two farmers came under it, and they died," the official added.

"After this, the vehicle which was behind it was damaged. Passengers and the drivers were brought out of the vehicles and they were beaten to death," the UP government official added.

Additional Director General of Police (Law and Order) Prashant Kumar has reached the spot and the situation is now under control, he added.

Meanwhile, the incident drew a sharp reaction from the opposition parties and farmer bodies.

'Had a talk with Tejinder Singh Virk ji, a farmer leader who was seriously injured in the incident,' said Akhilesh, blaming BJP workers for the incident.

'In view of his critical condition, the government should immediately provide him with the best treatment. There is only one demand, the chief minister should resign,' he said.

In an another tweet, he said the 'trampling of farmers by the son of the Union Minister of State for Home' is an inhuman and cruel act.

'UP will not tolerate the oppression of the BJP. If this situation continues, the BJP people will not be able to move in a vehicle, nor will they be able to de-board it,' he said.

Akhilesh Yadav is likely to visit Lakhimpur Kheri on Monday.

Rashtriya Lok Dal chief Jayant Chaudhary in a Hindi tweet alleged that the cavalcade of the Union minister ran over the protesting farmers.

When the heinous act of suppressing the protest is 'hatched' by the minister, who could be safe, he said.

The Bharatiya Kisan Union (BKU) also alleged that the son of the Union minister ran over the protesting farmers.

'Three farmers have died. Tejendra Singh Virk has been injured. Rakesh Tikait is leaving from Ghazipur,' the BKU said.

Meanwhile, Tikait in a video message on Twitter said, "Farmers in Lakhimpur were returning after the protest when they were attacked.

"Some of them were run over, while the fire was also opened on them. According to information we have so far, several people have died in the incident."

The president of the Rashtriya Kisan Manch, Shekhar Dixit, termed the incident 'shameful'.

He demanded that the Union minister tender his resignation immediately.

Ajay Mishra and his son must be arrested immediately, he demanded. 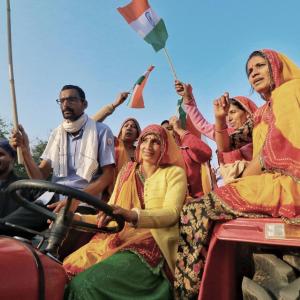