The Union minister of state for home said neither his son nor he was present at the site when the incident occurred. 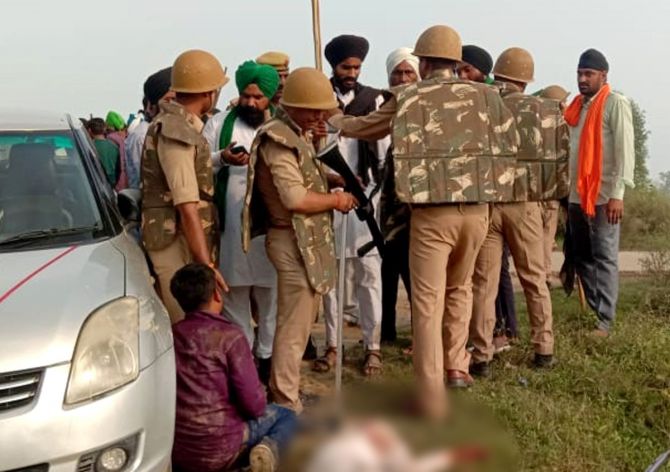 IMAGE: Security personnel at the spot after violence broke out after farmers agitating were allegedly run over by a vehicle, in Lakhimpur Kheri on Sunday. Photograph: Naeem Ansari/ANI Photo

Union Minister Ajay Mishra on Sunday refuted allegations that his son Ashish Mishra was involved in the incident at Lakhimpur Kheri in Uttar Pradesh in which farmers died and said that three Bharatiya Janata Party workers and a driver were beaten to death by 'some elements' present among the protesting farmers there.

He also told PTI that the protesters first pelted stones on the vehicles of BJP workers due to which his driver lost control of the vehicle leading to the accident.

Some opposition leaders and farmer unions have alleged that the protesting farmers were run over by Mishra's son.

Mishra said his son was not present at the spot and he has photographic and video evidence to prove it.

'My son was present at the venue of the (UP deputy chief minister's) event and thousands of people, officers of the administration and police were present there,' he said.

He said the incident happened when some BJP workers were going to receive UP Deputy Chief Minister Keshav Prasad Maurya who had come to attend an event at Lakhimpur Kheri.

'Some elements in farmers, who were protesting, showed black flags and pelted stones on the car which turned turtle. Two farmers came under the car and died.

'Three BJP workers and the driver of the car were beaten to death by some people present there,' he said.

'Had he (Ashish) been in that car, he would not have been alive today,' the minister said, adding two vehicles were torched and their driver was killed by the mob.

Asked if there were any intelligence inputs about the incident, he said that there was information about peaceful protests, and termed the incident as a 'betrayal'.

There were anti-social elements in the farmers' agitation, who made efforts to make the agitation violent, he said.

'The farmers organisation must take this incident very seriously, as anarchists are trying to create instability in the country. We have to be alert, and identify them,' he said.

He also claimed that extremist organisations like the Babbar Khalsa have infiltrated into the farmers' protest.

'Over 10 party workers are seriously injured and have been hospitalised,' he said.

The minister's son Ashish Mishra also said that he was not present at the site.

'Our cars were torched and workers were attacked. So many of our workers are still missing. Would I be standing here if I had been in one of the cars,' he told mediapersons.

Eight people were killed in the violence on Sunday during a protest by farmers who are agitating against the Centre's three agri laws. 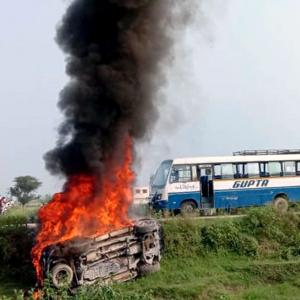