Delhi Lieutenant Governor Anil Baijal on Tuesday met a delegation of protesters from Shaheen Bagh and appealed to them to call off their agitation as it has been causing inconvenience to schoolchildren, patients and general public. 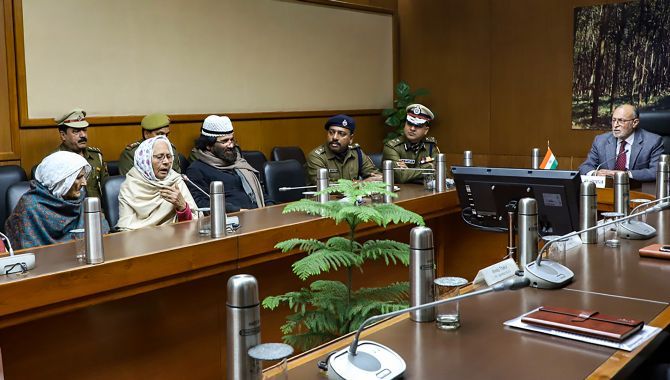 IMAGE: Delhi Lt Governor Anil Baijal during a meeting with representatives of the Shaheen Bagh protesters regarding staging their agitation against CAA and NRC without blocking the road on Tuesday. Photograph: PTI Photo

The eight-member delegation submitted a memorandum of their demands, including withdrawal of the Citizenship (Amendment) Act, to the L-G, an official said.

Thousands of people, including women and children, have been protesting for over a month at Shaheen Bagh and nearby Jamia Millia Islamia against the CAA and the National Register of Citizens (NRC).

'Met the delegation of protesters from Shaheen Bagh. Assured them to convey their concerns to appropriate authorities. Appealed to call off their agitation in view of continued inconvenience to school children, patients, daily commuters, local residents, etc due to blockade of road,' Baijal tweeted.

In another tweet, the L-G said, 'I once again request all to maintain peace and order.'

According to the L-G office, the delegation assured Baijal that they would convey his message to other protesters at Shaheen Bagh.

"The L-G also directed the police officers concerned to take all steps as per law to ensure peace and harmony in the area," officials said.

Earlier in the day, the National Commission for Protection of Child Rights (NCPCR) asked authorities to identify and arrange counselling for children seen at protests against the CAA at Shaheen Bagh.

According to the CAA, members of Hindu, Sikh, Buddhist, Jain, Parsi and Christian communities who have come from Pakistan, Bangladesh and Afghanistan till December 31, 2014 to escape religious persecution there will not be treated as illegal immigrants but given Indian citizenship. It does not include Muslims.

Those opposing the CAA have contend that it discriminates on the basis of religion and violates the Constitution.

They also allege that the CAA along with the NRC is intended to target the Muslim community in India.

However, the central government has dismissed the allegations, maintaining that the law is intended to give citizenship to the persecuted people from the three neighbouring countries and not to take away citizenship from anyone.