Delhi Chief Minister Arvind Kejriwal on Monday demanded a complete rollback of the three contentious central farm laws as he attended a protest by the Punjab unit of Aam Aadmi Party at the historic Jantar Mantar in New Delhi. 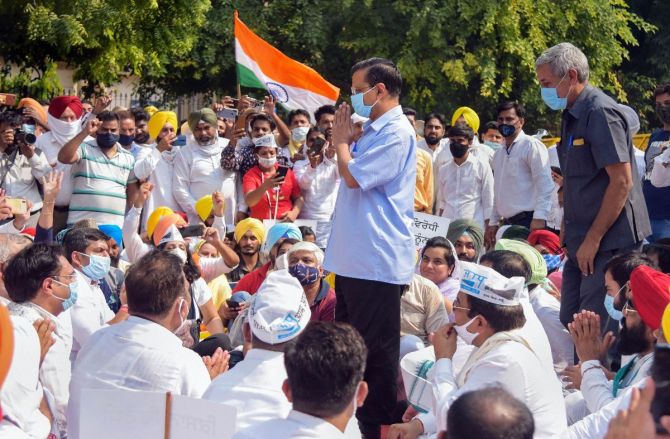 The Delhi Police later said they detained AAP MP Bhagwant Mann and over a hundred protesting workers after 'they started getting agitated'.

Addressing his party workers from Punjab at the protest, Kejriwal said the AAP has a very clear stance on the farm laws.

"We want a complete rollback of the three laws. It is non-negotiable," he asserted.

"Second, a law on MSP (minimum support price) must be brought in the country. Bring a new law to guarantee 100 per cent MSP. The whole of Delhi is standing with farmers in this fight and as Delhi chief minister, I support you in this protest."

Kejriwal said some parties are indulging in politics over the contentious farm laws.

"When the bill was being made a leader of the national party was present in the committee and who congratulated the BJP for making the law, and made sure that the bill got passed.

"When it was passed, they are protesting. Are people stupid?" Kejriwal said without naming anyone.

He also claimed the BJP promised to implement the Swaminathan Commission report but is now doing exact opposite of what was recommended in it.

"When they came asking for votes, they said they will implement the Swaminathan report, but after winning what did they do? They are removing the MSP," he said.

"When our government was formed in Delhi, government schools and hospitals were in a bad shape. So what did we do? We did not shut them, we improved them. The BJP has betrayed the farmers of this country," he said.

Apart from Mann, Kejriwal was joined by senior party leaders including Sanjay Singh and other MLAs.

After the chief minister left, police said they detained Mann along with 136 Punjab AAP leaders and volunteers.

Police said no permission was granted to them for holding the protest as agitations have not been allowed as per the guidelines of the DDMA (Department Of Delhi Disaster Management Authority) in view of the coronavirus.

A senior police official said they allowed the protest as long as it was peaceful 'but then they started getting agitated so we detained them'.

The farmers have expressed apprehension that the Centre's farm laws would pave the way for dismantling of the minimum support price system, leaving them at the 'mercy' of big corporates. 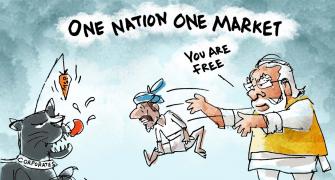 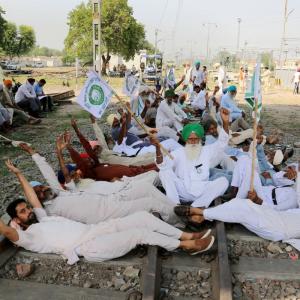