'Like one-one drop of water fills earthen pots and one-one brick helps to construct a house, donation of Rs 1 to my campaign fund will help me fight to take the voices of marginalised and exploited people to Parliament.'
M I Khan reports from Patna. 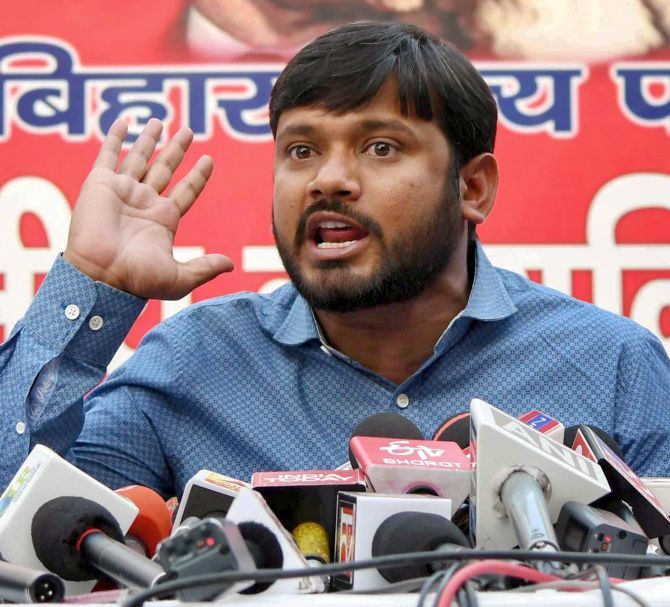 In a first of its kind experiment in Bihar, former Jawaharlal Nehru University students union president Kanhaiya Kumar, the Communist Party of India candidate from Begusarai in Bihar, has collected Rs 40 lakh (Rs 4 million) in crowdfunding in just 40 hours.

"So far Rs 40 lakh has been collected by crowdfunding in just 40 hours," CPI leader Sushil Kumar, who is close to Kanhaiya, told this correspondent.

'In a country where a farmer commits suicide every 30 minutes, where unemployment is casting its darkest shadow in 45 years and the unemployed are deluded into a constructed binary of Hindu-Muslim conflict, it is now incumbent upon the common people to rise up and save democracy,' Kanhaiya said in his crowdfunding appeal.

'Like one-one drop of water fills earthen pots and one-one brick helps to construct a house, donation of Rs 1 to my campaign fund will help me fight to take the voices of marginalised and exploited people to Parliament,' Kanhaiya said.

Kanhaiya Kumar is the Left parties's joint candidate to take on Union Minister and Bharatiya Janata Party leader Giriraj Singh in Begusarai, a constituency with a sizeable population of the land-owning powerful Bhumihar upper caste.

Both Giriraj Singh and Kanhaiya are Bhumihars, but with a difference. Kanhaiya hails from a poor family, his mother is an anganwadi worker in his native village Bihat in Begusarai.

Gujarat Dalit leader Jignesh Mewani, who arrived in Begusarai to meet Kanhaiya, says Hardik Patel and he will campaign for Kanhaiya. Dozens of activists have already joined Kanhaiya in his election campaign.

Besides, actress Shabana Azmi and her husband Javed Akhtar, the celebrated writer and poet, are likely to campaign for Kanhaiya in Begusarai.

The Rashtriya Janata Dal-led Mahagathbandan, which will also contest the Begusarai seat, has not named its candidate yet.