Trinamool Congress supremo Mamata Banerjee on Monday asserted that women are safe in West Bengal but not in Bharatiya Janata Party-ruled states like Gujarat and Uttar Pradesh, while claiming that a day will come when the country will be named after Prime Minister Narendra Modi. 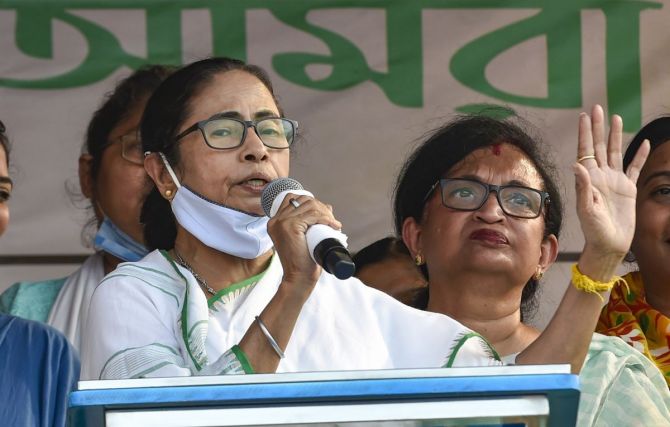 Taking a jibe at Modi for alleging in a rally in Kolkata on Sunday that women are unsafe in West Bengal, the chief minister said that had there been no safety in the state, women would not have been able to move freely even at night.

Instead of "spreading lies and canards" against the TMC government in West Bengal, he should focus on BJP-ruled states such as Gujarat and Uttar Pradesh where, according to media reports, crimes against women are rampant, she said at a rally organised on the occasion of the International Women's Day.

"Media reports say that there have been two murders and four rapes on an average daily in Gujarat in the last two years.... Ahmedabad (the largest city in Gujarat) and Modi's favourite UP are at the top of the list of incidents of rape in the country," Banerjee said.

Modi and Union Home Minister Amit Shah should shift focus on these states, she said.

"Our women work here (in Bengal). Had women been unsafe here, they wouldn't have been able to move around freely even late at night. We do not tolerate crimes against women," she said.

Taking a dig at the PM over the inclusion of his photo in COVID-19 vaccination certificates, Banerjee claimed that a day will come when the country will be named after Narendra Modi.

"The prime minister has named a stadium after him. He has put his photographs on COVID-19 vaccination certificates. He has turned the COVID vaccine to Modi vaccine. A day will come when the country will be named after him," she said.

Referring to the steep hike in the prices of fuel, the TMC boss said that her government is giving free ration to people and if Modi sincerely wants to do something for the poor, he must provide LPG cylinders without charging anything.

The chief minister described Modi's rally held in the city's Brigade Parade Ground on Sunday as "B-grade", claiming that the turnout of people was not good there.

"Yesterday, they held a rally in Brigade. It was actually a B-grade rally. You cannot have everything with money. The number of people we have in our rally today, there was not even half of that yesterday (in the BJP's rally)," she said.

The TMC supremo was addressing a gathering after leading "Didir Sathe Amra" (We are with Didi) rally in Kolkata. Banerjee asserted that she will return to power for the third consecutive time in Bengal.

"The fight is between me and the BJP in all 294 seats. They have the machinery, the money, the goons, and I do not have anything. What I have is the support of 100 per cent of the people of the state," she said.

She also urged the people of the state to greet callers saying "Jai Bangla" (hail Bengal) instead of "hello" whenever they get a call on their phone.

The TMC's "Jai Bangla" slogan has stirred a controversy as the BJP described it as one used during the Bangladesh Liberation War in 1971.

Banerjee had earlier clarified that the "Jai Bangla" slogan was found in poet Kaji Nazrul Islams writings well before the Bangladesh Liberation War.