'Elements like the LeT may see the fight against the coronavirus as an opportunity of a lifetime,' warns Colonel Anil A Athale (retd). 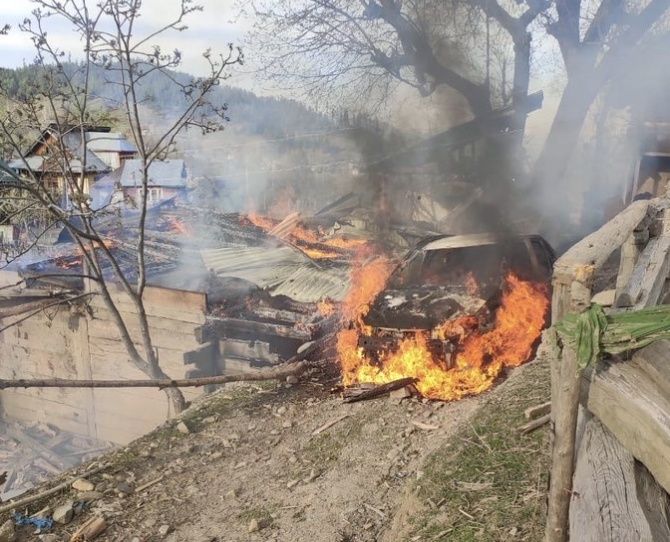 IMAGE: A car on fire after the Pakistan army shelled a village in Kupwara in the Kashmir valley. Photograph: Umar Ganie for Rediff.com

Terrorist infiltration attempts in Kashmir and the Pakistan army's firing at the ceasefire line in rhe Union territory of Jammu and Kashmir has been going on while the world fights a grim battle of survival against a virus.

Many well-meaning Indians have attributed Pakistani enmity towards India to the Kashmir issue.

These Indians will do well to ponder over the fact that when Lashkar e Tayiba terrorists bombed suburban trains in Mumbai on July 11, 2006 or launched an attack in Mumbai on November 26, 2008, there was no proximate reason linked to Kashmir.

General Pervez Musharraf, Pakistan's former military ruler, is on record saying that even if the Kashmir issue is resolved, India-Pakistan relations will not improve. Musharraf was telling the unvarnished truth.

The Pakistani motivation -- at least of some Pakistanis -- is Gazwa e Hind, conquest of India, and not just 'liberation' of Kashmir.

The LeT is a virtual arm of the Pakistani military. Many conservative elements in Pakistan believe it is their religious duty to work for Gazwa e Hind.

In the light of this persistent motivation, it is not unlikely that elements like the LeT may see the fight against the coronavirus as an opportunity of a lifetime.

India has no option, but to be ready to face the threat.

Like suicide bombers, we may see suicide virus spreaders.

Let us not forget that al-Qaeda had similar plans via a Pakistani origin scientist based in the United States. Thanks to timely American action, she is now locked up for 99 years in prison.

India has to be ready and alert to thwart such designs.

With the abrogation of Article 370 and the government's firm grip over Kashmir, the LeT and such terror entities are desperate for action.

While the country fights the coronavirus, the armed forces have to be ready to face this additional threat.

Colonel Anil A Athale (retd) is a military hisotian.