'The sooner Pakistan and India face these geopolitical realities, the better it will be for their own security and prosperity,' observes Ambassador M K Bhadrakumar. IMAGE: Security personnel stand guard on a deserted street in Srinagar during the strict curfew imposed on the first anniversary of the revocation of Article 370, August 4, 2020. Photograph: Umar Ganie for Rediff.com

India will be keenly watching the outcome of the Pakistani brain wave 'to call a meeting of the Islamic countries that are ready to stand with us on the issue of Kashmir and support the oppressed Kashmiris', as Pakistan Foreign Minister Shah Mehmood Qureshi stated (external link) in Islamabad on August 4, on the eve of the first anniversary of New Delhi's decision to fully integrate the former state of Jammu and Kashmir by amending Article 370 of the country's Constitution that had provided for special status to the region as part of the Indian Union.

In retrospect, August 5 passed eventfully within India but in an unexpected way - a triumphalist moment marking the commencement of the construction of a Hindu temple in Ayodhya.

The ceremony in Ayodhya relegated J&K to the back burner even as India's Opposition -- and the media -- was frog-marched to provide the chorus for the joyful occasion of temple construction.

As a columnist in the South China Morning Post noted (external link) with biting sarcasm, 'Much water has flowed down the Sarayu river -- on whose banks Ayodhya stands -- between the ending of the mosque and the beginning of the "golden chapter".'

'Opposition parties, which once saw the demolition as independent India's most shameful moment, now prefer silence or seek to join in the festivities over what is to replace the debris.'

'The Congress, a sorry shadow of its former self and unsure where it fits in this "golden chapter", has even been trying to claim credit for the temple to out-Ram the BJP. The media, which then couldn't hide its horror at the razing of the mosque, now can't hide its relief at the raising of the temple...'

The point is, August 5 from now on is guaranteed to be a joyful day for the Indian hinterland to celebrate.

Delhi also draws satisfaction that the international community did not raise dust on the anniversary day -- not even the UNHRC -- apart from a symbolic attempt by China on behalf of its 'Iron Brother' at the UN Security Council.

Suffice to say, Qureshi's threat to Saudi Arabia stems from the frustration that it could do nothing more the renaming of Islamabad's Kashmir Highway as the 'Road to Srinagar" and the unveiling of a 'new map of Pakistan'.

Meanwhile, Qureshi didn't seem to factor in that the Organisation of Islamic Conference is the diplomatic platform on which the Custodian of the Two Holy Mosques, Saudi King Salman exercises leadership of the Ummah.

Other than oil, it is that title which prompts the world community to take Saudi Arabia seriously.

And, that hallowed title dating back to Saladin was adopted by the Ottoman Sultan Selim I after defeating the Mamluks and gaining control of Mecca and Medina in 1517, and was used by all subsequent Ottoman Caliph sultans until Mehmed VI (1861-1926), the last.

By the way, King Salman is only the third Saudi monarch to take up the title.

Turkey's 'neo-Ottomanism' under President Recep Erdogan dreams about the recovery of the lost historical heritage, which was prised away from it in a blatant conspiracy hatched by imperial Britain when it stirred up the so-called Arab Revolt.

Ankara has refrained from making any statement on Kashmir on August 5. (Presumably, Delhi's 'quiet diplomacy' is working.) Having said that, Erdogan may not be found wanting if Imran Khan indeed moves to challenge the Saudi misuse of the OIC as a vehicle of Saudi foreign policies.

Any Pakistani initiative to gather a credible number of countries to create a non-Saudi OIC narrative is a non-starter.

Qureshi may have ended up inflicting a wound on the Saudi-Pakistan relationship.

This is not to be compared to Pakistan's reluctance to fight in the Saudi-led war in Yemen.

This is about challenging Saudi leadership of the Ummah -- and that too, in such unseemly hurry on the fourth day of the 84-year-old King Salman's return from hospital after surgery (external link).

The Pakistan-Saudi relationship has been in some drift lately.

There are tell-tale signs: Pakistan reportedly scrambled to pay back a hefty Saudi loan even ahead of time; Saudis have not cared to renew the deal for supplying oil (external link) to Pakistan under deferred payments; again, nothing seems to have moved on the grand idea of $10 billion Saudi investments (external link) in the Pakistani economy, either. 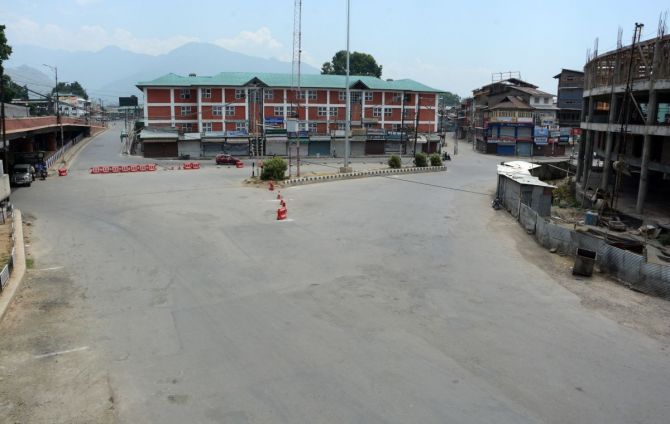 IMAGE: A deserted view of a Srinagar street during the strict curfew imposed on the first anniversary of revocation of Article 370, August 4, 2020. Photograph: Umar Ganie for Rediff.com

Therefore, all factors taken into consideration, wise and prudent statecraft lies in Islamabad focusing single-mindedly on the Afghan problem at this crucial juncture rather than frittering away its limited diplomatic and political capital on the Kashmir issue.

That is also what the international community expects from Pakistan, as the timing of the phone calls to the Indian and Pakistani ministers (here (external link) and here (external link)) by US Secretary of State Mike Pompeo last week would suggest.

Washington's priority lies in somehow kickstarting the intra-Afghan dialogue (external link) and taking some political mileage out of it back home during Trump's campaign in the November election.

Washington expects Delhi not to act as 'spoiler' while it counts on Islamabad to be a key facilitator of the Afghan peace process.

The bottom line is that despite the hype by some Pakistani (and Indian) analysts, there is no shred of evidence to suggest that the developments in eastern Ladakh augur China's entry into the Kashmir issue.

That stand-off stemmed almost entirely out of the idiocies in Indian policies -- principally, its death dance with the Quad and its gravitation toward the US-led 'Indo-Pacific strategy' and the unwarranted move to insert Aksai Chin into its integration plan for J&K under the mistaken notion that Trump would scare off Beijing.

On August 5, Beijing restated its 'consistent and clear' position on Kashmir when its foreign ministry spokesman Ambassador Wang Wenbin said:

'Second, any unilateral change to the status quo in the Kashmir region is illegal and invalid.'

'Third, the Kashmir region issue should be properly and peacefully resolved through dialogue and consultation between the parties concerned.'

'Pakistan and India are neighbours that cannot be moved away. Harmony between the two countries serves the fundamental interests of both sides and the common aspiration of the international community.'

'China sincerely hopes that the two sides can properly handle differences through dialogue, improve relations and jointly safeguard peace, stability and development of the two countries and the region.'

Simply put, much as Beijing cannot accept the Indian claim to Aksai Chin and considers Delhi's recent assertions to be 'illegal and invalid', it continues to remain rooted in the belief that the Kashmir problem as such is a bilateral issue between India and Pakistan.

Unlike the Americans who keep inserting the 'wishes of the Kashmiri people' as a template, Beijing unequivocally frames its position that Kashmir is an India-Pakistan bilateral issue.

Ambassador Wang pointedly expressed China's goodwill toward both its neighbours by urging them to solve the issue bilaterally through dialogue and peaceful negotiations.

Put differently, despite the raucous Indian claim on Aksai Chin lately, the Chinese stance on the Kashmir problem has not changed since early 1994 when then Chinese foreign minister Qian Qichen conveyed to his Indian counterpart the late Dinesh Singh at a meeting in Tehran Beijing's stance on the Kashmir issue in the post-Cold War setting on exactly the same lines as Ambassador Wang did.

This may disappoint hardliners in Pakistan (and India), but facts are facts.

The sooner Pakistan and India face these geopolitical realities, the better it will be for their own security and prosperity.