On Hindi Day, Shah pitches for a common language to 'unify' India

The Union home minister said Hindi should reach every individual and every home in the country. 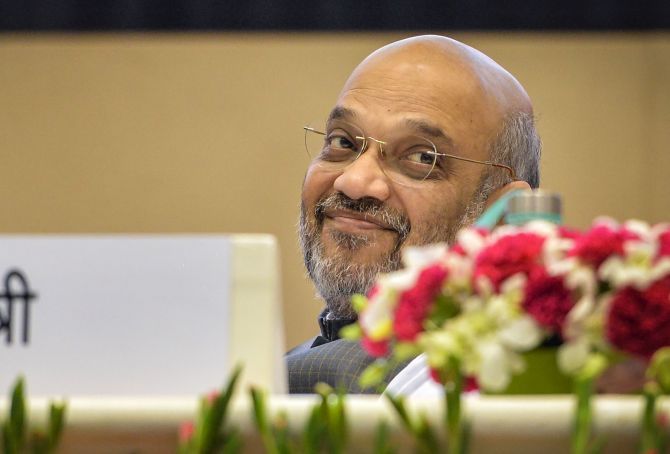 Union Home Minister Amit Shah on Saturday pitched for a common language for the country and said as Hindi is spoken the most, it can unite the whole country.

The home minister also asked everyone to use their native languages as much as possible, but said efforts will be made to expand Hindi's reach to different parts of the country.

Shah said that today, if any language which can unite the country, it is Hindi that is spoken the most.

‘I want to appeal to people to promote their native languages but also use Hindi to make the dream of Bapu (Mahatma Gandhi) and Sardar (Vallabhbhai) Patel of one language come true,’ he tweeted.

According to the Official Languages Act, 1963, Hindi and English are the official languages for the Union government and Parliament.

A total of 22 languages of the country are recognised under the Eight Schedule of the Constitution.

Later, speaking at a 'Hindi Divas' function, Shah said even Mahatma Gandhi and Sardar Patel, who forged a united India, appealed to people to accept Hindi as the official language.

Shah said while diversity in languages is the strength of India, a national language is needed so that foreign languages and cultures do not overpower the country's own.

He remembered Acharya Vinoba Bhave's love for Hindi and Gandhi's assertion that a nation is mute without its national language.

"Our power to express our culture will die in the absence of our national language," he said.

Shah, however, asserted that the growth of Hindi will never be at the cost of any other language and made it clear that Hindi is the language of co-existence.

Shah said there was a unanimous consensus for Hindi as an official language in the Constituent Assembly, in spite of the Assembly's sheer diversity.

He said this decision was an important factor in ensuring cultural unity of India.

The home minister noted the linguistic richness of India and said the nation is home to 122 languages and more than 19,500 dialects.

He said unity in diversity is India's defining trait, a common language is needed as a culturally unifying factor.

Shah appealed to the citizens to work towards making Hindi the most widely used language in the world. He said Hindi should reach every individual and every home in the country.

"Next year we will hold the Hindi Divas functions in different parts of the country. I appeal to every parent to speak to their children in their own language and also with the co-workers," he said.

He said when the country will face the next general election in 2024, Hindi would have achieved a monumental status.

The home minister said socialist leader Ram Manohar Lohia had said in a democracy, the language of the government should be a language which people can understand.

"When I first took charge of the home ministry, in the first 10 days, not a single file has come to me with Hindi noting. Now, 60 per cent files which come to me have Hindi notings," he said.

"Swaraj had ensured that the UN issues regular Hindi bulletins also tweets in Hindi," he said.

Speaking on the occasion, Union Minister of State for Home G Kishan Reddy said while Telugu is his mother tongue, he has equal love for Hindi.

He said a mother tongue and national language must go together.

Union Minister of State for Home Nityanand Rai said languages are the souls of societies and nations. He called Hindi the symbol of India's democratic system.

Hindi Divas is observed to mark the decision of the Constituent Assembly to extend official language status to Hindi on this day in 1949. It was first observed in 1953. 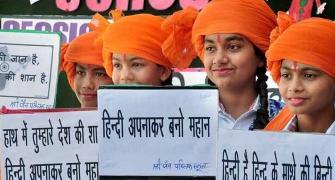