Prime Minister Narendra Modi on Monday said the time has come to cleanse the country of corruption and nepotism and asked people to have 'nafrat' (hatred) for these twin evils that go beyond politics, as he set a 'Panch Pran' (five resolves) target to make India a developed nation in 25 years. 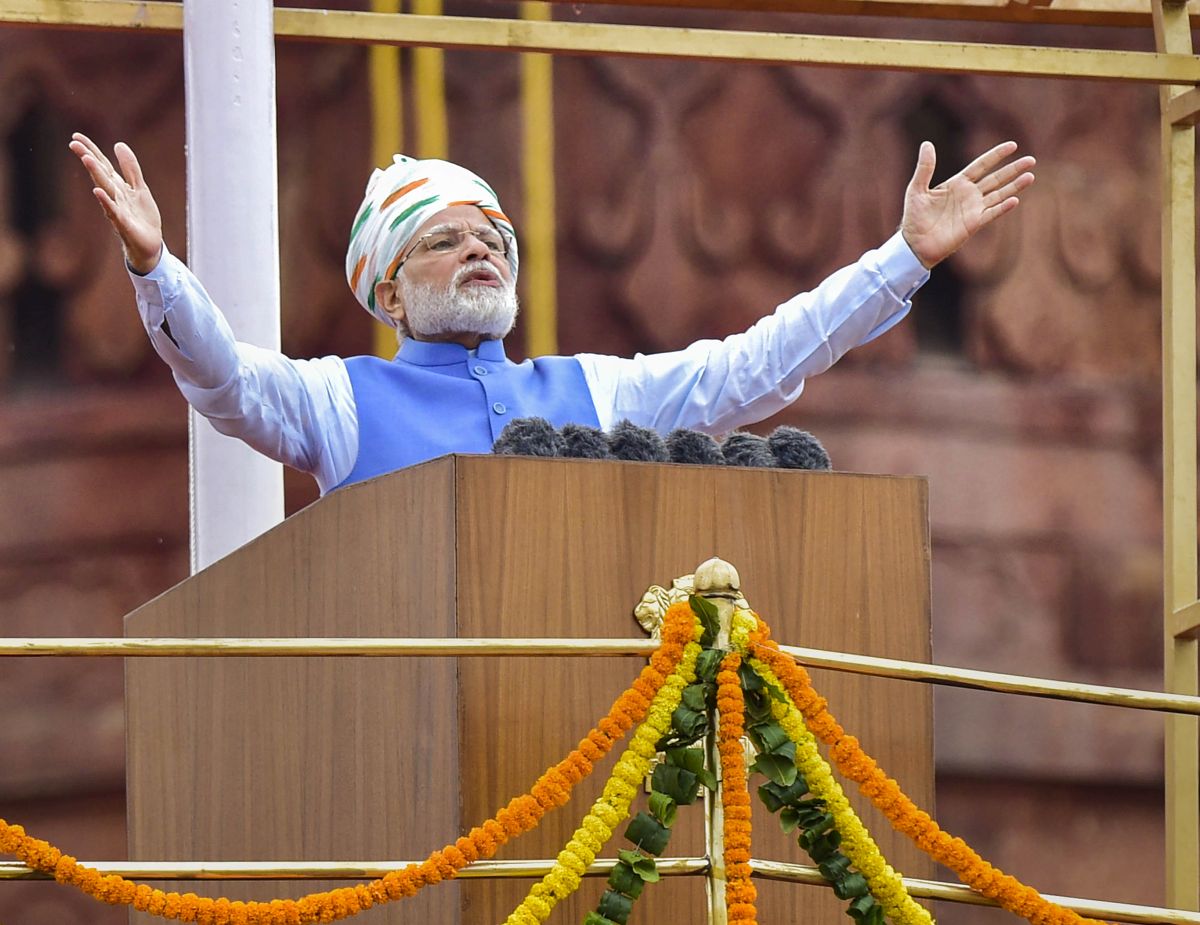 IMAGE: Prime Minister Narendra Modi gestures as he addresses the nation from the ramparts of the Red Fort on the occasion of the 76th Independence Day, in New Delhi on August 15, 2022. Photograph: Vijay Verma/PTI Photo

"The nation should now only be setting big goals. That big goal is a developed India and nothing less," Modi asserted in his ninth consecutive address from the ramparts of Red Fort on the country's 76th Independence Day, as he also highlighted the challenges of dynastic politics.

India has entered a decisive era in its battle against corruption which is 'eating the country like termites', he said, adding corruption and nepotism are the two main challenges for the nation.

Dressed in a traditional kurta and churidar paired with a blue jacket and a white 'safa' with tricolour stripes, Modi unfurled the national flag amid a 21-gun salute by the indigenously-developed howitzer gun, ATAGS, which he noted with pride was the first from Red Fort in 75 years.

Modi said it was a historic day for India and the completion of 75 years of Independence was a time to move forward with a new resolve and he also spoke strongly for cooperative federalism, celebrating the country's diversity, unity among citizens, gender equality, and research and innovation.

While his 82-minute speech was peppered with several exhortations, including removing the 'distortion' in our conduct causing insult to women and the slogan 'Jai Anusandhan' to promote research and innovation, but there was no announcement of any new initiative or scheme as has been the case in many of his and his predecessors' Independence Day speeches earlier.

"A distortion has crept in our conduct and we at times insult women," Modi said as he struck a chord with women, and asked, "Can we take a pledge to get rid of this from our behaviour and values?"

Asserting that giving respect to women is an important pillar for India's growth, he said it is important that in speech and conduct 'we do nothing that lowers the dignity of women'.

The prime minister cautioned the countrymen against complacency over the country's achievements in the last 75 years, and said it has to now focus its strength on fulfilling the 'Panch Pran' in the next 25 years in the run up to the centenary of its independence.

He spelt out the the five pledges as a resolve for a developed India; removing any trace of the colonial mindset; taking pride in our legacy; our strength of unity; and fulfilling the duties of citizens, which include prime minister and chief ministers as well.

"We have to move forward with these five resolves in mind and take up the responsibility to fulfil the dreams of our freedom fighters in the next 25 years when we attain 100 years of independence."

Modi said in this 'Amrit Kaal', a reference to the next 25 years, every Indian is aspiring to see the fast progress of a new India with enthusiasm and impatience and asserted that he has dedicated himself to fulfilling Mahatma Gandhi's wish to empower the last person in the queue.

"This Amrit Kaal is providing us a golden opportunity to fulfil the dreams and goals of an aspirational society."

A thick security cover was thrown at the main Independence event in the national capital and also in several parts of the country. The Red Fort was also decked up in tricolours, flowers and murals depicting key events that led up to India's freedom. IMAGE: A wordcloud of the PM's speech at Red Fort.

While Congress spokesperson Pawan Khera took a swipe at Modi over his remarks against nepotism, top Bharatiya Janata Party leaders and Union ministers hailed the prime minister's speech as 'invigorating' and said he set the vision for a 'Param Vaibhav Bharat' and reiterated his commitment towards women empowerment and fight against corruption.

Khera claimed that Modi was actually talking about internal politics of the BJP and attacking his own ministers whose sons are occupying high positions in the fields of cricket and politics despite not having expertise.

Underlining the importance for unity, Modi said people have to celebrate the diversity of a big country like India as the country's many faiths and traditions are its pride.

Gender equality is the first condition for unity, he said, adding that women are now doing very well in different sectors, including science and people's representation.

"Our nation has proved that we have an inherent strength from our diversity and the common thread of patriotism makes India unshakeable," Modi said, as he termed India the 'mother of democracy'.

He also pushed back sharply against the Opposition's charge that his government was using federal agencies like the Enforcement Directorate to target its leaders over alleged corruption, and also slammed 'parivarvad and bhai-bhatijavad' (dynasty and nepotism).

"Corruption is eating the country like termites and we have to fight it with full might. It is our endeavour that those who have looted the country have to return it," he said, and also slammed the efforts to 'glorify' them, an apparent reference to the opposition parties defending those accused of corruption.

"This mindset is not going to end unless there is a feeling of 'nafrat' (hatred) for corruption and the corrupt and people are forced to look down upon them socially."

Though the prime minister took no names, the BJP has often slammed the Congress for its nationwide protests against the ED's questioning of its leaders Sonia and Rahul Gandhi in the National Herald money laundering case.

Under his government, he said, over Rs 2 lakh crore which would have gone in wrong hands earlier has now been invested in the the country's development using direct benefits transfer.

"We are trying to bring back those who ran away after looting banks in the previous governments. We have seized their assets. Many people have been forced to live in jails. Our effort is that those who have looted the country pay back and we are creating conditions for it."

"Even the big people will not be able to escape," Modi said.

Also hitting out at dynasty politics and nepotism, he said their presence in politics nourished this evil in all other institutions of the country. This must be ended, he said.

"This nepotism harms India's talents and capabilities. This is also a reason for corruption as people resort to it when they see no other option," he said, seeking awareness against this to rid India's institutions of these evils for their bright future.

He said he considered it his constitutional and democratic responsibility to fight these evils and sought people's support.

"In politics too, the dynasty has done the most injustice to the country's strength. Dynastic politics is aimed at a family's welfare and has no interest in the country's welfare," he said, asking people to join him in purifying Indian politics and institutions to rid the country of this to take the country forward.

Otherwise, everybody feels frustrated because they believe they did not get their due because they had no relatives to promote them, he said. This mindset is not good for any country, he added.

With his government often accused by the Opposition of weakening states' rights, Modi underlined his faith in cooperative federalism and the spirit of 'team India', saying this is what he practised when he was Gujarat chief minister and a different party (Congress) was in power at the Centre.

"We may have different programmes and working styles but our dreams for the nation are not different," he said in an apparent appeal to opposition parties to work together to develop the country.

At the start of his address, he paid tributes to freedom fighters and leaders from across the political spectrum for their contributions to the independence struggle and nation-building, including Mahatma Gandhi, Jawaharlal Nehru, Sardar Vallabhbhai Patel, V D Savarkar, Ram Manohar Lohia, Netaji Subhas Chandra Bose, Babasaheb Ambedkar and Mangal Pandey among others. 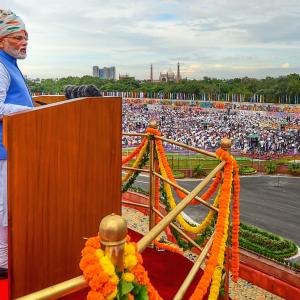 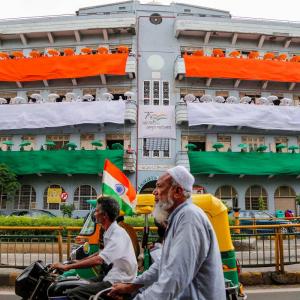