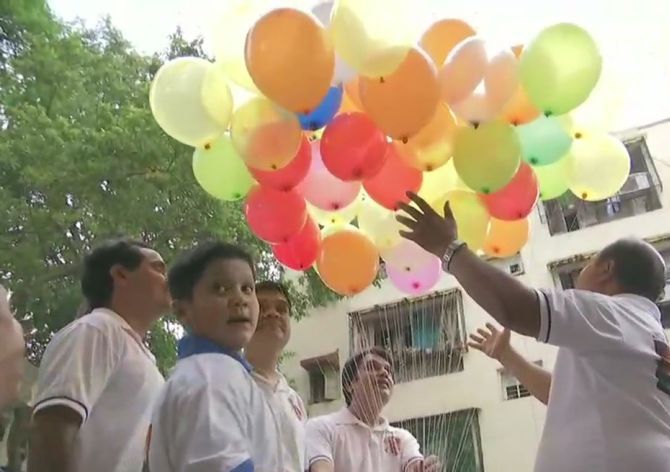 Residents of a small village in western Maharashtra district of Satara on Wednesday celebrated as the International Court of Justice (ICJ) stayed the death sentence
awarded to local lad Kulbhushan Jadhav by a Pakistan court.

There were cheers of joy and sighs of relief as Judge Abdulqawi Ahmed Yusuf, president of the ICJ, read the courts decision in the Kulbhushan Jadhav case and stayed death sentence awarded to him by a military court till Pakistan reviews the trial.

The ICJ has ruled in favour of India on merits, affirming Jadhav's right to consular access and notification and directed Pakistan to provide effective review and reconsideration of his conviction and sentences.

A villager said that Jadhav has built a house in his farm at Javli and used to visit the village two-three times a year.

"The Indian government should get him released at any cost. It is their responsibility. India should pressurise Pakistan to release Kulbhushan Jadhav," the villager said.

Kulbhushan Jadhav is the son of Sudhir Jadhav, a retired Assistant Commissioner of Police in Mumbai. His uncle Subhash Jadhav, also a retired ACP, said, "We are happy that the judgment went in our favour and now await Kulbhushan's return to India."

At Parel in south Mumbai, where Kulbhushan Jadhav lived for some years, friends and relatives watched the ICJ proceedings live on a TV, with a prayer on their lips.

A friend of Kulbhushan said they arranged for a TV set where they would sit together and watch the ICJ ruling. After the ruling, they released balloons and pigeons in the sky as a gesture of peace.