'What happened last Sunday is a great tragedy, an insult to humanity' 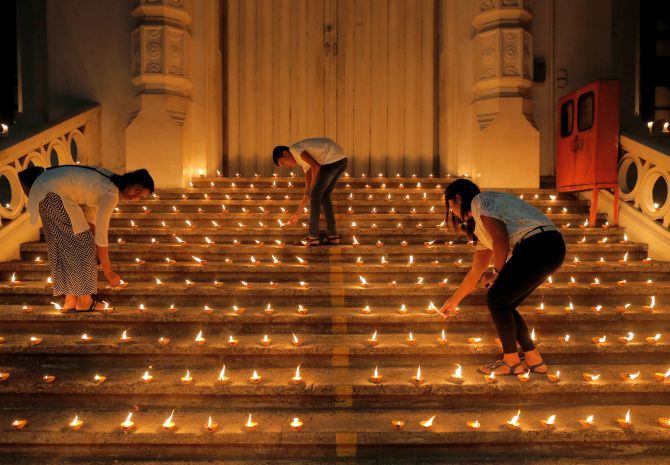 IMAGE: People light candles during a vigil in memory of the victims of a string of suicide bomb attacks across the island on Easter Sunday, in Colombo. Photograph: Thomas Peter/Reuters

Barring three areas, Sri Lanka on Sunday lifted the nationwide night curfew which was imposed after the island nation was rocked with eight blasts targeting churches and hotels that killed 253 people, including Indians.

Police also said they have arrested one more person suspected to be involved in the Easter blasts.

Ibrahim Mohamed Ifran Ahmed, the elder brother of two suicide bombers at the Shangri-La and Cinnamon Hotels, was arrested in Dematagoda area for possessing swords and an air rifle, he added.

Gunasekera said a mother-child duo rescued by police from a terrorist safe house at Sainthamarudu in Eastern Sri Lanka during a raid have been identified as the wife and four-year-old daughter of Mohamad Zahran Hashim, the suicide bomber-cum-mastermind of the serial bombings.

"Abdul Cader Fathima Sadia and Mohamad Zahran Rusaina, 4, rescued from the blasts and taken to Ampara hospital have been identified by Zahran's sister as his wife and daughter," he said.

The Special Task Force and Army troops, following a tip-off, raided a house in Kalmunai city at at Sainthamarudu on Friday night, leading to a heavy exchange of fire with armed militants. As many as 15 people, including six children and three women, were killed in the shootout.

Sri Lanka's Roman Catholic leaderon said God is the reflection of love and kindness and wondered how someone can kill in the name of God as he referred to the Islamist militants who claimed the massive Easter Sunday bombings were on behalf of the Almighty.

As the country marked a week since the coordinated blasts hit three churches and three luxury hotels, killing 253 people and inuring over 500 others, Archbishop of Colombo, Cardinal Malcolm Ranjith, conducted the special private mass.

Attended by President Maithripala Sirisena and Prime Minister Ranil Wickremesinghe along with other leaders, the mass was shown live on television after Sri Lanka's Catholic churches on Thursday suspended all public services until the security situation improves.

The Archbishop, who started his mass with an appeal for peace and unity, said: "It is our faith which has been challenged".

"God is the reflection of love and kindness, so how can someone kill in the name of God?" Cardinal Ranjith asked in a reference to the militants who claimed that the attacks were on behalf of the almighty.

"What happened last Sunday is a great tragedy, an insult to humanity," he said, adding that nothing is more precious than the human lives.

The Islamic State terror group has claimed the April 21 coordinated blasts, but the government has blamed local Islamist extremist group National Thowheeth Jamaath for the attack.

In a statement issued through its propaganda 'Amaq' news agency, the Islamic State claimed that "the executors of the attack that targeted citizens of coalition states and Christians in Sri Lanka two days ago were with the group," according to the Site Intelligence Group, which monitors jihadist activities.

It listed the names of the suicide bombers, who were also shown in a video swearing allegiance to the terror group.

The Islamic State statement, which was disseminated on the group's chat rooms on the app Telegram, said that the bombings had been intended to target Christians, as well as citizens of countries belonging to the coalition fighting the Islamic State.

The group referred to Easter as an "infidel holiday".

Sri Lanka has said that the NTJ was behind the attack and it was investigating whether they had international support.

A total of 106 suspects, including a Tamil medium teacher and a school principal, have been arrested in connection with the Easter Sunday blasts, the police said.

Sri Lanka on Saturday banned the NTJ and a splinter group linked to the Islamic State.

According to Sri Lanka's Foreign Ministry, the number of foreign nationals who have been identified as killed remained at 40, including 11 from India.

Nearly 1,600 refugees from about 15 countries, mostly from Pakistan, from various religious beliefs are facing threats and have been attacked in Sri Lanka following the Easter Sunday bombings, an official said Sunday.

They had arrived here to avoid persecution in their own countries.

A majority of them are Pakistani Christians, a welfare official working with the refugees said.

A majority of them were living in the western coastal town of Negombo where one of the Churches, St Sebastian's, came under attack by an ISIS-linked suicide bomber.

"They have come under attack and threats, some of them have been subject to physical violence. Their landlords have been pressed to evict them," the official said.

The moves to shift them elsewhere have been met with resistance by respective local politicians.

"At least 4 times they had been taken in buses out of Negombo only to be brought back due to protests," the official said.

He said the state protection for them and collaboration with the UN refugee agency were important.

"The government's public commitment is needed to explain the temporary nature of their stay and why we need to support and protect them," the official said.

Sporadic cases of anti-Muslim violence have been reported since the blasts. 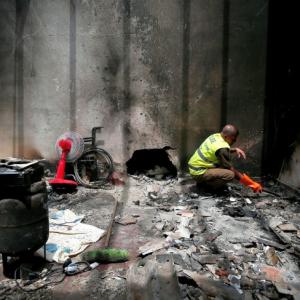