Driven from its self-styled caliphate in Iraq and Syria, Islamic State is down but not out. Where once they confronted armies, the extremist Islamist group's adherents have now staged hit-and-run raids and suicide attacks.

In some cases, the group has claimed responsibility for atrocities, including the bombings of churches and hotels in Sri Lanka that killed at least 253 people.

Its involvement is not always proven, but even if the link is ideological rather than operational, Islamic State still poses a security threat in many countries. 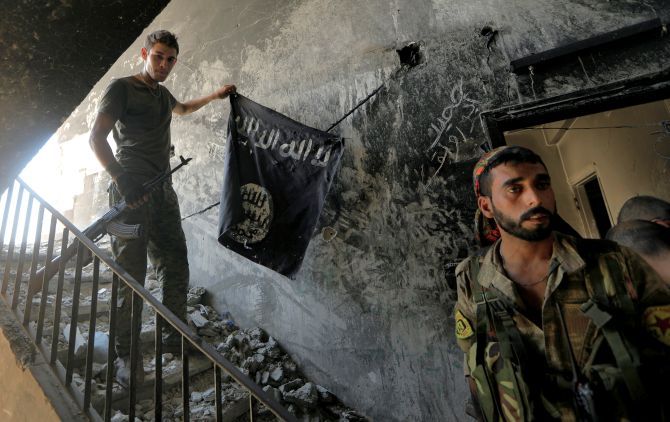 IMAGE: A member of the Syrian Democratic Forces calls his comrades during the fighting with Islamic State fighters in Raqqa, Syria. Photograph: Zohra Bensemra/Reuters

After serious military setbacks, Islamic State slipped into the shadows, staging suicide bombings and ambushes. IS has carried out bomb attacks in towns and cities of northeast Syria in recent months, including some targeting United States forces.Syrian Kurdish forces, which control the region and crushed the jihadists with US help, have sounded the alarm about the group's new tactics. They believe sleeper cells have mushroomed across eastern Syria and expect guerrilla attacks to escalate. They also warn of the risk posed by holding thousands of militants in prison camps. IS fighters still hold some ground in Syria's remote central desert, where they have staged attacks in recent days. After defeat by US-backed forces, Islamic State has reverted to the guerrilla tactics it was once known for. Sleeper cells have regrouped in provinces including Diyala, Salaheddin, Anbar, Kirkuk and Nineveh, where they carry out frequent attacks, including kidnappings and bombings aimed at undermining the Baghdad government. In February, two people were killed and 24 wounded when a car bomb went off in Mosul, once the group's Iraqi capital. The Pentagon said in January that IS was regenerating faster in Iraq than in Syria. Analysts estimate that about 2,000 active combatants now operate in Iraq. 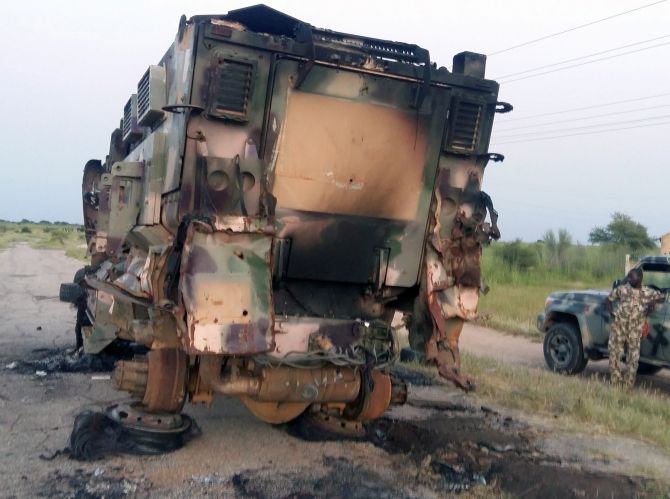 IMAGE: A damaged military vehicle is pictured in the northeast town of Gudumbali, after an attack by members of Islamic State in West Africa, Nigeria. Photograph: Kolawole Adewale/Reuters

Nigerian group Boko Haram has carried out attacks in the northeast since 2009 in pursuit of an Islamic caliphate. It has killed 30,000 people and forced 2 million to flee their homes. The group split in 2016 and one faction pledged allegiance to IS. Islamic State's West Africa Province has focused on attacking military bases in raids over the last year. It has become the dominant terror group in the region as a result of these raids. ISWAP's activities are concentrated around Lake Chad, which borders Nigeria, Cameroon, Chad and Niger. IS claims attacks in the Lake Chad region through its Amaq news agency. However, the extent of support provided by Islamic State to ISWAP is unclear and many security experts say the relationship is mainly in name rather than direct funding and logistical support. 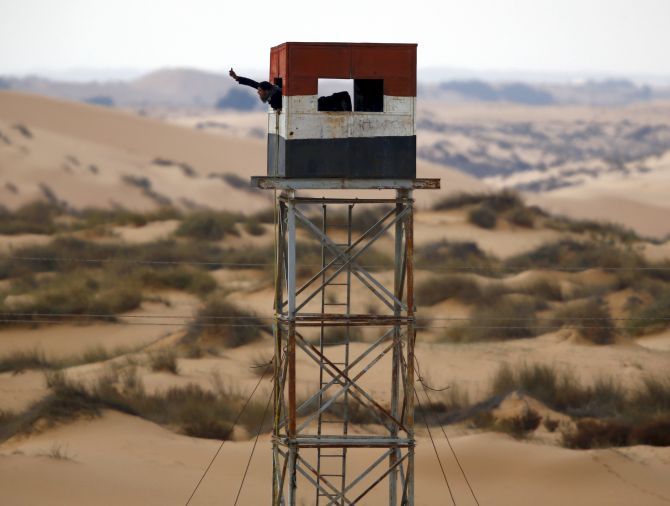 IMAGE: An Egyptian policeman gestures from an observation tower is seen from the Israeli side of the border with Egypt's Sinai peninsula, in Israel's Negev Desert. Photograph: Amir Cohen/Reuters

Egypt has seen no large attacks over the past year, but smaller incidents persist and the military is mounting a campaign against Islamist insurgents, mainly on the Sinai Peninsula. The military says several hundred terrorists have been killed since it launched a major campaign in February 2018 to defeat fighters linked to Islamic State in Sinai. Three civilians and four police personnel were killed this month by a suicide bomber in the North Sinai town of Sheikh Zuweid, the interior ministry said. Claiming the attack, Islamic State said 15 people were killed or wounded. In November, gunmen killed seven Christians on a bus in Minya province, south of Cairo. IS claimed responsibility. 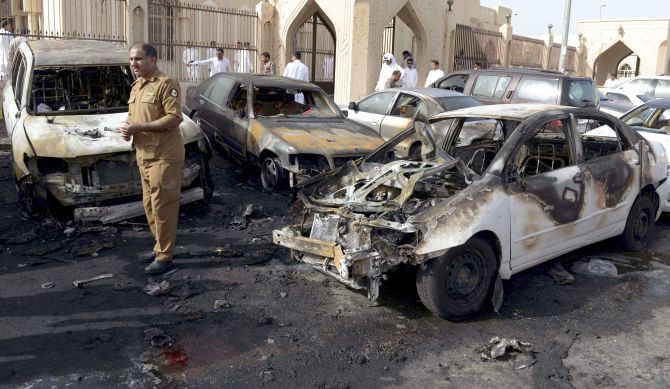 IMAGE: A policeman carries out an inspection after a car exploded near the Shi'ite al-Anoud mosque mosque in Saudi Arabia's Dammam on May 29, 2015. Photograph: Faisal Al Nasser/Reuters

Islamic State terrorists have carried out deadly bombings and shootings in Saudi Arabia against security forces and minority Shi'ite Muslims, after the authorities crushed an Al Qaeda insurgency over a decade ago. Kamran Bokhari, a director at Washington-based think-tank the Center for Global Policy, said Islamic State does exist in the kingdom but the Saudi security forces and intelligence service are "pretty much on top of things". 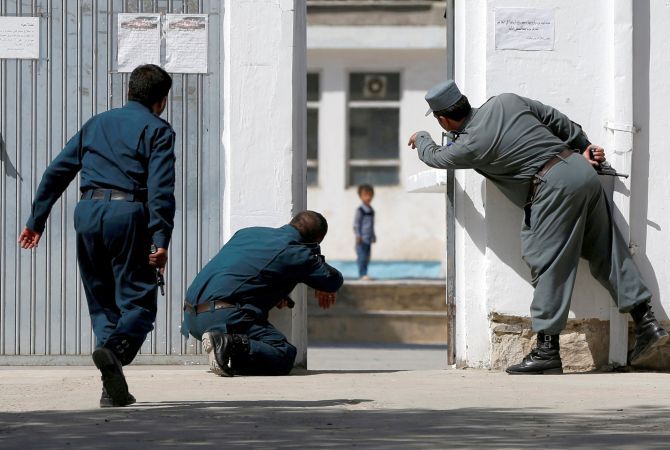 IMAGE: Afghan policemen try to rescue four-year-old Ali Ahmad at the site of a suicide attack followed by a clash between Afghan forces and insurgents after an attack on a Shi'ite Muslim mosque in Kabul, Afghanistan. Photograph: Omar Sobhani/Reuters

Islamic State in Khorasan, which took its name from an historical region that covered much of modern-day Afghanistan and parts of Central Asia, appeared in late 2014 in the eastern province of Nangarhar, where it retains a stronghold. It announced its formation in January 2015. The group's leadership has pledged allegiance to Abu Bakr al-Baghdadi, the leader of IS, but it is not clear that ISIS-K has direct operational links with the main movement. It has claimed attacks on civilian targets in cities including Kabul and fought the Afghan Taliban for control of a number of rural districts. 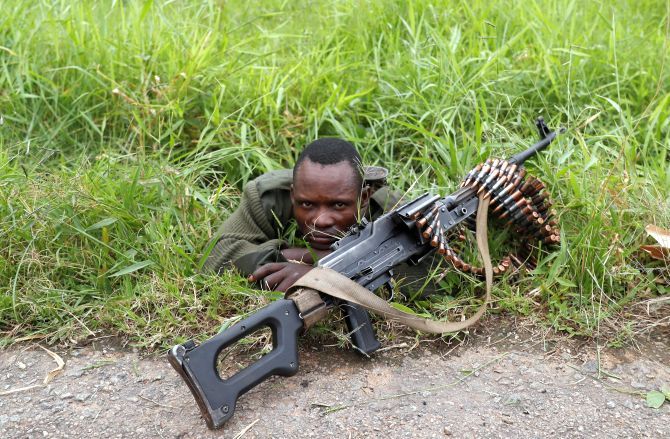 Islamic State claimed its first attack in Congo on Thursday, and declared it the "Central Africa Province" of the "Caliphate". Congo's President Felix Tshisekedi said the defeat of IS in Syria and Iraq meant the group might come to Africa and take advantage of poverty and chaos in an attempt to set up a caliphate. A spokesman for the US Africa command said the Allied Democratic Forces, a local terror group, had meaningful ties to Islamic State, to which it claimed allegiance in 2017. 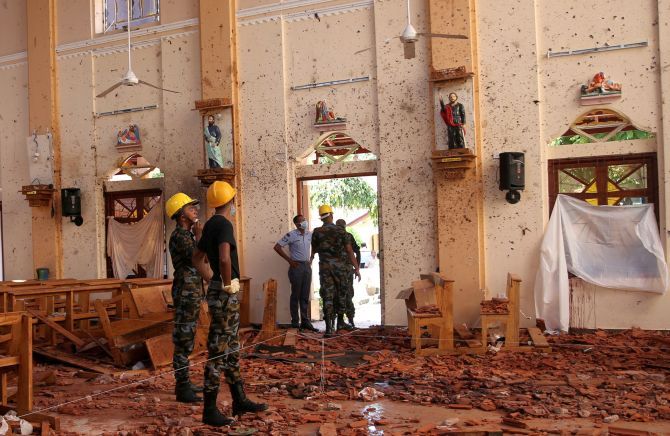 Islamic State claimed the Easter Sunday bomb attacks on churches and hotels and released a video showing eight men declaring loyalty to Baghdadi. IS claims the men in the video, released on Tuesday by its Amaq news agency, carried out the suicide bombings. Sri Lankan officials have blamed two domestic Islamist groups with suspected ties to Islamic State. The scale and sophistication of the attacks suggested the involvement of an external group such as Islamic State, said Alaina Teplitz, the US ambassador to Sri Lanka. 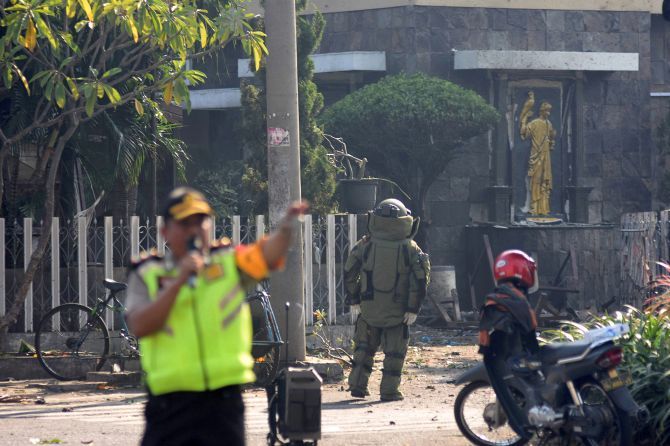 Indonesia is the world's most populous Muslim-majority country and most people practise a moderate form of Islam. But there has been a resurgence in militancy and authorities have said they believe thousands of Indonesians draw inspiration from Islamic State, while about 500 Indonesians are thought to have gone to Syria to join the group. A court sentenced a cleric, Aman Abdurrahman, to death last year for masterminding deadly attacks. Abdurrahman is considered the ideological leader of Jemaah Ansharut Daulah - a loose grouping of Islamic State sympathisers in Indonesia. Suicide bombings in May last year in Surabaya that killed more than 30 were linked to JAD cells. 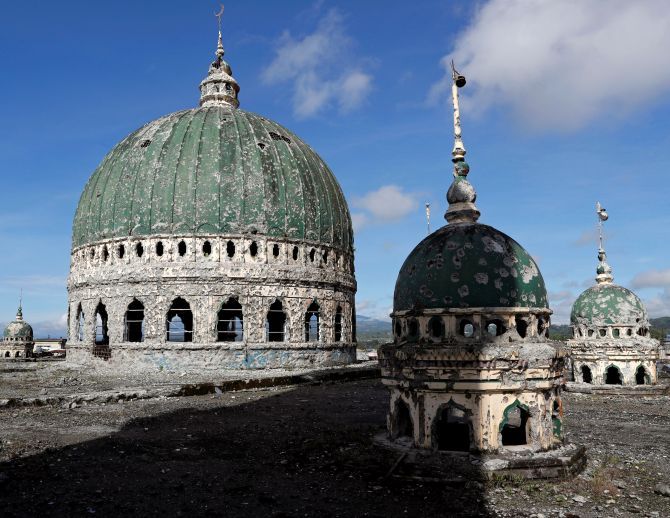 IMAGE: The bullet-riddled domes of Grand Mosque are seen, after residents were allowed to return to their homes for the first time since the battle between government troops and Islamic State militants began on May 2017, at the Islamic city of Marawi, Philippines. Photograph: Erik De Castro/Reuters

The Philippines fears that extremists fleeing Iraq and Syria could find a safe haven in the jungles and remote villages of Muslim areas of Mindanao, where there is a long history of lawlessness, clan rivalry and separatist and Islamist rebellion. Several splinters of the myriad armed groups in the southern Philippines have pledged allegiance to Islamic State, although none are known to have been endorsed as its Southeast Asian affiliate. Islamic State often claims responsibility for bombings and rebel clashes with government troops in Mindanao, but their veracity is often disputed. 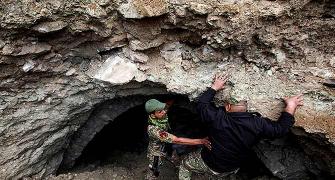 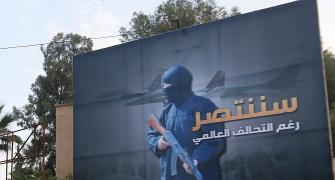 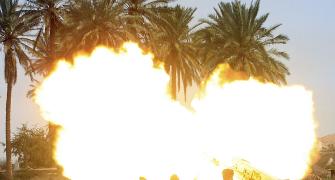 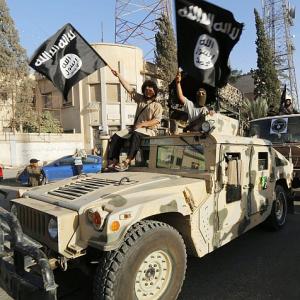