Vowing not to spare anyone involved in the Delhi violence irrespective of their religion, caste or party affiliation, Home Minister Amit Shah on Wednesday said in Lok Sabha it will be a lesson for the country on what befalls those who indulge in rioting. 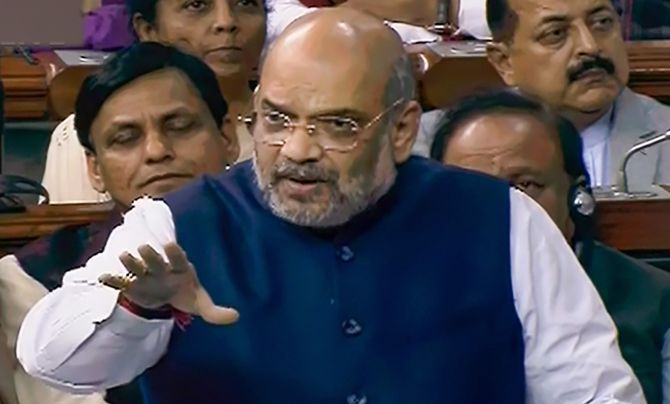 Replying to a discussion in the lower house on the Delhi riots, Shah said prima facie the violence appears to be a pre-planned conspiracy.

Despite the Opposition's criticism over alleged inaction by the Delhi Police during the violence last month, Shah appreciated the police for not allowing the riots to spiral.

Complimenting the Delhi Police for controlling the riots within 36 hours, Shah said its actions ensured that the violence was "limited to a geographical area" and did not spread.

He said that a total of 2,647 people have been detained or arrested in these riots "which prima facie is a pre-planned conspiracy".

About 700 FIRs were filed, 152 weapons used in violence seized so far and 49 cases lodged under Arms Act, he informed the House.

A case of conspiracy was filed after looking at how the riots spread in such a short span of time, Shah said, adding that more than 300 people apparently came from Uttar Pradesh.

Expressing grief over the loss of lives and conveying his condolences to the bereaved families, Shah said he wants to assure them that no one who was involved in the riots will be spared.

"We will spare no one irrespective of their religion, caste and political affiliation. Such action will be taken that it will be lesson for the country on what befalls those who indulge in rioting," he said.

He assured the House that CCTV footage is being analysed using face identification software, and took a dig at the Opposition, saying that the software does not discriminate on the basis of religion or clothes.

He said details of voter identity cards and driving licences were fed into the software which helped identify 1,100 people.

Responding to the Opposition's criticism on not visiting riot-affected areas, Shah said he didn't want to divert the attention of Delhi police at such a sensitive time.

"I did not go to the ground because I did not want the police to get distracted and divert their resources for my security," he said.

Shah also said he didn't attend various events related to United States President Donald Trump's visit to Delhi as he was busy with Delhi police in formulating strategy to control the violence.

Though he attended US President Trump's event at Motera stadium in Ahmedabad, as it was pre-planned and it was in his constituency.

Shah said it was on his request that National Security Advisor Ajit Doval visited the riot-affected areas to raise morale of the Delhi police.

Taking on the Opposition, Shah said the government wanted a discussion on the Delhi violence in parliament after Holi to avoid communal flare up during festival time, but some have other priorities.

Giving details of the casualties due to riots, Shah said, "52 Indians lost their lives during the violence".

Unlike the Opposition, Shah said he doesn't want to name how many Hindus or Muslims died.

While Shah was speaking, the Congress walked out in protest.

Parliamentary Affairs Minister Prahlad Joshi said the opposition party earlier demanded a debate on the issue and now it was walking out, which showed it was not serious on the issue of Delhi violence.

Without mentioning Congress, Shah said an opposition leader at a party rally on February 24 gave the call for "aar paar ki ladai" and asked wasn't it a hate speech.

He was apparently referring to Congress president Sonia Gandhi.

He also attacked AIMIM Assadudin Owaisi for his party leader Waris Pathan's controversial remarks at a rally against the Citizenship Amendment Act.

Strongly defending CAA, he said there were more than 25 laws drafted on the basis of religion, while CAA doesn't discriminate with anyone.

He also said that 76 per cent of riot related deaths so far have been under the Congress rule and the party had "no moral right to question us".

He cited the 1984 anti-Sikh riots and the controversial statement made by a Congress leader to attack the opposition party.