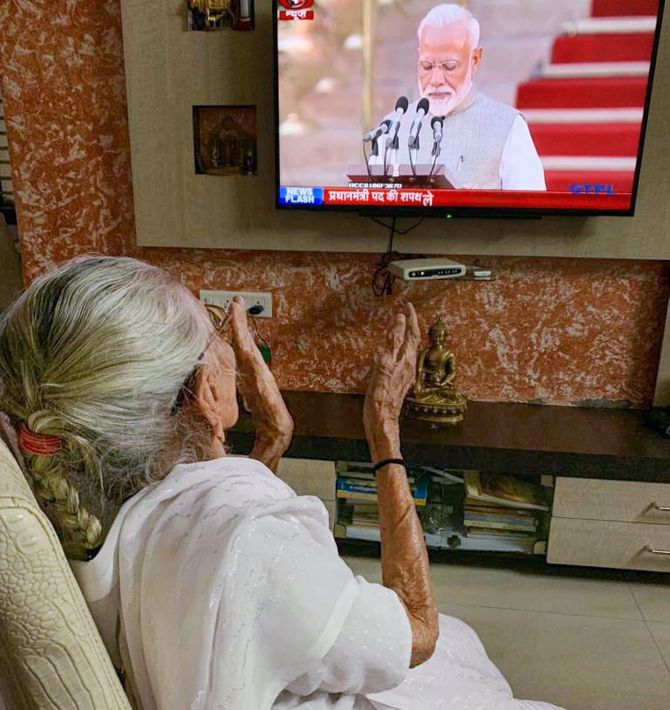 IMAGE: Prime Minister Narendra Modi's mother Hiraba watches him on television as he takes oath of office and secrecy for the second term, at her residence in Gandhinagar, on Thursday. Photograph: PTI Photo

From 'Ab ki baar Modi sarkar' in 2014 to 'Phir ek baar Modi sarkar' five years later, Narendra Modi kept his word as he was sworn in prime minister on Thursday, slipping into a second term as skillfully as the simple but well-crafted election slogans tied his two campaigns together.

The 68-year-old Bharatiya Janata Party leader, who took oath against the magnificent backdrop of the Rashtrapati Bhavan with thousands gathered in the forecourt and millions watching on their television screens, is only the third prime minister after Jawaharlal Nehru and Indira Gandhi to return for a second successive term with a full majority.

The focus shifts almost immediately from celebrations to the challenges faced by the man who powered his party to 303 seats in the Lok Sabha.

A stuttering economy, deepening agrarian crisis, rising unemployment and a hostile Pakistan are the immediate issues that await the attention of PM Modi 2.0.

There are expectations the Modi government will usher in further economic reforms to complement initiatives like goods and services tax to boost the economy.

As he seals his legacy as one of post-independent India's most powerful leaders - described by the opposition as the most contentious and divisive -- Modi is the man mainly Hindu India has embraced.

He will also face mounting expectations over the building of a Ram temple in Ayodhya, a movement that propelled the party to the national political centrestage in the 1990s.

In what will be a delicate balancing act, the prime minister needs to, at the same time, allay apprehensions of the Muslim community in a bid to counter the feeling of alienation among a section of minorities in the last five years.

He blunted criticism with the punchline -- 'Sabka Saath, Sabka Vikas' (together with all, development for all) -- during his five-year long stint as prime minister.

In an address to the newly elected National Democratic Alliance MPs, Modi added 'sabka vishwas', seen as an effort to reach out to Muslims.

With BJP highlighting national security as a core area of interest, Modi may have to walk the tightrope between normalising ties with Pakistan and also continue a tough approach in dealing with cross-border terrorism.

It will be interesting to see whether Modi scraps Article 370 and Article 35A, dealing specifically with Jammu and Kashmir, in the face of strong opposition from various groups in the status.

Article 35A empowers the state assembly to define 'permanent residents' for bestowing special rights and privileges on them.

The poster boy of Hindutva from Vadnagar, a small town in north Gujarat's Mehsana district, Modi was unstoppable as he transported the BJP to colossal success on a wave of muscular nationalism, majoritarian pride and charisma.

As he takes the prime minister's chair for a second time, it marks the culmination of a fascinating journey from an ordinary Rashtriya Swayamsevak Sangh 'pracharak' to Gujarat's longest serving chief minister and then the prime minister.

It was a journey that began in the by-lanes of Vadnagar on September 17, 1950. Modi was the third of six children born to Damodardas Modi and Hiraba Modi.

The political journey began 35 years later in 1985 when Modi, an RSS 'pracharak', was loaned to the BJP.

He was a backroom party office-bearer and key strategist till he was made chief minister of Gujarat to replace Keshubhai Patel in October 2001.

In September 2013, the then chief minister was a rank outsider to the 'Delhi club' was anointed BJP's PM candidate for 2014 Lok Sabha polls.

There has been no looking back since for the man who, quite like Teflon, has deflected every criticism and controversy during his five years as prime minister to engineer an electoral victory viewed as his alone.

As prime minister in his first stint, Modi ushered in a series of economic reforms, including rolling out a pan-India GST and the Insolvency and Bankruptcy law to effectively deal with insolvency and bankruptcy.

He has been hailed for the Swachh Bharat campaign, building toilets, bringing electricity and cooking gas to remote and poor homes across the country.

Under his administration, India also saw the rapid expansion of the road network and modernisation of the rail network.

However, demonetisation, a major initiative of Modi, hit the economy hard, triggering joblessness and a dip in manufacturing.

As prime minister, he also could not fulfil lofty promises like bringing back black money from foreign shores and doubling farm income.

At the same time, India's position on World Bank's ease of doing business index rose to 77 from 100 as result of economic reforms.

On the diplomatic front, Modi pursued an aggressive policy positioning India as a major global player and making efforts to bolster the country's ties with countries like the United States, Russia, China, Japan and the UK. But perhaps his greatest achievement was showing Pakistan its place following the air strikes on a terror camp in Balakot.

But that was the last five years. What will the next five be like?