He has left no one in any doubt about his ability to take bold, even out-of-the-box, decisions, to gauge the feelings and aspirations of the common people at the grassroots and to ensure that policies and schemes do not remain on paper but are implemented, says B S Raghavan, the distinguished civil servant. 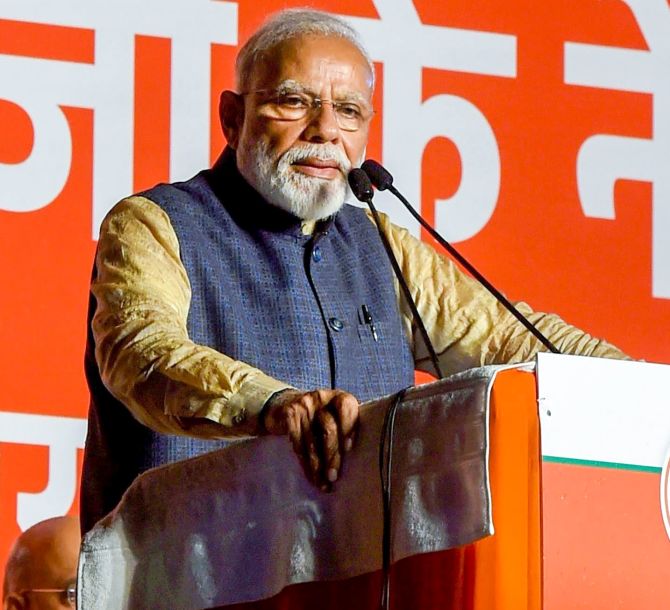 As at the time of writing, the National Democratic Alliance has not entered upon its second term and the composition of the council of ministers is not known.

But even at this stage some general observations can be made, without going into specific policy recommendations.

People expect a government to govern, not pussyfoot.

People respect a government that governs and does not pussyfoot.

Governing means exercising the powers under the law wisely but also effectively, not for one's own, or a political party or cabal's aggrandisement, but in the supreme interest of the nation.

Narendra Damodardas Modi, in his first term, has shown his capacity to govern and exercise power effectively in the nation's interest.

He has left no one in any doubt about his ability to take bold, even out-of-the-box, decisions, to gauge the feelings and aspirations of the common people at the grassroots and to ensure that polices and schemes do not remain on paper but are implemented.

The pace of execution of infrastructural projects has increased beyond all belief in his first term.

Now that he has received a massive endorsement from the world's largest electorate and his Bharatiya Janata Party has a sizeable majority in the Lok Sabha in its own right, and the NDA may soon have a commanding position in the Rajya Sabha as well, Modi has everything going for him.

All this gives him and his party and the alliance he heads a political weight which will readily evoke deference and acquiescence facilitating early adoption and determined execution of courageous, forward looking policies.

The complexion of the 17th Lok Sabha may assist in the process.

It is a youthful House, with 54 years as the average age of an MP.

The educational profile also is impressive: 43 per cent are graduates, 25 per cent are post-graduates and four percent have doctorates.

First-time MPs number 300 and they can be expected to be full of zeal and idealism, eager to make their mark in the service of the people.

Of course, on the flip side, 40 per cent (233) of MPs are facing criminal proceedings, of whom 116 belong to the BJP and 29 to the Indian National Congress, which also holds a record of sorts with Dean Kuriakose from Idukki facing 204 criminal cases.

The Association for Democratic Reforms, which has computed these figures from the affidavits of candidates, says the number of lawmakers facing grave criminal cases (including 11 for murder, 30 for manslaughter and three for rape) has more than doubled in the last decade.

And they will be making laws which the people would be called upon to obey.

One can only hope that Modi who has been emphatically vowing to root out corruption will not be giving ministerial berths to any MP who faces criminal cases or who belongs to an ill-reputed party.

We, the People, whose principal servant Modi has often, and rightly, proclaimed himself to be, owe it to him and to ourselves to be equally watchful that the government does not stray from the path of accountability, transparency and integrity.

The paramount duty of a democratically elected government is to be sensitive and responsive to the sentiments, needs and aspirations of the people.

The careerist mindset and hierarchical rigidities of permanent bureaucracy, which continue almost unchanged from the British days, keep them insulated and isolated from often harsh ground realities.

Long stretches of immersion in the desiccated, dehydrated and dehumanised vaults of secretariats have robbed them, maybe for no fault of theirs, of creative thinking and a passion for innovation.

The bureaucracy in India has no qualification and credentials to be considered a partner of elected governments in policy making.

It can at best be entrusted with the execution of policies and schemes formulated by the government by strictly adhering to the cost estimates and time schedules laid down.

The prime minister should set up a Policy Research Bureau, serviced by a small group of not more than four or five eminent scholars, experts and professionals giving them total freedom to come up with whatever new policies or revamp of existing policies would suit the present requirements and interests of the country and its people in line with the promises made to the people.

The success of any democratic government is contingent on the existence of the right political culture.

An impressive feature of the political culture of mature and genuine democracies is that once a ruling dispensation demits office, the political predecessors let the successors have the right to carry out the political mandate they have secured at the hustings in the manner they think best, enabling the representative bodies to function smoothly and purposefully.

Political parties in genuine and mature democracies do not take to the streets and go on a rampage causing loss of life and destruction of property every time they differ from the policies of the parties in power.

In India, the passing of the generation of the heroes of the freedom struggle was the signal for a rapid erosion in political culture, both within the sacred precincts of state and national legislatures and outside in the day-to-day relations among political parties and political leaders.

In recent weeks, the concerted campaign of personal vilification unleashed against the prime minister and the Goebbelsian tactics adopted to pull down the government at the Centre have become unprecedentedly venomous.

Political parties have indulged in brazen instigation of the defence forces to overthrow the Government and staged deliberate and wilful civil war like chaos.

In my 92-year long life I have not seen politics sink to such abysmal depths as I am seeing these days.

The Opposition parties may have their differences in regard to policies pursued by an incumbent government, but those differences are to be resolved within the nation's Constitutional system and within limits imposed by public order, and not by resort to behaviour akin to that of the beasts of the jungle.

In resorting to such behaviour, the politicians seem totally oblivious to the vicious example they thereby set to future generations who will grow up in a decadent and degenerate society from which all values and standards would have been wiped out.

What is most perturbing and causes unbearable anguish is the absence of any effort on the part of the educated and thinking sections of the people, especially those who have held leadership positions in public life to set things right.

Evil flourishes not because of evil doers, but because of the silence and inaction, tantamount to submission, on the part of good persons.

It is necessary for the prime minister to put to use his undoubted mastery of communicating skill to make a direct address the nation, both in English and Hindi, followed by translations in other Indian languages, by way of making the people and the nation aware of the devastating prospects confronting the nation if the present trends are allowed to continue.

His address should include a reference to the media which is giving space to the pernicious trends.

The readership and viewership of the print and electronic media has a multiplier effect and should not be ignored.

Apart from the prime minister's address to the nation, the council of ministers at the Centre, or even both Houses of Parliament, at a special meeting, could take out a resolution aimed at pulling the nation back from the brink of disaster to which it will head if values and norms are not adhered to in public discourse and public life.