Indians want change and progress. They should be willing to accept tough decisions, says Sanjeev Nayyar. The people of India have given Narendra Damodardas Modi an unprecedented mandate. So what should Modi 2's mission be?

India must work towards becoming an economic and military power.

Economic power implies being strong in manufacturing, services and agriculture.

Military power means possessing a military deterrent and building a manufacturing base of defence products; domestic and exports.

Indians want change and progress. They should be willing to accept tough decisions.

On its part, while effecting change, the government must take inputs from stakeholders and communicate benefits to ensure a buy-in.

Glitches during the introduction of GST will not be accepted. Thus, Implementation is key.

Modi 2 must run a national campaign कमरूपएमेंअधिकमूल्यपाओ or Get More Value for Every Rupee Spent. Consumers must demand better quality at the same price. This will force all to increase productivity. I learnt this mantra while working at Hindustan Lever.

Here are my seven ideas for Prime Minister Modi.

Solutions to farm distress will be effective if Modi 2 works with the states since agriculture is a state subject. States are responsible for building of irrigation canals, framing rules for contract farming, market in which farmers can sell (the APMC Act). The Centre mainly decides MSP for select products, agricultural credit and international trade policy.

We must realise that the fundamental problem with farming is of risk management. A farmer has to manage vagaries of rainfall, availability of inputs, market price etc. So small farmers are finding it difficult to manage risks -- and hence the distress.

Agricultural farm size needs to be consolidated by allowing bigger farmers. I propose that small farmers give their land on lease to bigger farmers who by virtue of scale are better positioned to manage risks etc. The land owner is employed as farm labour and given a share of output.

A precursor to this is that digitisation of land records should be done on a war footing. This will allow for contract farming, and contract farm owner to receive income support and make taking loans against land easy.

This will weed out non-farmers who show agricultural income and claim tax exemption. When this database is compared with data taken from the point of sale terminals of fertiliser companies, it would reduce fertiliser subsidy and set the tone for direct benefit transfer of the fertiliser subsidy.

A big problem is of depleting ground water levels. According to a recent editorial in The Tribune (external link), 'Central Ground Water Board reports that Punjab will become a desert in 25 years if exploitation of underground water resources continues at the current rate.'

To overcome market risks, farmers in Punjab grow rice because it sells at MSP. If the contract farming model stated above is followed, risks can be better managed.

We need to gradually move onto a system of growing water-intensive crops where abundant water is available.

States must agree to move agriculture to the Concurrent List to enable the Centre to work with them and effect long term change.

As a percentage of GDP, defence expenditure is at its lowest in years. We need to think differently. Here are 3 ideas:

One, select defence purchases be co-funded by the people of India and India Inc. Here is a proposed framework.

MoD creates a trust called, say Bharat Suraksha Trust. The government invites public contributions up to, say, 10% of the cost of a fighter aircraft (to take an example).

Creation of trusts allows individuals and Persons of Indian Origin to contribute and get a tax break under Section 80 (G) of the Income-Tax Act. Similarly, corporates to treat contributions as part of CSR.

Three, nominate reputed Indian companies to export defence products and undertake infrastructure projects abroad. These could be business deals and or funded by the Government of India. Timely completion of projects would enhance India's reputation worldwide.

One, run an IncredibleIndia2 campaign to attract tourists from Southeast Asia, Far East, Americas and India. Every Indian worldwide must promote tourism.

Three, make 18-hole golf courses around Gaya with residential facilities? The Japanese and Thais love golf, the Chinese are promoting it, the South Koreans are passionate about it and Myanmar has golf courses all over.

Besides ordinary devotees, the facility must host army officials and politicians from Buddhist countries.

The Bihar government must complete the long-delayed Patna Gaya Expressway. It should reduce travel time by half from the current four-odd hours for a 116-km distance.

Four, the Dalai Lama wrote to Prime Minister Modi (letter dated May 24, 2019) that, 'India is the only country that can successfully combine this ancient knowledge (Indian understanding of the mind and emotions) with modern education and ensure that people know how to achieve lasting peace of mind.'

Modi 2 must encourage the blossoming of individuals and Masters who can share India's ancient knowledge.

Five, Modi 2 should legislate that Hindu temples be handed over to them. Better managed, they will attract more devotees. It could start with the Tirupati mandir.

Huge backlog of cases has eroded people's faith in the judiciary. Court delays make it difficult to enforce contracts and affects the World Bank's rankings on ease of doing business.

Here are four ideas from the National Institute of Finance and Public Policy's paper dated March 25 2019.

One, 'the productivity of judges needs to be increased.

Two, 'the problem of judicial delays may not be solved by just increasing the number of judges. Instead, the productivity of Indian judges should be improved by streamlining the administrative functioning of the Indian judiciary.'

Three, 'this agency should also be given the task of re-engineering court processes to achieve greater efficiencies.'

Four, 'a key element in the process re-engineering will be the use of information technology.'

Laws need to be amended so that cases are decided in a time bound manner.

Courts should stick to administering law and interpreting justice and not spend time on dance bars, supervise the running of Board of Control for Cricket in India, etc.

It is time the executive returned to take charge at the wheel. A democratically elected government is best suited to seek inputs and decide even if it means making voters unhappy.

The holiday list needs to be pruned down and colonial legacy of summer holidays needs to end. Government servants have only gazetted holidays and are entitled to say 30 days annual leave, so must judges.

Run a nationwide campaign to enlighten people on the need for settlement through compromise. This will reduce the burden on courts.

The government must increase the financial limit above which matters go to court thereby reducing court load.

For example, in direct tax cases, prosecution should not be initiated for cases below Rs 1 crore of liabilities if the assessee has already paid the liabilities with interest.

At all times, remember the Supreme Court logo, Yato Dharma Tato Jaya -- 'Where there is dharma, there is victory.'

In spite of abundant resources, lower cost of production and a hard working population, the eastern states of West Bengal, Odisha, Bihar and eastern Uttar Pradesh have not industrialised as well as those in western and southern India.

Modi 2 must give incentives to corporates to set up their manufacturing units there. Lower costs would enable labour intensive garment companies to effectively compete with Bangladesh, Vietnam etc.

Modi the politician must not forget that the eastern states are responsible for the BJP getting 300 plus Lok Sabha seats.

It must aim for three large PSU banks namely the State Bank of India, Bank of Baroda and Punjab National Bank. The rest should be merged into these three, allowed to wind down their balance sheets or privatised.

Gradually government shareholding in three large banks needs to reduce from 33% for which appropriate legislation must be passed.

Land, labour and capital are tools for business.

Low interest rates was one of the reasons why economic growth took off during NDA 1. If Modi 2 continues to be fiscally prudent, the Monetary Policy Committee would have to reduce rates.

This is the best time to amend labour laws. Whilst protecting the interests of labour, employers should be given the right to hire and fire.

Have a simple Land Acquisition Act which lets the markets decide. Put in place a mechanism by which farmers, who sell their land, are advised by, say, PSU bankers on how best to use the money.

Since land and labour are state subjects, Modi 2 will need to take them on board.

Apart from these points, here also a suggestion on how Modi 2 should deal with China, 'a dangerous combination of an ascendant great power' and Pakistan, 'an implacably hostile neighbour'.

The Chinese respect those who talk business, are result-oriented and hate losing face in front of their people.

We can tell China that India could become part of the Belt and Road Initiative provided China convinces Pakistan to give India road access to Afghanistan through the Wakhan Corridor.

India should demand better access to Chinese markets, postpone 5G because it is not a crying need. We should identify sectors where we are heavily dependent on China -- for example, key active pharmaceutical ingredients (external link) etc and mobile phones.

Next, work towards making them locally. India should woo Taiwanese companies to manufacture cell phones, including the entire supply chain.

Our relations with the US, Japan, South Korea, Australia and the EU should be on merit and not by triggered by China's encirclement of or its acknowledgement of India's rise.

Pakistan cannot think beyond Kashmir and India is emphatic that cross-border terrorism must end first.

When there is no meeting ground, talks that make Pakistan look respectable are futile.

While maintaining people to people contacts, India must fully utilise its share of the Indus waters, tacitly support the Baluchistan Freedom Movement and re-build covert capabilities in Pakistan.

When your enemy is in trouble, let us not be lulled into inaction. Keep the pressure on!

If Modi 2 and the people of India rise up to the occasion, the world will look us differently. Till then Indians have to work very hard. 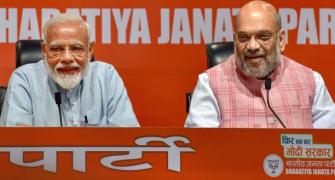