Opposition parties led by the Congress and the Dravida Munnetra Kazagham had moved motions for electing Rashtriya Janata Dal's Manoj Kumar Jha but these were not put to vote as they did not press for it.

The Janata Dal-United leader received lavish praise from Prime Minister Narendra Modi who said Harivansh belong to all sides of the aisle.

"He has conducted proceedings in an impartial manner. He has been an outstanding umpire and will continue being so in the times to come," Modi said.

Modi said Harivansh has in his first term made efforts to ensure productivity and positivity in Parliament. "He is a torchbearer of democracy, hailing from Bihar, a land known for its democratic ethos."

In 2018, Harivansh had defeated Congress's BK Hariprasad in the election to the post.

"Be it as a journalist or social worker, he has endeared himself to many. We have all seen the manner in which he conducts the House proceedings," Modi said.

The election was necessitated as Harivansh completed his term as a member of Rajya Sabha this year. 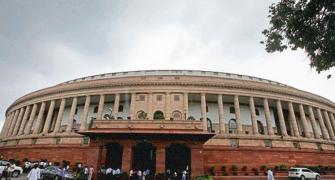