The Parliament, for the first time in its history, witnessed a reorganised seating arrangement as the monsoon session began on Monday with many members of Lok Sabha and Rajya Sabha sitting in each other's Houses during proceedings to follow the new COVID-19 protocols for maintaining social distancing. 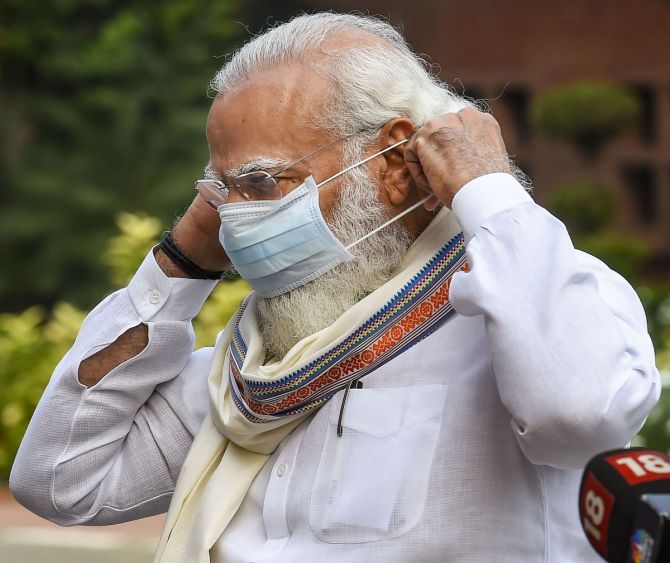 IMAGE: Prime Minister Narendra Modi during his address to the media before commencement of Parliament's Monsoon Session, amid the ongoing coronavirus pandemic, outside Parliament House in New Delhi, on Monday. Photograph: Kamal Singh/PTI Photo

The privilege of getting seated in either House was earlier enjoyed only by the Council of Ministers.

Some ministers were also seated in the galleries of both the Houses that were, along with the chambers, used to seat all the MPs in order to follow physical distancing norms.

IMAGE: Parliamentarians observe silence during an obituary reference in Rajya Sabha on the opening day of Monsoon Session of Parliament, amid the ongoing coronavirus pandemic, in New Delhi. Photograph: PTI Photo

With the normal seating arrangements disrupted, ministers were seen scurrying for seats in the Rajya Sabha chamber as the spaces generally allotted to them were reassigned to the others.

The monsoon session of Parliament started on Monday with the enforcement of unprecedented safety measures in the wake of the pandemic. 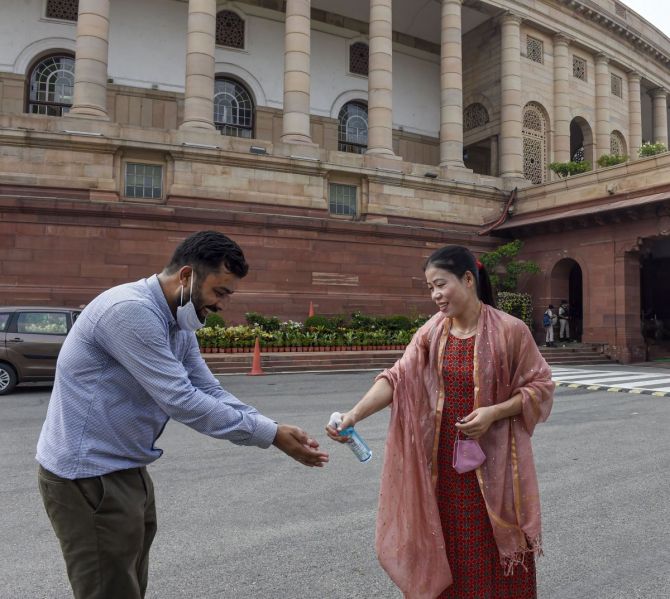 It is for the first time that chambers of both Lok Sabha and Rajya Sabha are being used along with their galleries to seat the MPs of both Houses to enable their functioning.

The monsoon session this year is being held in two different shifts -- Rajya Sabha will sit in the mornings and Lok Sabha in the second half of the day. 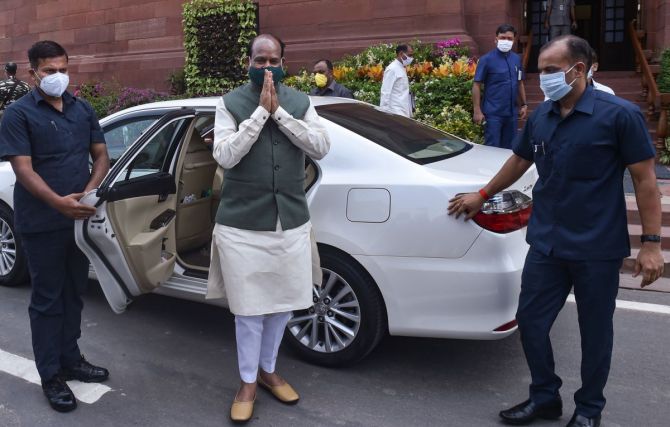 Speaker Om Birla said in Lok Sabha that rules and procedures have been eased to allow members to sit in both Houses to enforce social distancing norms.

A few lighter moments were also seen. Rajya Sabha Chairman M Venkaiah Naidu said some members had got the opportunity to sit in the Lok Sabha even without getting elected to the Lower House.

"The Rajya Sabha is Lok Sabha," he said while introducing the members who were selected in the panel of vice chairman, to assist the chairman and deputy chairman in running the House. 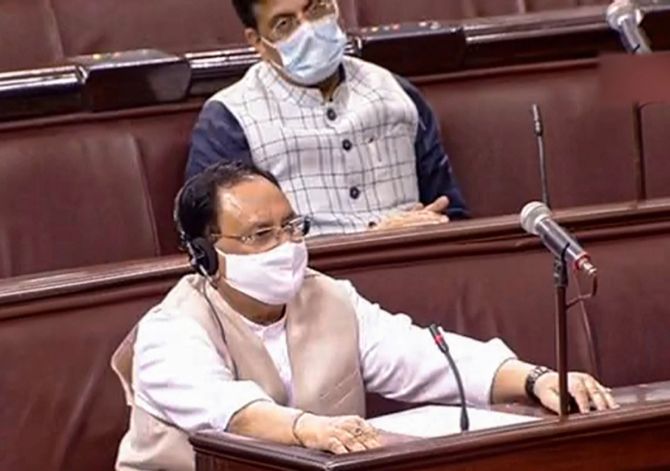 IMAGE: BJP MP JP Nadda in the Rajya Sabha during the opening day of Monsoon Session of Parliament, amid the ongoing coronavirus pandemic, in New Delhi. Photograph: PTI Photo

Birla said as part of the procedures, the chambers of the two Houses and the galleries where members were seated will be considered as part of Lok Sabha when the House proceedings are on.

He said members do not have to stand while speaking as part of the new procedures put in place to contain the spread of coronavirus. In a lighter vein, he said some may find
it difficult to speak while sitting. While nearly 200 members were present in the Lok Sabha chamber, a little over 50 were seated in the visitors' gallery located above the main chamber.

In the Rajya Sabha, some members said in good humour that MPs can now also add to their resumes that they were seated in Lok Sabha. 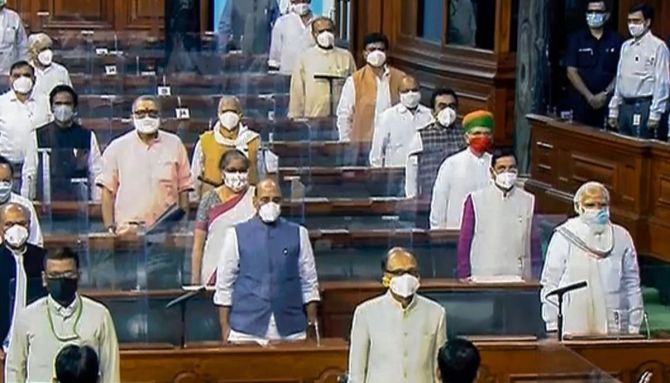 Prime Minister Narendra Modi, who came to the Rajya Sabha after Harivansh was elected as deputy chairman for the second time, lauded the arrangements made to make the session possible.

"I congratulate you and your team for the arrangements made," the PM said as he congratulated Harivansh for being re-elected as deputy chairman. 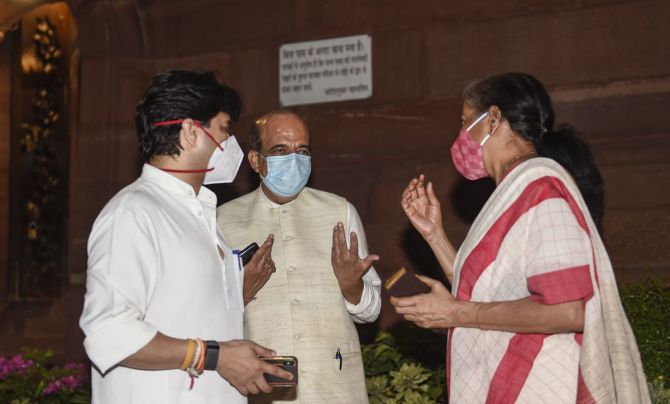 Members were asked by the Chairman to raise their hands before speaking and to speak while remaining in their seats, instead of the past practice of rising while speaking and even during the laying of papers.

Naidu also asked members to raise their hands and introduce themselves before speaking, as MPs had to locate fellow members who were not seated in their usual places.

The leaders of various parties were allowed to sit in the Rajya Sabha chamber as per the parties' strength. Only nine senior Congress leaders were seated in Rajya Sabha chamber. Former Prime Minister Manmohan Singh did not attend the proceedings on the first day. Interestingly, some opposition members expressed concern over how they would lodge their protest. Under normal circumstances, the protesting members would force adjournment

of the House by sloganeering or entering the well.

Giant TV screens were put up in both the Lok Sabha and Rajya Sabha chambers. In Lok Sabha, benches which usually accommodate six members had a numbered seating plan for only three.

Glass-like plastic shields of varied sizes were installed in the front and sides of benches to protect members from coronavirus in the Lower House. A few officials were seated in the officers gallery, which had separations made with plastic sheets to provide protection from the virus. The gallery which houses visitors
from abroad was used to seat Rajya Sabha reporters recording the proceedings.

Only a few media personnel were present in the press gallery and there were no visitors to witness the House proceedings.

Rajya Sabha Chairman asked members to take extra precautions and urged them not to visit the staff of Rajya Sabha secretariat seated in the well of the House. He also cautioned members Ravi Shankar Prasad and Jairam Ramesh to not move around in the House and isle after they left their seats.

The hustle and bustle during the session was missing on Monday amid unprecedented measures and restricted entry in the Parliament complex. 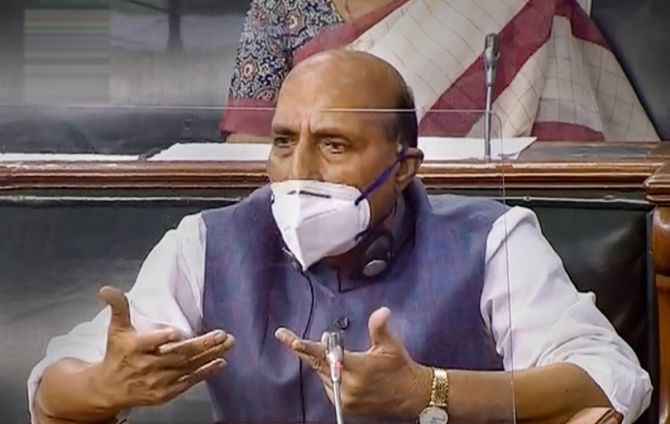 When the Lok Sabha met at 9 am, the number of members present was less but numbers went up when the House reassembled at around 10.20 am after a one hour adjournment after paying tributes to former President Pranab Mukherjee, a sitting MP and 13 former members who died in the recent past. 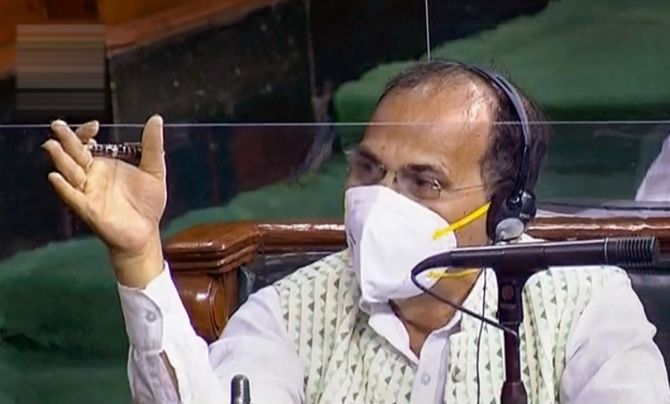 Unlike in the past, there were no Opposition protests in the well of both Houses, which is otherwise a usual occurrence on day one of the session as soon as the House assembles. As soon as the prime minister entered the House, he was greeted with applause and 'Bharat Mata Ki Jai' slogan. Modi greeted members, including those from the Opposition, with folded hands. 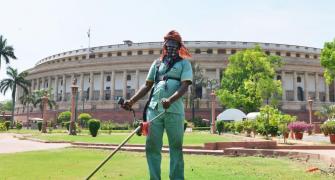 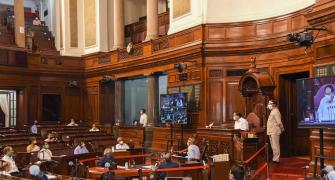 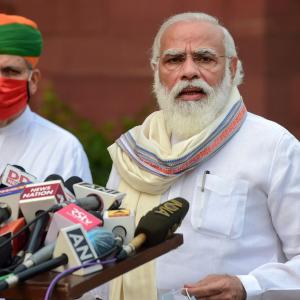 Hope Parliament speaks in one voice for soldiers: PM 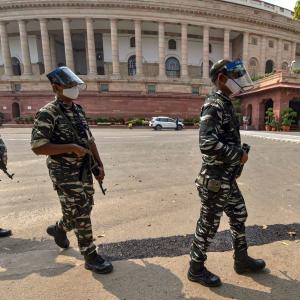