Govt needs to pay for sin of cutting down trees: Sena slams BJP on Aarey

Shiv Sena on Monday slammed the central and state government over the "murder" of trees in Mumbai's Aarey Colony. 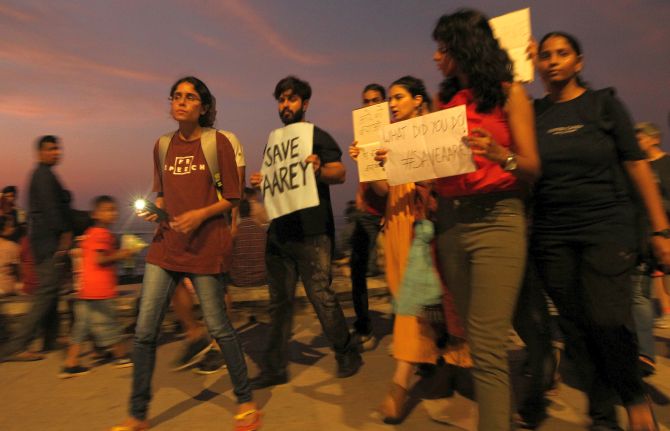 IMAGE: People hold placards as they march during a protest demanding that the Mumbai Metro Rail Corp Ltd not cut trees at Aarey to build a Metro parking shed. Photograph: Prashant Waydande/Reuters

Comparing the felling of trees in Mumbai's Aarey Colony with the blazing fire in the Amazon forest, Shiv Sena in its mouthpiece Saamana said that when the latter happened people broke down.

"Trees don't have the right to vote, so order should be given to 'murder' them. What kind of justice is this? If the movement to save the Aarey forest had taken place in a European country, in America, then how much praise we would have received for it. If there is a fire in a forest abroad, then people cry because of it, but the whole forest is being murdered in front of our eyes, neither the PM got emotional, nor was the CM worried for it," the party stated in its mouthpiece 'Saamana'.

The party went on to say that the "the way the Aarey issue is being oppressed, it is nothing but dictatorship".

The party added, "The government needs to pay for the sin of cutting down trees in night."

Shiv Sena stated that they are not opposing the development work, but are against the cutting of trees.

The Supreme Court has taken cognisance of the trees felling matter in Mumbai's Aarey Colony and said that a special bench will on Monday hear the petition submitted by a group of law students protesting the action by the authorities.

At least 29 protesters were arrested after they protested against the authorities cutting down treed in Aarey area following the orders of Mumbai high court. The protestors were later granted bail by a local court.

The protesters opposed the cutting of trees for the construction of the car shed of the metro station. They have demanded the relocation of the bus depot, which is a part of the Metro III project. SC to hear Aarey PIL on Monday; protesters get bail