The Centre justified in the Supreme Court on Monday the abrogation of provisions of Article 370 of the Constitution, which gave special status to Jammu and Kashmir, saying the militants and separatist elements, with the support of foreign forces inimical to India, were taking advantage of the situation. 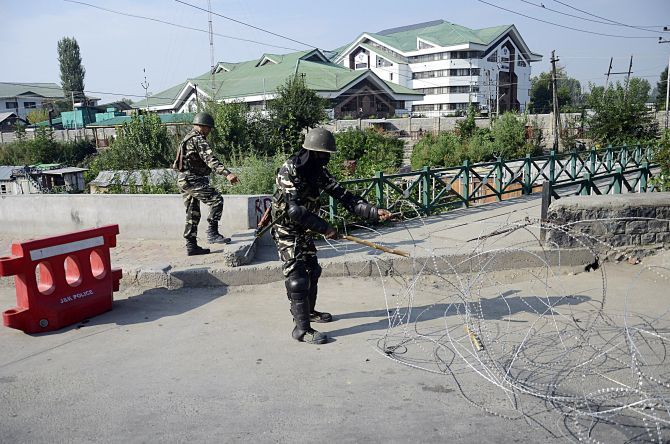 A five-judge bench of Justice N V Ramana, Justice S K Kaul, Justice R Subhash Reddy, Justice B R Gavai and Justice Surya Kant is scheduled to take up for hearing a batch of petitions challenging abrogation of provisions of Article 370 and Article 35A on November 14.

In its reply to the batch of petitions, the Centre said that Article 370, in its original form, was constitutionally described as a temporary provision with respect to Jammu and Kashmir, formed a part of the Constitution of India as adopted by the Constituent Assembly on November 26, 1949.

The Centre's affidavit said it was observed over the years that the existing regime under Article 370 of the Constitution, and the exceptions/modifications carried out to other provisions of the Constitution of India by Presidential Orders issued under Article 370(1)(d), were impeding, rather than enabling or facilitating, the full integration of the erstwhile State of Jammu and Kashmir with the rest of the country which was neither in the national interest nor in the interest of the State of Jammu and Kashmir.

"The militants and separatist elements, with the support of foreign forces inimical to India, were taking advantage of the situation and sowing discord, discontent and even secessionist feelings among the populace of the State," the affidavit said.

It said, "What is more, the residents of the erstwhile State were also being denied all the benefits of the rights guaranteed by the Constitution of India to all other citizens of the country."

The Centre said it cannot be disputed that the existence of Article 370 for over seven decades, in spite of it being merely a temporary provision, prevented the people of the erstwhile state of Jammu and Kashmir to receive benefits of evolving legal systems as even the amendment of the Constitution of India and other law of Parliament were not applicable to the said state creating a separatist mindset.

It said that accordingly, a decision was taken that it would be in national interest and in the interest of the security and integrity of the country, that the existing regime under Article 370 be discontinued.

"It was also decided that it would be essential that the entirety of the provisions of the Constitution of India be made applicable to the erstwhile State of Jammu and Kashmir, so that the said State and its people may enjoy the full protection of all of the provisions of the Indian Constitution as well as all civil/penal welfare legislations are made applicable," the affidavit said.

The Centre further said the abrogation of Article 370 provisions would also act as a catalyst for enabling the State to achieve its development potential to the fullest, and to provide to its people the best possible standard of living in an "atmosphere of peace, amity and tranquillity".

It said these constitutional decisions were effectuated strictly in accordance with the requirements of the Constitution of India.

The Centre further said that though judicial review is part of the Constitutional power of the court, the justification, efficacy, desirability and the wisdom of such decisions of the President as well as Parliament "is not amenable to judicial review".

"It is submitted that the sphere of constitutional challenge is to be limited to Part III of the Constitution and the pleadings of the petitioners with regard to the rationality or the wisdom of impugned decision/legislative measures, are to be rejected by this court," the affidavit said.

The petition was filed by Lok Sabha MPs Mohammad Akbar Lone and Justice Hasnain Masoodi (retd) on behalf of the NC. In 2015, Justice Masoodi had ruled that Article 370 was a permanent feature of the Constitution.

Several other individuals have also moved the apex court challenging the Centre's decision.

Justifying the abrogation of Article 35A, which accorded special rights and privileges to natives of erstwhile state of Jammu and Kashmir, the Centre has told the Supreme Court that the provision was discriminatory especially against women marrying outsiders and a serious obstacle to the socio-economic development.

It has been felt, over the years, that this regime has worked to the detriment of the state and has significantly contributed to the grave problems of "terrorism, militancy and separatism which plague it", an affidavit filed in the apex court by Gyanesh Kumar, additional secretary of the ministry of home affairs, said.

Article 35A became history on August 5 as a consequence of the Centre's decision to abrogate the provisions of Article 370 which had given special status to the erstwhile Jammu and Kashmir.

Incorporated in the Constitution by a 1954 Presidential Order, it accords special rights and privileges to the citizens of Jammu and Kashmir and bars people from outside the state from acquiring any immovable property in the state

It also denies property rights to a woman who marries a person from outside the state. The provision, which leads to such women from the state forfeiting their rights over property, also applies to their heirs.

The affidavit said the provision itself "proved to be a serious obstacle to the socio-economic development of the erstwhile state.

"It has prevented investments in the state, and adversely impacted job creation for the youth which again resulted in a cascading effect on other developmental indicators. It has led to a discriminatory regime against citizens of the erstwhile state from the rest of the country as well as a large number of residents...."

Highlighting the fact that once a woman marries an outsider, she loses the property rights, the MHA officer said, "I state and submit that women of the erstwhile state were also discriminated against if they chose to marry a Non-Permanent Resident."

In an oblique reference to Pakistan, the affidavit said, "the inimical forces from across the border have exploited the situation.... The growth potential of the erstwhile state was largely untapped despite large monetary support from the Government of India."

It said that the tourism potential has remained severely under exploited due to Article 35A and these factors have contributed to "fostering a separatist mind-set, which breeds militancy and terrorism, fuelled from across the border."

The Centre said that the erstwhile state has suffered huge loss of lives due to terrorism since 1990.

"The unfortunate situation prevailing on the ground affected not only the people of the erstwhile state but also the brave and dedicated members of the Armed Forces and the police forces, coming from different parts of the country, many of whom made the ultimate sacrifice in the course of the performance of their duties.