Sadanand Dhume, one of the rising stars in the Washington, DC, policy wonk circles, particularly among Conservatives, argues that while President Obama can take Indian Americans support for granted, their natural home should be the Grand Old Party

Sadanand Dhume, a resident fellow at the neo-conservative Washington, DC think tank, The American Enterprise Institute, and considered a rising star in policy wonk circles, particularly among conservatives, has argued that while President Obama can take Indian Americans support for granted, their natural home should be the Republican Party.

In an AEI paper titled, What is the Natural Political Home of Indian Americans, Dhume, a South Asia expert who writes about political economy, foreign policy, business and society, with a focus on India and Pakistan, noted that 'as we enter the home stretch of the presidential election, one group whose support President Barack Obama can apparently take for granted is Indian-Americans'.

He cited a recent Pew Research Center survey, where it was found that 65 per cent of the 2.85 million-strong community self-identifies as Democratic or Democratic-leaning.

Fewer than one in five see themselves as Republicans. In 2008, a whopping 84 per cent of Indian-Americans voted for Obama, one of the highest proportions of any ethnic group in America.

Dhume wrote, "For those accustomed to viewing politics through the prism of race -- with non-white minorities expected to line up robotically behind Democrats -- this may not seem surprising."

He added, "In fact, it's utterly illogical. Interests, values, and history all suggest that the natural political home for Indian-Americans is the GOP," and advised, "With a little effort and the right arguments, the Romney-Ryan campaign ought to be able to make inroads into a community that, though still relatively small in absolute numbers, represents the fastest-growing segment of America's fast-growing Asian-American population."

In a laundry list of arguments to lend credence to his contentions, Dhume said, "To begin with, the Indian American experience is proof, if any were needed, that America remains a land of opportunity."

"For all intents and purposes, the community is less than 50 years old -- Indians began migrating to the United States in significant numbers only after it opened its doors to non-Europeans in 1965 -- but it has already carved out space for itself at the heart of American life," he said.

Dhume noted, "Nor is this experience limited to a few outliers."

"Only 9 per cent live in poverty, compared to the national average of 12.8 per cent. And even if you step away from the doctors and software geeks, the archetypal Indian American figure is a striver: A motel owner in Florida, a newsstand worker in New York, or a taxi driver in California."

"To put it bluntly, this is not the natural constituency for the party of food stamps, affirmative action, and welfare without work," he said.

"If the GOP is the party of the nuclear family -- a Pew survey finds that 88 per cent of Republicans say they have 'old-fashioned values' about family and marriage, compared with just 60 per cent of Democrats -- then should it not also be the party of Indian Americans?" he asked.

On foreign policy, Dhume said, "Like most immigrants, Indian Americans ought to view their ancestral homeland in the rearview mirror, but this does not preclude wishing India well or working toward closer ties between Washington and New Delhi."

He however acknowledged, "To be fair to the Democratic Party, it is part of a broad bipartisan consensus that seeks a strong US-India relationship."

But he pointed out, "Nonetheless, it was a Republican president, George W Bush, who went the extra mile for India in 2005 by backing a landmark civilian nuclear accord. And in general, Republicans have greater clarity about the threats democracies such as India face from the rise of an authoritarian China and the resurgence of radical Islam."

"As for trade, suffice it to say that there is only one presidential candidate out there taking regular potshots at jobs outsourced to Bengaluru. It's not the guy who ran Bain Capital, "Dhume said.

He added, "India ought to inform the community's choices in a deeper sense, as well," and argued that, "The overwhelming majority of Indian-Americans are economic refugees who fled the wreckage of Nehruvian socialism for greener pastures."

Dhume took exception to the writings of another conservative, Indian American author Dinesh D'Souza, who has described Obama as a 'Kenyan socialist', calling it 'a needlessly inflammatory exaggeration'.

"But the president's faith in big government, ceaseless castigation of 'millionaires and billionaires,' and careless talk of 'social Darwinism' should give the jitters to anyone who has experienced firsthand the policies that flow from such rhetoric," he said.

Dhume acknowledged, "Needless to say, not all Indian Americans will be convinced by these arguments. That most live in reliably blue states such as California, New York, and New Jersey probably colors their perspective. Others have bought into a toxic culture of victimhood, despite the obvious fact that the overwhelming majority of Indian immigration came after the US experienced the great civil rights victories of the 1960s."

"Others still may simply prefer the gaudy identity politics of the Democratic Party to the GOP's quieter acceptance of all as Americans -- with an emphasis, in an era of hyphenated identity, on what comes after the hyphen. And, of course, those for whom gay marriage and abortion rights matter more than the fiscal deficit or a strong military have good reason to prefer blue to red," he said.

Dhume said, "For its part, the Republican Party could do a better job of reaching out. Though the two most prominent Indian American politicians in the country are Republicans -- Governor Bobby Jindal of Louisiana and Governor Nikki Haley of South Carolina -- many Indian Americans still seem more comfortable in the Democratic Party."

He recalled, "Two years ago, all five Indian Americans who ran for Congress (and lost) were Democrats. That both Jindal and Haley tend to wear their conversion to Christianity on their sleeves obliquely sends the message to some that the largely Hindu and Sikh Indian American community may not be entirely welcome."

But in the final analysis, according to Dhume, "These are trifles. By nominating a Mormon to run for the presidency, the GOP has punctured the myth that it belongs only to fundamentalist Christians. Moreover, no reasonable person can gainsay the fact that America's prosperity and proud tradition of religious liberty owe their existence to a society built on bedrock of Judeo-Christian values."

"Acknowledging this does not in any way reduce a community's space to practice its own faith," he said.

Dhume said, "To sum up, not much of substance tethers Indian-Americans to the Democratic Party," and predicted, "Once the community begins to view the world through the prism of interests, values, and history, it will soon discover that it belongs more naturally in the GOP." 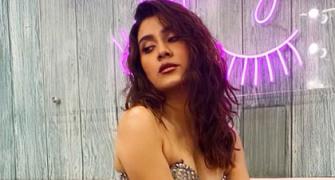