Asserting that it condemns any philosophy that praises Mahatma Gandhi's assassin Nathuram Godse as a patriot, the Bharatiya Janata Party on Thursday cracked the whip on its serial-offender MP Pragya Thakur, barring her from attending its parliamentary party meeting and axing her from a consultative committee on defence. 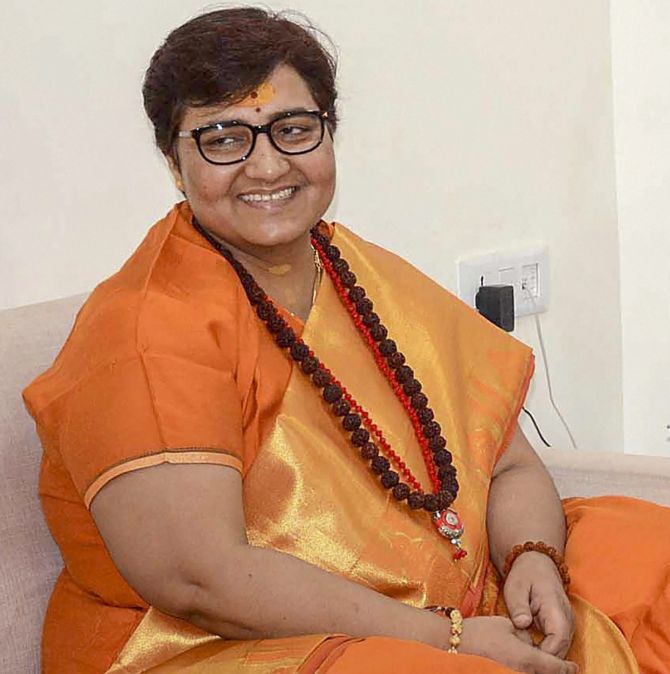 Thakur created a controversy on Wednesday with a comment, which Speaker Om Birla ordered not to be recorded, in Lower House during Dravida Munnetra Kazhagam member A Raja's narration of a statement by Godse before a court on why he killed Gandhi.

The saffron party's action against the controversial Hindutva leader with a history of making provocative comments, including praising Godse as a patriot, came as it worked to defuse the political crisis triggered by her latest provocation..

Former Congress president Rahul Gandhi said her remarks represent "heart and soul" of the BJP and its ideological mentor RSS.

BJP ally Janata Dal-United welcomed the saffron party's action against Thakur but its spokesperson K C Tyagi also demanded that the matter should be referred to Lok Sabha's ethics committee, noting that many members, including former prime minister Indira Gandhi, were expelled on its recommendations in the past.

Though it remains uncertain if the BJP will take further disciplinary action, the party has shown its intent to tighten the screw on her, who has left it red-faced time and again since its controversial decision to field her in the Lok Sabha election from Bhopal.

She remains an accused in the Malegaon blasts case.

She, however, insisted that her comments in Lok Sabha was against "insult" to revolutionary Udham Singh and said that "storm of lies becomes so big at times that even day appears to be night".

"Storm of lies becomes so big at times that even day appears to be night but the Sun does not lose its light. People should not be swayed by this storm. Truth is that I did not tolerate insult to Udham Singh yesterday," the Bhopal MP tweeted.

Earlier in the day, Nadda announced the BJP's action against her, saying Thakur's statement was condemnable.

"The BJP never supports such statement and we do not support this ideology. We have decided that Thakur will not attend meetings of BJP parliamentary party during the session," he told reporters.

In Lok Sabha, the defence minister stood up to condemn her remarks in a bid to pacify protesting opposition members after Speaker Om Birla's repeated exhortations went unheeded.

"Far from talking about Nathuram Godse being called a patriot, we condemn the idea of treating him as a patriot. His philosophy was, is and will remain relevant and he is as a guide (margdarshak) for the nation," he said.

Not satisfied with the response, the MPs belonging to the Congress, Trinamool Congress, DMK, Left parties, Nationalist Congress Party and All India Majlis-e-Ittehadul Muslimeen staged a walkout.

However, the Bahujan Samaj Party, the Biju Janata Dal, the Telugu Desam Party and the Telangana Rashtra Samithi members remained seated in the House.

Unlike on other issues, when they are often seen engaged in a verbal duel with the opposition, BJP members remained quiet during the opposition protests.

However, Prime Minister Modi had said the remarks made about Gandhiji or Nathuram Godse were very bad and very wrong for society. "She has sought an apology but I would never be able to forgive her fully," he had said.

"Nathuram Godse was a 'deshbhakt', he is and will remain a 'deshbhakt'. Those calling him a terrorist should instead look at themselves. They will be given a befitting reply in this election," the controversial leader had said while attending a roadshow.

The BJP had immediately got into damage control and distanced itself from Thakur's statement and asked her to tender a public apology.

She had also made disparaging remarks about IPS officer Hemant Karkare, who was killed in action against terrorist during the Mumbai terror attacks, and recently blamed "black magic" of opposition parties for death of senior BJP leaders Arun Jaitley and Sushma Swaraj.

The BJP leadership had repeated advised her to keep away from making controversial statements.